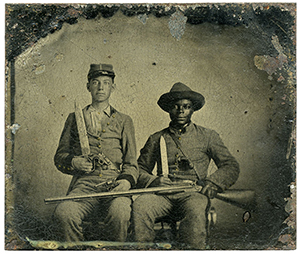 WASHINGTON (AP) – An enigmatic Civil War photo of a white man and a black slave, both in Confederate uniforms, has been donated to the Library of Congress five years after its appearance on Antiques Roadshow sparked speculation about its meaning.

Collector Tom Liljenquist of McLean, Va., donated the 1861 tintype after buying it from descendants of the white soldier earlier this month, The Washington Post reported in its Monday edition.

“It’s an image that historians have debated because of the discussions of whether or not African-Americans voluntarily served in the Confederacy,” Lonnie G. Bunch III, director of the Smithsonian’s National Museum of African American History and Culture said.

The slave holds a shotgun and a knife, but there’s no evidence he fought for the South, said Civil War photo historian Ronald Coddington, who researched the picture for his 2012 book, African American Faces of the Civil War.

Silas Chandler called himself a soldier’s servant on his successful application for a Mississippi state pension in 1916.

Coddington said it is one of the most important photographs to come out of the conflict.

“There’s not another image like it, in terms of having an identified soldier and identified servant, that you can track,” he said.

In the picture, Silas Chandler is in his mid-20s, and Andrew Chandler is about 17, according to records.

It raises the question: Why does a slave appear to be in arms against the crusade that would gain him his freedom?

Bunch said there is overwhelming sentiment that African-Americans who participated in the Confederacy were coerced.

“They were owned. They were enslaved,” he said.

Helena Zinkham, head of the library’s prints and photographs division, called it an extraordinary photograph.

“You look at those faces and you want to know more,” she said.

Liljenquist, who has turned over 1,200 Civil War-era photographs to the library, said he bought the photograph from descendants of Andrew Chandler on Aug. 15 and immediately gave it to the library.

He declined to say how much it cost or identify the owner. 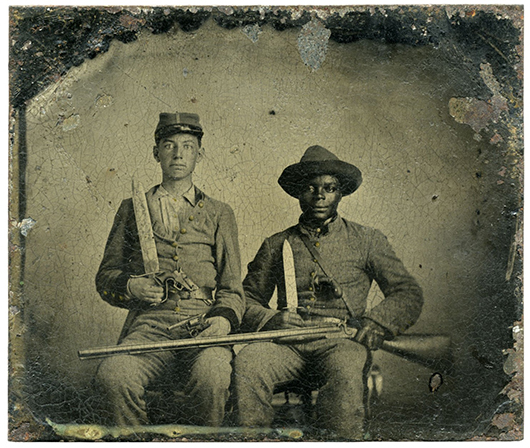