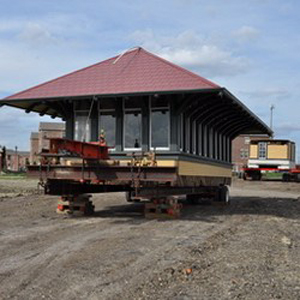 The Santa Fe Tower 19 was the first piece from the Museum of the American Railroad’s collection to be moved to the institution’s new location in Frisco, Texas. It took nearly 3 1/2 hours, with a motorcycle escort to help maneuver through city traffic, to move the structure from Fair Park in Dallas to the new suburban location. Image courtesy of Museum of the American Railroad.

DALLAS (AP) — The Museum of the American Railroad’s move from Fair Park to Frisco has been a lesson in patience these past 14 months. Logistics and paperwork played havoc with hopes of opening at its new home in 2012.

But that’s OK, say organizers, who point to the successful move so far of about half of the museum’s collection of historic and one-of-a-kind rail cars. The rest will move in the coming months.

And it’s thanks in large part to the many volunteers who put in countless hours not only to help with the move but also to continue some of its educational programs despite the museum’s being closed since November 2011.

“We could not have done it without their help,” said Bob LaPrelle, executive director of the nonprofit museum.

The railroad museum maintains a large exhibit at the Frisco Heritage Museum and sends volunteers into Dallas-area classrooms to teach about the math, science and technology involved in railroading.

There’s also plenty of work to do on the collection. While the country’s railroading history is romantic and glamorous, a lot of mechanical work on the trains is hot, dirty and exhausting, LaPrelle said.

A recent workday attracted a handful of men to help grease wheel bearings and axles on some of the remaining rail cars at Fair Park.

“I love the physical work,” said Dick Thompson, 67, who leads the Steam Team of volunteers prepping cars for the move. “I really like the fact that someday my grandkids will say, ‘Hey, my granddad worked on those things to help move them over here.’ That’s pretty cool.”

While most of the museum’s volunteers are retirees like Thompson, some younger train enthusiasts have also stepped up to help.

Seventeen-year-old Timothy McMillon has been volunteering with the museum for about three years. His duties have ranged from leading tours in Fair Park to running the gift shop.

“The staff are really good people,” said McMillon, adding that they helped steer him to study engineering in college once he finishes high school. “They treat each other like family.”

And while the museum isn’t officially open in Frisco yet, volunteers offered the first tours there during December’s Polar Express Pajama Party hosted by the Frisco Discovery Center, located next to the railroad museum’s new home.

Clint Tennill Jr., a trustee on the museum’s board, also volunteers as a conductor. Dressed in an authentic uniform, Tennill helps set the scene for rail travel decades ago.

“These used to be the most elite way to travel,” he said of the rail cars. “It’s living history.”

And it’s a history that Mike “Mad Dog” Dodson is learning more about. Dodson is a brakeman and qualified conductor for the Burlington Northern Santa Fe Railway Co. He got his nickname in the 1970s, when he started building track for the St. Louis-San Francisco Railway, nicknamed the Frisco.

“It’s pretty neat to be on the train pulling them and driving them up to Frisco and seeing the crowd there waiting on you when you shove them on the tracks,” he said.

The city of Frisco is contributing $1 million toward the $2.3 million cost of the move. The Frisco Economic Development Corporation also agreed to provide a loan for the move.

The move involves coordination among the various railways as well as the Federal Railroad Administration, which grants the permits. And that’s taken time.

The next group of locomotives is expected to head to Frisco any day now. The museum has three more moves after that. The Frisco No. 4501 and the Union Pacific Big Boy, the largest steam locomotive ever built, will be the last ones to make the trip to their new home. 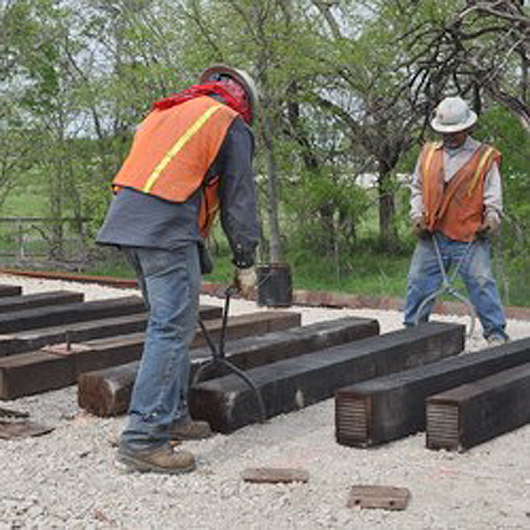 Track construction at the museum’s new site commenced last March. While the ties are new, the rail was recycled from the Santa Fe (originally Kansas City, Mexico & Orient) Line near San Angelo, Texas. The rail was produced by Colorado Fuel & Iron Mills in Pueblo, and the Gary Works in Gary, Ind., between 1918 and 1920. Image courtesy of Museum of the American Railroad.

Curator waits patiently for someone to open antique safe