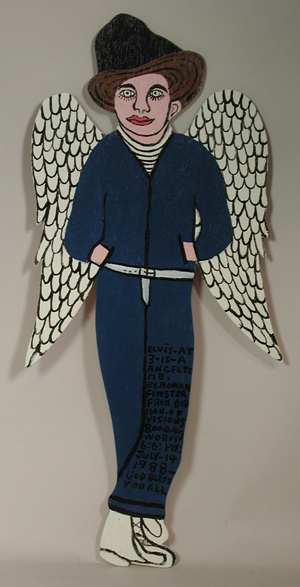 ‘Elvis Presley as an Angel,’ Howard Finster, 1988, Collection of the Tennessee State Museum.

NASHVILLE, Tenn. – The Tennessee State Museum has opened a special exhibition featuring the work of the late folk artist Howard Finster. The exhibition, “Stranger in Paradise: The Works of Reverend Howard Finster,” is free in the museum’s Changing Galleries and will be in place through Jan. 15.

A self-proclaimed “Man of Visions,” Finster was one of America’s most widely known and prolific self-taught artists, producing more than 46,000 pieces of art before his death in 2001.

Born in rural Alabama in 1916, Finster went on to become a preacher, tent revivalist, and “master of 22 different trades” before building his roadside tribute to inventors, the Plant Farm Museum. Later dubbed “Paradise Garden” by Esquire magazine, Finster’s rock-and-junk-encrusted wonderland was the focus of Finster’s life work.

In 1976, however, this focus shifted slightly. As he was using his hands to apply paint to a refurbished bicycle, Finster noticed that the paint smudge on his finger had created a perfect human face. A voice spoke to him, saying, “paint sacred art.” In response, Finster churned out thousands of sermon-laden artworks with subjects ranging from historical characters and popular culture icons like Elvis Presley to evangelistic fantasy landscapes and futuristic cities. Most works are meticulously covered in Finster’s own hand-lettered words and biblical verse.

Finster’s preaching experience and showman-like personality helped shape his public persona and ever-increasing celebrity. To spread his vision beyond “Paradise Garden,” Finster began to design record album covers for rock groups such as R.E.M. and Talking Heads. Interviews, films, along with his legendary appearance on The Tonight Show with Johnny Carson further advanced his career.

The industry of active promotion and prolific production which pervaded Finster’s daily life came to define his final years. Though he continued to create many fine works, some critics felt that the quality of his work suffered.

However, Finster’s intentions remained true to his inner voice—to make sacred art. Well-known yet frequently misunderstood, his position remains uncertain, suspended somewhere between awe for his tireless, faith-driven creativity and reluctance by the art community to accept his place in contemporary art.

“Stranger in Paradise: The Works of Reverend Howard Finster” is curated by Glen C. Davies and organized by Krannert Art Museum, University of Illinois.

To accompany the exhibit, the Tennessee State Museum has produced an original documentary film entitled, Visual Voices of the South, which will have its debut in November. The film, which will serve as an orientation for visitors, includes one of the last-known interviews with Finster. Tennessee’s acclaimed self-taught artist, the late Bessie Harvey, is also shown. Many of the artists in the film are represented in the museum’s permanent collection.

The film addresses four critical artistic questions about self-taught art: What is self- taught art? Why is it collected? Why does the artist create it? And, why is it important? The State Museum Foundation’s board treasurer, Rich Roberts, who has amassed a significant personal collection of folk art, shot and donated some of the documentary’s essential footage for the film and was instrumental in underwriting a substantial portion of the project.

A 152-page hardcover, full-color catalog with essays by Jim Arient, N.J. Girardot, Phyllis Kind, and exhibition curator Glen C. Davies, will be sold along with other folk art items in the “Paradise Garden” gift shop. After viewing the exhibition, visitors will have the opportunity shop in the special store which will only be open during the run of the exhibit.

Guest curator Glen C. Davies will conduct a walking tour for on Dec. 3 beginning at 2 p.m. on Level D, the general public is invited to attend. 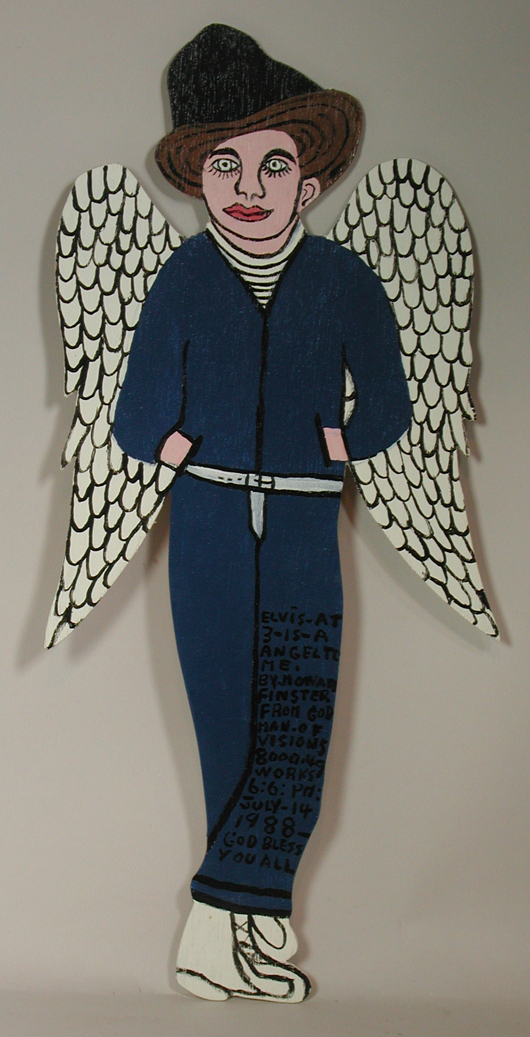 ‘Elvis Presley as an Angel,’ Howard Finster, 1988, Collection of the Tennessee State Museum. 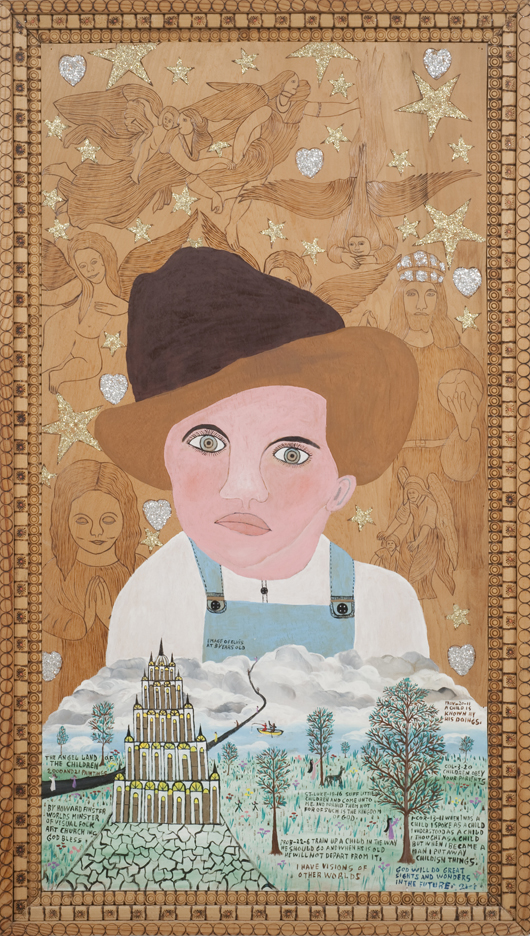 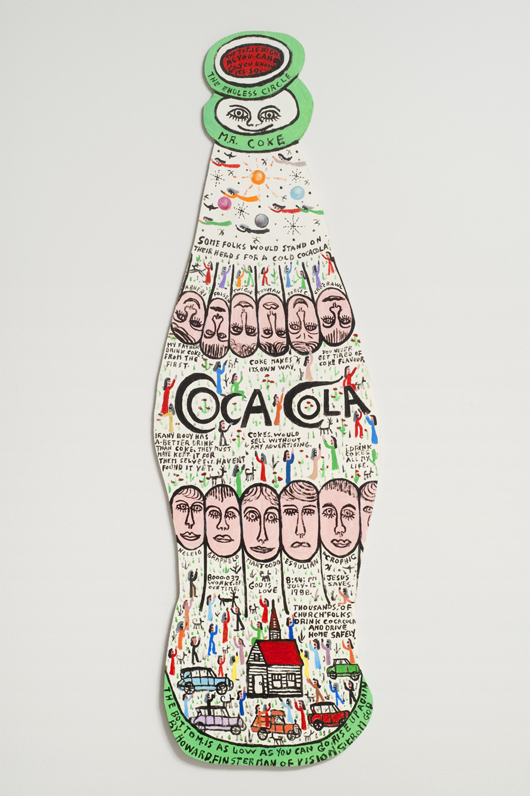 Painting found in beach house could fetch $800,000 at auction