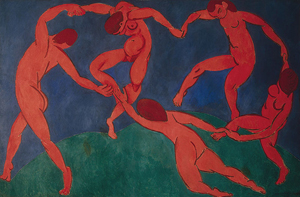 Henri Matisse’s ‘The Dance,’ 1910, at the Hermitage in St. Petersburg. Image courtesy of Wikimedia Commons.

MOSCOW (AFP) – Russia’s two greatest art museums were engaged Tuesday in an unsightly public feud over an idea to revive a Moscow museum of Western art that was shut down by Stalin in the late 1940s.

But it was closed on Stalin’s orders in 1948 as the Soviet authorities rejected anything reeking of “cosmopolitanism” in a drive to play up the importance of Soviet art.

Its collection was divided between the Pushkin Art Museum in Moscow and the famed Hermitage Museum in Saint Petersburg, where the pictures can be seen to this day.

The redoubtable director of the Pushkin Museum, Irina Antonova, 91, last week personally asked President Vladimir Putin during his annual phone-in with Russians to consider reopening the museum in Moscow with its original collection.

However the idea did not in the least impress the Hermitage museum, which under the plan could see some of its most prized Matisse, Degas and Picasso pictures transferred back to Moscow.

“This new attempt to break up the Hermitage is a crime against the stability of the whole museum landscape in Russia, whose unity and riches have been preserved with such difficulty,” fumed Hermitage director Mikhail Piotrovsky, quoted by the government Rossiyskaya Gazeta daily.

Antonova, however, launched a stout defense of her position saying the recreation of the museum was a question of “historical fairness.”

“The state destroyed this museum. The state has the chance to revive it. This is my opinion,” she said.

In response to Antonova’s request, Putin on Tuesday asked the government to draw up by June 15 a report on the viability of recreating the Western art museum in Moscow.

Putin had bluntly asked Piotrovsky on air during the live phone-in if he was “ready to return part of the (Hermitage) collection to Moscow and revive a museum of modern art.” But the Hermitage chief at the time ducked the question.

Morozov and Shchukin amassed two of the greatest collections anywhere of European art.

But like other private collections, their holdings were nationalized after the Russian revolution and used to form the basis of the Museum of New Western Art (GMNZI), which was founded in 1928.

Among the paintings transferred to the Hermitage after the Moscow museum’s closure is possibly its most single famous picture—the massive Dance by Henri Matisse which occupies an entire wall—as well as a priceless collection of early Picasso.

Piotrovsky ridiculed the idea that recreating the museum could have anything to do with historical fairness, describing the moves as showing a “primitive attitude towards national culture.”

The dispute has highlighted the rivalry between the Pushkin Museum and the Hermitage, with the much older Saint Petersburg institution keen to affirm its supremacy over the Moscow museum which was opened only in 1912.

In a statement explaining the background to the dispute, the Hermitage said the Museum of New Western Art’s collection had been divided up under an agreement between the directors of the two museums in 1948.

The paintings came to the Hermitage in compensation for hundreds of old master artworks taken from the Hermitage to Moscow in the 1920s by Soviet officials when the Pushkin museum was being expanded.

The Pushkin Museum at the time “showed no special interest” in the collections of Picasso and Matisse, the Hermitage noted icily. 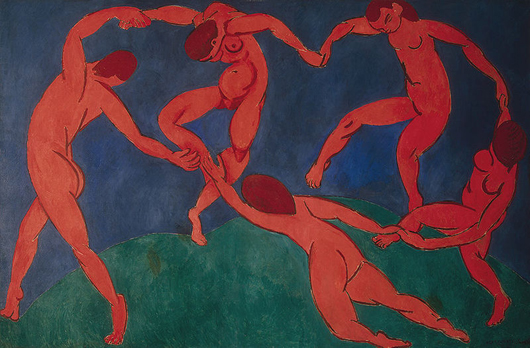 Henri Matisse’s ‘The Dance,’ 1910, at the Hermitage in St. Petersburg. Image courtesy of Wikimedia Commons.