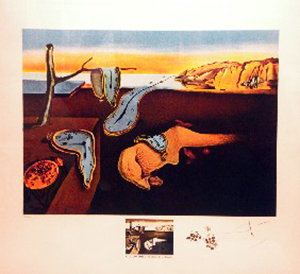 MADRID (AFP) – Madrid’s Reina Sofia Museum opens a major retrospective of works on Friday by Spanish surrealist artist Salvador Dali that explores how his experiments with painting, cinema and advertising have influenced art.

The exhibition features more than 200 paintings, sculptures, drawings, writings and television and film clips from the 1920s to the 1980s, including 30 works never before shown in Spain.

Dali is praised by some as a creative genius for his striking and bizarre images. However his TV ad campaigns and media stunts, such as burying himself in banknotes, led some critics to dismiss the mustachioed artist’s work as little more than marketing.

The star attraction of the exhibition is Dali’s best-known painting, the 1931 The Persistence of Memory, which depicts melting pocket watches.

Dali said the painting, on loan to the exhibition from the Museum of Modern Art in New York, was inspired by watching camembert cheese liquefying in the sun.

While the show, which runs until Sept. 2, focuses on Dali’s paintings, also on display are photographs, films and even a Lanvin chocolate ad which aired on French TV in the 1960s.

“Dali is an interesting artist because he always shifts between a great respect for the traditions of the great masters and an insatiable desire for all that is new,” said Montse Aguer, another curator of the show.

“Dali lived in an era when painting was inexorably destined to lose ground to other art forms like photography, cinema and conceptual art, and he dabbled in all of these.”

Among the films on display is the 1929 silent short film Un Chien Andalou, written with Spanish director Luis Bunuel, with its notorious scene of a woman’s eye being slit by a razor.

Another is Destino, an animated short Dali made for the Walt Disney Co., which was only released in 2003.

The exhibition was staged earlier this year at the Pompidou Center modern art museum in Paris.

Dali died in his native Figueres in Catalonia in northeastern Spain in 1989 at the age of 85.