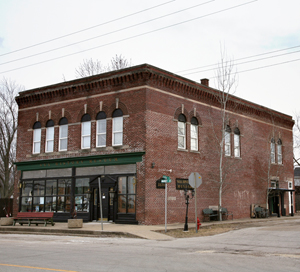 SADORUS, Ill. (AP) – If you must go down to the seas again, to the lonely sea and the sky, and all you ask is a tall ship and a star to steer her by … well, you’ll usually be out of luck in landlocked central Illinois.

Unless, that is, you book passage for the small burg of Sadorus, adrift in an ocean of corn and beans about 12 miles east-northeast of Bement as the seagull flies. Here, riding at anchor in a 132-year-old former store on Market Street, is the National Museum of Ship Models and Sea History, believe it or not.

How a museum of ship models and sea history winds up marooned 1,000 miles from the nearest ocean usually is question one for the occasional visitors as they come aboard and are greeted by their captain and museum owner, Charles Lozar.

“Actually, it’s kind of ironic, as we went to California, thinking we would do a ship model museum somewhere along the coast,” Lozar said. “We were in San Francisco, and there was a huge model museum there, and in the bookstore they had a book called Maritime Museums of North America. I flipped through it and found California actually had 39 maritime museums, so they probably didn’t need another one.”

An architect with a doctorate in urban planning who once taught at the University of Illinois, Lozar is familiar with navigating the Central Illinois landscape and knows a good harbor when he sees one. Back living in this area, he spotted the derelict circa 1878 store for sale in quiet Sadorus and, as he was looking for a place to moor his growing fleet of model ships and could easily handle the remodeling, thought why not?

“I needed a place with 14-foot ceilings because of the masts on the ships, and this building was also very, very cheap,” Lozar said. “I told the city of Sadorus we would have this place open in three months after we finished the interior, but it opened three years later, in 2002.”

Accomplishing anything good always takes time, however, and the jaw-dropping collection docked into every available bit of the 9,000-square-foot museum’s two floors is the result of 50 years of trolling the globe for treasures. Some of the most amazing stuff was bought while he was a student at the University of California at Berkley and got access to the studio back lots and the unwanted models that had had starred in movies from Hollywood’s glory years.

Sail the cramped byways of the museum, and you will discover the 11-foot-long Roman barge model used in the 1963 movie Cleopatra, starring Richard Burton as Marc Antony and, of course, Elizabeth Taylor in the title role. “If you rent the movie, the model is in the first scenes off the harbor of Alexandria,” said Lozar, who reveals a complex gear system inside the wooden vessel.

“They put the barge on railroad tracks under the water and, as it goes along, a gear rotates on an eccentric path and moves oars attached to hangers so the oars make a circular motion like people rowing,” he explained.

Anchored nearby is a ship model that was burned in a dramatic battle scene from the 1959 movie Ben Hur, starring Charlton Heston. Over there is a little tanker ship used in the 1970 Pearl Harbor movie Tora! Tora! Tora!, over here a spectacular, almost 12-foot-long Titanic used in promotional material from the 1997 Titanic blockbuster, the model ship precisely accurate, even down to the little lifeboats. “They could have used a few more on the real thing,” Lozar commented dryly.

We move on to a submarine model from the 1990 Hunt for Red October, a model of the British flagship HMS Victory from a 1938 movie about Admiral Nelson’s extramarital maneuvering with Lady Hamilton, and a Tugboat Annie Sails Again prop from an early movie starring Ronald Reagan. Tinseltown treasures are everywhere you look.

“With Universal Studios, for example, I had negotiated to buy the models they didn’t want anymore,” said Lozar, recalling happy days of plain sailing when the Hollywood execs hadn’t woken up to the fact these things were valuable bits of celluloid history.

The movie models are only a small part of the museum’s 300-strong fleet, however, which comes in all shapes and sizes. There’s a an 11-foot-long, 3-foot-tall model of a captured German World War II submarine built as a workshop exercise by sailors at the Navy’s Great Lakes Naval Training Station. And don’t miss the 100-year-old, 9-foot-long wooden scale model of a Dutch galleon, with a fine network of precise rigging that is a complex joy to the eye in all its meticulous detail.

Some models are tiny, such as the 7-inch-long re-creation of the British aircraft carrier HMS Illustrious, which has a sailor working on its decks who would stand barely knee-high to an ant. Other models are truly vast: How about a 27-foot-long scale replica of the ocean liner Queen Mary, made entirely of toothpicks? Lozar explained that the Chicago man who built it used a million toothpicks and had to construct it in three 9-foot sections.

“He built it in the living room of his sixth-floor apartment,” he added. “And he had to make sure he could get the sections out of the room. But he did such a nice job.”

Lozar’s patient wife, Ginger, has known her husband since he was 15, and even though he grew up on the west side of Chicago, she said the sea runs in his blood like a fever.

She said they sold all their furniture when moving from California to Central Illinois so there would be room to ship the models that were destined to find a home in the museum, which, by the way, is now listed in Maritime Museums of North America.

She said her husband loves history, too, and digested much of it while studying architecture. “And history is very much tied to boats and how people got around and discovered the world,” she added. “Charles has always felt a real close affinity to the sea; I don’t know that he wonders if he isn’t a reincarnated ship’s captain.”

The museum’s collection is divided into historical sections, ranging from the time of ancient Egypt through today. Ship models are supplemented by all kinds of related artifacts and antiques, some treasures dating to the 15th century. It’s a spectacular flotilla that Lozar hopes will let you hear the wind in the rigging and feel the swell of the ocean as visitors rediscover the courage of they who go down to the sea in ships.

“Capturing the wind in sails and knowing everything had to work right because your life depended on it,” he said, gazing at a model of a sailing ship in full sail. “It’s a fascinating endeavor.”