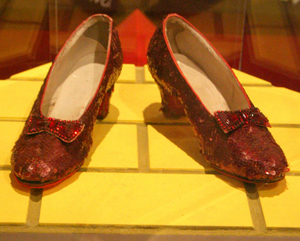 Dorothy’s ruby slippers from ‘The Wizard of Oz’ movie. This pair is on display at the Smithsonian’s American History Museum. This file is licensed under the Creative Commons Attribution-Share Alike 3.0 Unported license.

WASHINGTON (AP) –Dorothy’s ruby slippers from The Wizard of Oz have a new home with a diverse set of artifacts in a new timeline of American history that includes a piece of Plymouth Rock, a slave ship manifest, Alexander Graham Bell’s telephone and Kermit the Frog at the Smithsonian Institution.

The National Museum of American History opened the exhibit Thursday featuring iconic objects from pop culture along with items dating to the Pilgrims’ arrival in 1620 in Plymouth, Mass. “American Stories” will be a new chronology of U.S. history from the early encounters of Europeans and Native Americans to a Barack Obama campaign button written in Hebrew in the 2008 presidential election.

Dorothy’s famed shoes from the 1939 movie will help show the emergence of American pop culture and its significance in forming our shared memories. Mixing items from pop culture into a broader timeline is a big change for the museum. For more than 20 years, the slippers have been shown in a separate gallery of memorable items from the movies and entertainment history. Now they will join other items that explore the nation’s founding, growth and reforms, innovations and contemporary society.

“We’re so getting away from the time when history was all about white men on horses,” said Marc Pachter, the museum’s interim director. “This is a broader definition of what is important to remember.”

More than 100 objects are on display in the new gallery. Curators combed through the museum’s vast collection and acquired objects that help show how the peopling of America through immigration and the convergence of cultural traditions created a distinctive place, Pachter said.

This is the museum’s first major exhibit with a Spanish translation, which can be accessed online or with mobile smartphones. The museum also developed a mobile app with fuller descriptions of each object on display in English and Spanish.

Curators also are asking visitors to suggest objects that should be part of the American history collection. They can make suggestions in the exhibit or on the museum’s website.

“We know that there are millions of untold American stories out there,” Pachter said. “We will never tell them all, but we can do better in the range of what we collect and display.”

Near the start of the timeline layout is Plymouth Rock and its mythic place in U.S. history, along with wampum beads made from shells that were prized by American Indians for their value as trading currency. Nearby is Ben Franklin’s walking stick and three-piece silk suit worn at the Treaty of Alliance signing with France in 1778 during the Revolutionary War. The suit is on loan from the Massachusetts Historical Association.

An 1830s slave ship manifest from Alexandria, Va., was recently acquired by the museum and is being displayed for the first time. It records the sale of 83 enslaved Americans, their names and their descriptions to bring humanity to the horrors of slavery, said curator Bill Yeingst, who directed the “American Stories” project.

The timeline continues with President Abraham Lincoln’s gold pocket watch, an 1864 medal from U.S. Colored Troops, Bell’s Big Box Telephone from 1876, a baseball autographed by Babe Ruth around 1929, Jonas Salk’s polio vaccine in a vial from the 1950s, Roberto Clemente’s batting helmet from the 1960s, and an Apple II computer from the 1980s.

Some of the museum’s newest acquisitions expand the diversity of the collection, curators said. There is a prosthetic leg socket from a U.S. soldier wounded in 2003 during the Iraq war. Curators also collected a pink gown from a 2006 Quinceanera, a Latin American tradition of celebrating a girl’s 15th birthday as the transition to adulthood. Natalia Flores of Chicago, who is now 20, donated the gown to add a piece of Latina history to the Smithsonian.

“It’s my own American story here in America,” she said while visiting the museum Wednesday. “It’s a representation of many other stories of Latinas.”

The museum also is featuring a purse carried by Camilla Gottlieb that was filled with about 250 of her family’s life documents as they left their home in Vienna and were taken into concentration camps during the Holocaust. Eventually Gottleib immigrated to the United States. Her family later found the purse in a closet.

A newer relic in the collection isn’t so old but is already starting to show its age. The museum acquired a fourth generation iPod in 2004 from a young Washington resident to show the evolution of music technology from the 1950s to the 2000s. Pachter said an iPod from 2004 already is considered “ancient technology” and will have a place at the Smithsonian. 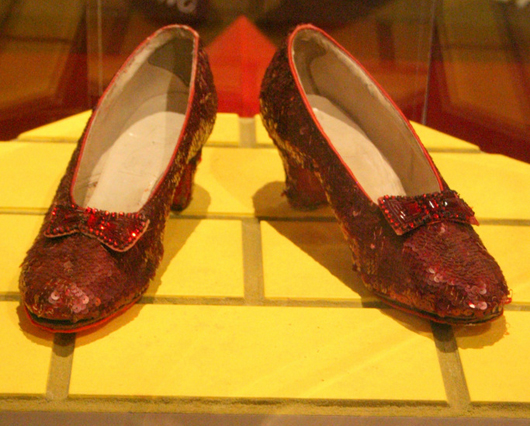 Dorothy’s ruby slippers from ‘The Wizard of Oz’ movie. This pair is on display at the Smithsonian’s American History Museum. This file is licensed under the Creative Commons Attribution-Share Alike 3.0 Unported license.