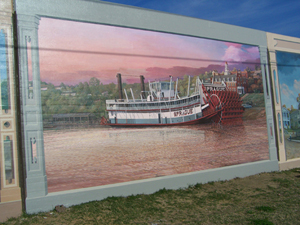 Mural of the Sprague painted on a Vicksburg flood wall. Nicknamed Big Mama, the paddlewheel tug was capable of pushing 56 coal barges at once. Image by Heironymous Rowe. This file is licensed under the Creative Commons Attribution-Share Alike 3.0 Unported license.

VICKSBURG, Miss. (AP) – The Old Court House Museum’s Sprague exhibit has received a donation of a model of the steamboat that sat at City Front for 26 years before burning in 1974.

The model, donated by Vicksburg native Ann Morris, is the new centerpiece for the display that includes artifacts from the boat.

Morris, along with her late husband, Jim, acquired the model from a Vicksburg model-builder, Frank Donovan, shortly after it was made in 1979.

Her husband, who operated the old Toys and Soldiers Museum before it closed in 1995, was an avid collector of models of Vicksburg landmarks and historical sites.

The Sprague, known in its heyday as The Big Mama of the Mississippi, holds a special place in her heart, she said.

While living in Houston, Texas, the Morrises traveled back to Vicksburg to attend a ballroom party on the steamboat and later to see Gold in the Hills, an 1890s melodrama first performed on a stage in the boiler room and continuing today at Parkside Playhouse.

Morris said the love of the history of the River City she shared with her husband was the reason she wanted to share the model with visitors to the museum.

“We were born and raised here, went to Carr Central and were high school sweethearts,” Morris said.

The model sat in their house for nearly two decades before Morris decided to donate it to the Old Court House Museum. After her husband died in 2001, she began selling most of the old Toy and Soldier Museum items that were filling up her house.

She contacted museum curator Bubba Bolm, hoping that he could find a place for the Sprague model.

“I decided it should be at the Old Court House,” Morris said. “When Bubba got it, he was tickled to death.”

Bolm said the models are good for the displays because they provide context that even hundreds of pictures cannot.

“We’ve got just hundreds of images of the boat but never had a model that was presentable,” he said. “This particular model is true to scale and a very good depiction. It gives people a good three-dimensional look at the boat and what it was like.”

The City of Vicksburg bought the 318-foot-long Sprague in 1948 for $1 from a division of Standard Oil. It remained at City Front on the Yazoo Diversion Canal for tourists and visitors until it burned April 15, 1974. Efforts to restore it eventually were scrapped.

“If you can’t see the real thing, a model is next best,” Bolm said. “This old museum is a repository for family history and the history of Vicksburg.”

Bolm said donations from residents with deep ties to Vicksburg have been the lifeblood of the museum since its opening.

“For the past 65 years, it’s been made up of donations from the family,” he said. “Everything in the museum is a donation, and Mrs. Morris has been very kind to us over the past years.”

Morris said it is important to her that museum visitors knew what the Sprague looked like and its prominent role in the culture and history of Vicksburg during the mid-20th century.

“It needed to be there,” she said. “That’s a very important part of Vicksburg history. They had the display of some of the artifacts from the boat, but in the back of my mind, I knew that’s where it needed to be.” 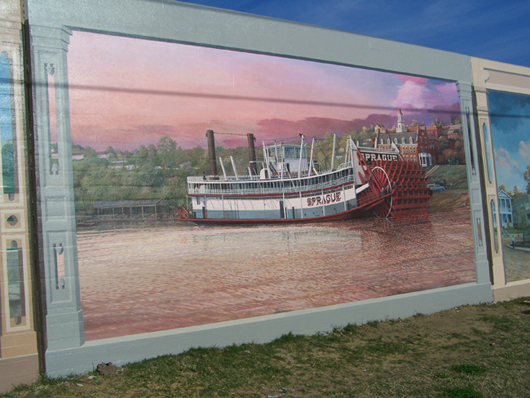 Mural of the Sprague painted on a Vicksburg flood wall. Nicknamed Big Mama, the paddlewheel tug was capable of pushing 56 coal barges at once. Image by Heironymous Rowe. This file is licensed under the Creative Commons Attribution-Share Alike 3.0 Unported license.

Glass-walled labyrinth to be installed at Kansas City museum