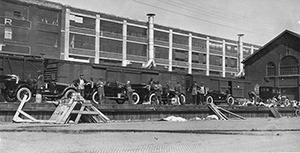 This circa 1910 photo shows workers preparing Studebaker automobiles prior to shipping on the company’s Main Street rail dock. Studebaker buildings #47 and #48 are visible in the background. They were torn down in the late 1980s. Image courtesy of Studebaker National Museum.

“Then and Now,” a photo exhibit now on display at Studebaker National Museum, allows museum visitors the chance to virtually “stroll” the streets of South Bend’s past, glimpsing urban scenes and landmarks of long ago, the South Bend Tribune reported.

Paired with each of the historic images is a present-day photo of the same scene, shot by local photographer Matt Cashore.

The 17 early images are taken mainly from the Studebaker Corp. archives photos, many of them marketing photos taken by the company showing new Studebaker vehicles on South Bend’s streets. Most of those images date from the early 1900s.

Sometimes the difference between then and now is stark.

The early images show a bustling industrial city, with many more houses, shops and other businesses in the downtown area. The present day photos show many more parking lots and vacant spaces.

A 1932 photo includes an Italianate home and a row of small businesses just north of the Michigan Street viaduct, where the Transpo transfer center lot now stands.

A 1910 photo shows a pickup baseball game in progress near Prairie Avenue and Chapin Street, where Studebaker later built its foundry. That land was cleared several years ago, and the present day photo shows vacant land at the spot that is now part of Ignition Park.

Local residents are familiar with the row of stately historic houses along Northshore Drive west of the Michigan Street Bridge in Leeper Park. In a 1910 image in the exhibit, a horse-drawn street sweeper is shown on the familiar-looking bridge. But there are few houses yet along that stretch of Northshore visible in the background.

Another horse-drawn wagon is shown in front of 212 W. Colfax Ave., which still stands and now houses Travelmore travel agency. The undated early photo says the building originally was the house of South Bend Mayor William C. George, but was remodeled in 1906 to become the offices of the Home Telephone Co. and later served as Elbel Brothers Music Store.

The exhibit allows visitors to get a glimpse of South Bend’s past, and perhaps plan for the future. “Then and Now” continues through Sept. 5.

Copyright 2014 Associated Press All rights reserved. This material may not be published, broadcast, rewritten or redistributed. 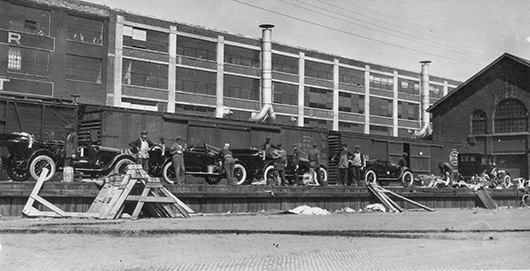 This circa 1910 photo shows workers preparing Studebaker automobiles prior to shipping on the company’s Main Street rail dock. Studebaker buildings #47 and #48 are visible in the background. They were torn down in the late 1980s. Image courtesy of Studebaker National Museum. 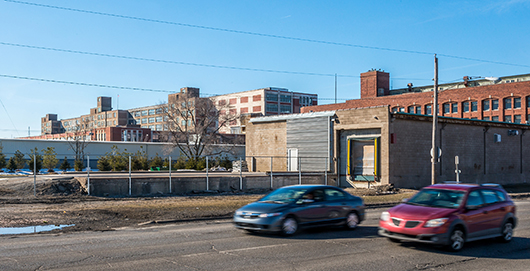 Although the rails have been removed, the elevated dock located just west of the 700 block of South Main Street remains today. With the nearby buildings gone, the former Studebaker Body Plant and Administration Building are visible in the background. Image courtesy of Studebaker National Museum. 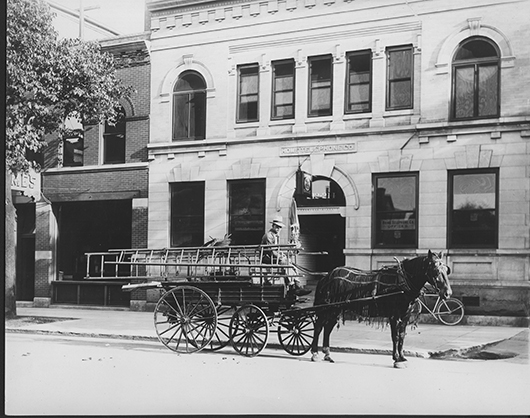 South Bend Home Telephone at 212 E. Colfax Ave. This building was originally the home of Mayor William C. George and remodeled in 1906 for the telephone company’s use. It remained in use by the telephone company until 1947. Image courtesy of Studebaker National Museum. 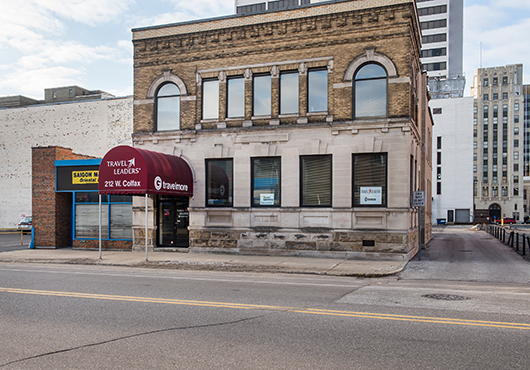 Today 212 E. Colfax Ave. is occupied by a travel agency, but the building looks much the same. Image courtesy of Studebaker National Museum.

Studebaker owners roll back to South Bend for annual meet