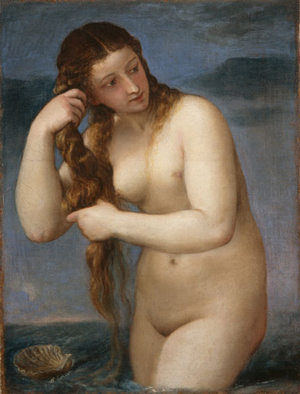 Someone painted a red swimsuit over Titian’s ‘Venus Anadyomene,’ on a billboard in Minneapolis. (National Gallery of Scotland). Image courtesy of Wikimedia Commons.

MINNEAPOLIS (AP) – A billboard for a Minneapolis museum has been replaced after someone spray-painted clothing and the word “Brrr!” in red over its depiction of nudity from a 16th-century Venus painting.

The advertisement is for the Minneapolis Institute of Arts’ exhibition of works by the Italian master Titian. The museum chose to feature the famous Venus Rising from the Sea painting on the billboard because “it’s very typical of paintings in the show,” said MIA spokeswoman Anne-Marie Wagener.

The graffiti was discovered on a billboard in Long Lake, a western suburb, last week. None of the other Minneapolis area billboards advertising the show have been damaged. The one that was vandalized has been restored to its previous condition, despite objections from museum officials.

But she said Clear Channel Outdoor, the company that owns the billboard, has a policy that ads with graffiti must be taken down so as not to encourage vandalism.

The billboards are slated to come down in mid-March.

The museum has fielded about 10 calls from angry passers-by who said they weren’t comfortable seeing nudity outside of the museum, said MIA marketing director Kristin Prestegaard. Some people said it forced them to talk to their children about nudity in art, a conversation they weren’t ready to have.

“It was the absolute of perfection,” she said. “I think it’s only now that people project certain ideas – but it’s art.”

The billboard raises the question of whether it’s acceptable to impose one’s culture and aesthetics on others, said Paul Rosenblatt, a family social science professor at the University of Minnesota.

“That art comes out of a particular culture,” Rosenblatt said. “I can really understand why there are plenty of people who, from their own cultural perspective, would be really uncomfortable.”

The classic paintings in the MIA exhibit – on loan from the National Galleries of Scotland – feature a number of Venetian women, religious figures, mythical Cupids and soldiers. The exhibit closes on May 1.

Wagener denied that the graffiti was a publicity stunt to attract attention to the exhibit, which she said is exceeding attendance projections.

“We’re not that creative,” she said flatly.

Nonetheless, both Prestegaard and Wagener said they think whoever did the graffiti was probably just trying to be funny, not censor the image.

It would be different “if the words ‘Brrr!’ weren’t there and they hadn’t given her such a nice, shapely swimsuit,” Wagener said. “I mean, if you were angry, why would you make it kind of pretty?” 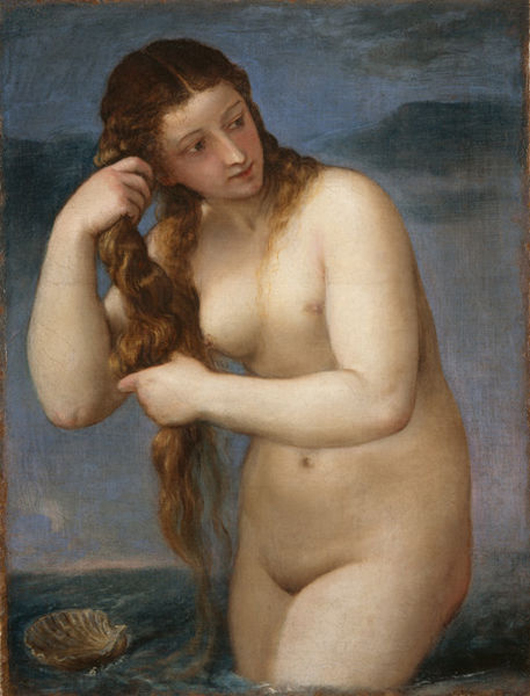 Someone painted a red swimsuit over Titian’s ‘Venus Anadyomene,’ on a billboard in Minneapolis. (National Gallery of Scotland). Image courtesy of Wikimedia Commons.