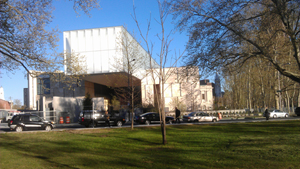 PHILADELPHIA (AP) — It has come down to this: Beth Lillis, 27, project coordinator for the Barnes Foundation, no time for breakfast, an iced coffee barely touched, carrying a cardboard box of light fixtures over the gravel outside the construction trailer and in through the thousand-pound brass-and-glass doors to the first gallery, where, at last, the Brooklyn-fashioned lamps are being hung, to illuminate, among other eye-poppers in their new home, Cezanne’s Card Players at their usual table.

It is a moment both thrilling in purpose (barely three weeks before the building opens to the public May 19, they’re literally waiting to turn on the lights) and mundane in practicality — the fixtures are but one more detail in an ambitious, audacious project where it seems that no detail has gone unexamined, undiscussed, unrevised, unperfected.

(“Prefer only one intermediate stitch per cushion,” project architect Philip Ryan wrote in red marker inside a little wavy red-marker cloud, another of his countless micro-instructions, this one on a shop drawing pinned to a wall of the trailer.)

“Those chandeliers going into the gallery is a big deal,” allows Bill McDowell, 54, the open-collared, sometimes hard-hatted project executive for the Barnes Foundation’s new Benjamin Franklin Parkway campus, who seems impossibly relaxed for a man who has until Tuesday to turn the building over to its staff.

Despite his demeanor, “it’s tense,” he says. “Every day is tense. I’ve never worked on a project of such good quality. These are all unique details.”

They are down to the last thousand or so of the 5,000 items on the Barnes punchlist. McDowell and staff have been waiting months for these hanging gallery fixtures to be finished. Cross that one off.

Lillis, who had a baby in the middle of coordinating the big move from suburban Merion to the Parkway, took three months off and returned 10 months ago, she said, to “twice as much responsibility on both ends.” But she’s unfazed by a job that inspires awe at its scope and envy of its venue. “My husband said this morning: ‘Oh you’re going to hang out in the gallery today. What a shame,'” she said with a smile.

The men in Cezanne’s The Card Players also seem unflustered in their new surroundings, still directly beneath the artist’s Bathers in a room that looks a lot like their home back in Merion, the scissor lift and the hard-hat guys hanging the light fixtures notwithstanding.

McDowell says the burlap wall covering is a slightly lighter color than the original (the burlap company that supplied Merion is no longer in business). About 98 percent of the 800 paintings had been hung by midweek last week, but a fair number of the 2,500 objects also moved from Merion — metalwork, chairs, chests, other furniture, African sculpture, redware, jewelry – still await final placement, said a besieged but cordial Andrew Stewart, director of public relations. Stewart is juggling media requests from down the street, across the country, and beyond, trying to find time to write news releases, like the one with details of the 1st and Fresh/Marc Vetri food-service operation in the building.

On this day, art handler/collections assistant Tim Gierschick, 35, is working from a series of photographs taken of the Merion galleries, making fraction-of-an-inch adjustments to the paintings and objects on the walls. Meticulous measurements were taken to ensure all art and objects are hung with the same eccentric placement favored by their collector, Dr. Albert C. Barnes, but Gierschick says it is only the eye that can make the final adjustments.

“We have copious measurements we can refer back to,” he said, glancing down at a photograph of a wall of Renoirs in Gallery 13, with black marker notes to move one painting down slightly, shift another corner up. (“Too high?”)

“You can always have new factors,” he said. “We’re working with historic objects. Not everything is square. The eye is kind of the last factor. You can level a wall to perfection, but it still might not look right.”

McDowell says the degree of attention to detail applied to the job by architects Tod Williams and Billie Tsien (known around the job site as “Tod and Billie”) is astonishing, and unprecedented in his experience. The couches for the court outside the galleries, delivered last week, have fabric on their bolsters that was woven in Senegal by special order. The wood floor is fashioned of ipe – a durable tropical hardwood – recovered from an abandoned section of the Coney Island boardwalk, in a herringbone pattern inspired by a church in Santiago, Chile, that Tod and Billie were visiting on an unrelated mission. They immediately sent word to change the straight running-board pattern (now found only in the elevator).

The reused Coney Island boards, part of a series of environmentally conscious steps that will lead to a LEED (Leadership in Energy and Environmental Design) certification for the building (hybrid cars get special parking spots), came in a variety of shades much broader than originally envisioned. But the architects decided to leave the variation, which gives the floor the character of a much older structure. “We’d prefer not to wait 300 years for the character to come out,” McDowell said.

Outside, where window washers clambered like spiders up and down the building’s sides, and the letters E and F in THE BARNES FOUNDATION lettering on the facade at 20th and Callowhill still had duct tape stuck to them, engineer Dennis McGeady was keeping things cool. Wearing Dickies work pants with a hole blown through one leg from his motorcycle exhaust pipe, he had one main thing on his mind.

“Temperature controls,” said McGeady, who was previously assistant chief engineer at the Philadelphia Museum of Art a few blocks away. “They’re within parameters, but not as steady as I’d like.” He rides his motorcycle 14 miles to work each morning and, to release stress, “on the way home I take a longer way.”

Inside, the head of security was inspecting those half-ton doors, which last week had the brass decorative insert installed on the left door but not the right. The insert, a geometric circle-and-rectangle pattern, was inspired by African design, in keeping with Barnes’ admiration for African art.

Building a home for art with as much glass and as many windows as this one is pretty much unheard of in the modern era, McDowell said. It invites complicated security and aesthetic concerns. But it also is intended to evoke the lovely estate feel of Merion, even as it provides better lighting; no longer will there be a glare on Cezanne’s Bathers.

The details go on and on. The color of the seats in the auditorium is “cognac.” The leather upholstery on the couches was changed from horizontal and vertical stitching with buttons to no buttons and only vertical seams. The limestone inside and out is from the Negev, quarried by Israelis, chiseled by Palestinians.

McDowell said he was concerned about how that would work, but the Israelis and the Palestinians got along great. (If only the stay-in-Merion and the move-to-the-Parkway Barnes factions could work out their differences as easily.)

In any case, the red maples lining the entrance walk were found after an exhaustive search of nurseries up and down the East Coast to find 18 of near-identical height and shape. They serenely looked lovely on this day, as workers finished caulking and lining the reflecting pools nearby.

McDowell says he thinks often of Barnes, the founder whose trust-indenture demands – that everything stay as he left it – were upended to bring the city to this moment.

In the last days at Merion, “he just seemed to be present. You can’t help but think, ‘What would he think of this?’ I think he’d like it. When he built the Barnes, it was a modern building; he employed modern technologies. He was desirous of new technologies.”

Even with everything still to be addressed – the stuck gate outside the gift shop, the wire plate covers still not in, lobby computers, and other technology awaiting installation, couches wrapped in plastic, Norwegian tapestries still being lifted from their wooden crates – McDowell says he is awed when he enters the old-Barnes galleries that the new-Barnes building houses, an inner sanctum open to only the high priests of construction, but soon to the world. 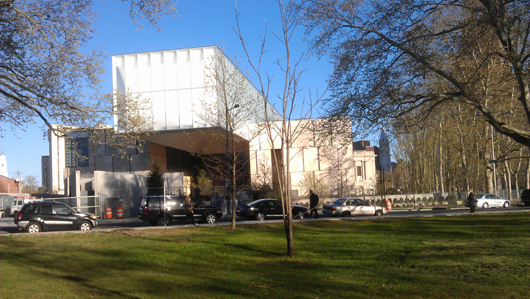 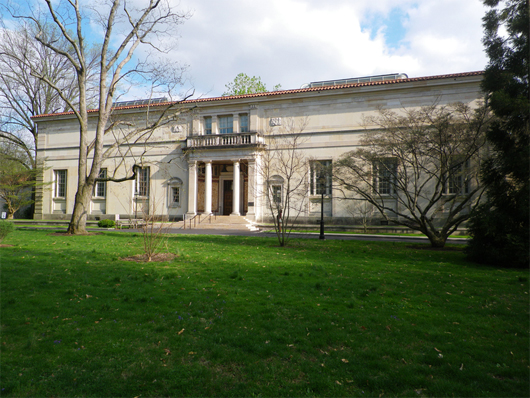