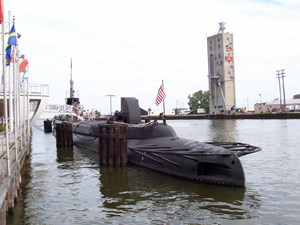 USS Cobia docked at the Wisconsin Maritime Museum in Manitowoc, Wis., where the vessel was built in 1943. Image by Royalbroil. This file is licensed under the Creative Commons Attribution-Share-Alike 2.5 Generic license.

MANITOWOC, Wis. (AP) – Kelly Brusky of Sturgeon Bay, Wis., sounded the dive alarm and shouted “Dive! Dive!” into the PA system in the control room of the USS Cobia submarine on a recent Saturday morning.

He and his wife, Rhonda, were part of the Wisconsin Maritime Museum’s USS Cobia Nook & Cranny Tour, led by guide Mike Johnson.

“I love World War II history,” Brusky told the Herald Times Reporter of Manitowoc. His wife came along “because she loves me,” he added with a laugh.

“We just wanted to get away for the weekend,” said tour member Ang Dralle of Milwaukee.

“We thought it would be interesting to see some history,” said her husband, Matt. “I’ve never been on a submarine before.”

The tour offers visitors a chance to see areas of the World War II submarine not seen on typical tours.

The fully restored USS Cobia, a National Historic Landmark, is very similar to the 28 submarines built by the Manitowoc Shipbuilding Co. during World War II. The sub was launched on Nov. 28, 1943. In June 1944, The Cobia began the first of six war patrols in which she sank 13 Japanese vessels.

As the tour group stood on deck, Johnson used an admittedly cheesy analogy, likening the submarine to a Coney Island hot dog.

The group peered down into an opening in the deck while he pointed out the ballast and fuel tanks, which make up the support system or “bun” of the submarine.

The “topping” is its teak-wood deck, designed for sure footing when it’s wet and to sink when parts of it are broken off in an attack so as not to give away the sub’s position, he said.

And just as any hot dog worth its weight packs a little heat with jalapenos and red onion toppings, the submarine has its three deck guns, Johnson said.

He also pointed out the sub’s T-shaped hydrophone or “underwater ear.”

“Sound travels very well under water. Depending on water conditions, you can hear another boat 300 miles away,” Johnson said.

In the forward torpedo room, visitors saw bunks where 14 to 17 men slept directly above or beneath the 201/2-foot torpedoes, each weighing as much as an automobile.

“There really is no such thing as personal space on a sub,” Johnson said.

About 80 men served aboard the sub during the war, typically staying out on patrol months at a time, he said.

Johnson opened the door to a closet-sized room that was the officer’s “head” or toilet, which was outfitted with pressure dials and control flaps and took 10 steps to flush.

“This is the 1940s … internal plumbing in a house was a novelty for these guys,” he said.

Among the unique parts of this tour was a visit to the conning tower, which Johnson described as the “eyes and ears” of the sub, where the captain would be stationed. The group climbed a ladder from the control room to get to it.

Among its many controls, the conning tower features “the oldest operational shipboard radar system in the world,” he said.

The men who served aboard the World War II subs had to be intelligent as well as physically strong and psychologically stable, Johnson told the group.

“You not only had to know your position, you had to know it blindfolded, in case you lost power,” he said.

They worked under difficult circumstances. The coldest area of the sub was the torpedo room, which was typically between 80 and 100 degrees. The hottest area was the engine room at 130 degrees with full humidity – that’s with the air conditioning on, Johnson said.

He could have added the word “brave” to his description of the submariners.

They were all volunteers, even knowing there was a 22 percent chance they would not come back, Johnson said. 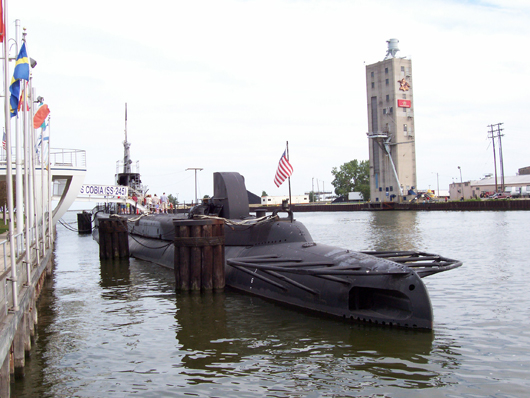 USS Cobia docked at the Wisconsin Maritime Museum in Manitowoc, Wis., where the vessel was built in 1943. Image by Royalbroil. This file is licensed under the Creative Commons Attribution-Share-Alike 2.5 Generic license.