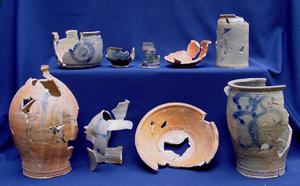 An assemblage of pottery made by American colonist James Rhodes, 1774-1784, from an exhibition that will run from Sept. 14, 2012 through Jan. 13, 2013 at Ellarslie, the Trenton (N.J.) City Museum. Image courtesy of the Trenton Museum Society.

TRENTON, N.J. – From Sept. 14, 2012 through Jan. 13, 2013, the Trenton Museum Society will present an exhibit at Ellarslie, the Trenton City Museum, highlighting the stoneware pottery of James Rhodes, one of the few known American stoneware potters of the colonial period.

The existence of James Rhodes and his distinctive wares has come to light over the past decade following the archaeological discovery of two kiln sites within the City of Trenton and some painstaking historical research into colonial documents. First, in the spring of 2000, a pottery kiln was discovered on the Lamberton waterfront during the construction of the Route 29 tunnel. Some 13,000 shards and pieces of kiln furniture (items used to help in stacking pots in the kiln during firing) were retrieved from this site. The kiln is still intact, buried beneath the tunnel roadway.

In 2005, a second kiln was found a mile from the first in the backyard of the Eagle Tavern property on South Broad Street during the city’s restoration of this local landmark. Hundreds more shards were recovered. Research into documents and analysis of the artifacts established a link between the two sites.

It is now believed that James Rhodes operated the waterfront kiln from 1774 until 1777, working for the prominent Philadelphia merchant, William Richards. Then, from 1778 until his death in 1784, Rhodes ran his own pottery-making business on a property adjoining the Eagle Tavern site (which later became part of the tavern property). Despite our knowledge of James Rhodes’ activities over the 10-year period he was in Trenton, virtually nothing is known of his earlier life.

The exhibit will explain the discovery of the kilns and the archival research, but will focus mostly on displaying the extraordinary variety of grey salt-glazed stoneware products made by James Rhodes. Many of the items on display are fragmentary, a result of their archaeological provenance. However, among the reassembled vessels, visitors can view plates, dishes, bowls, cups and saucers, tankards, jugs and pitchers, coffee pots, tea pots and ointment pots, along with numerous pieces of kiln furniture. Rhodes employed some signature decorative motifs that distinguish his products from those of other potters – floral designs and rough geometric patterns, executed in naturalistic style in painted cobalt blue — but perhaps his most engaging trait was the quirky application of molded faces onto the shoulders of some of his jugs and pitchers.

On Sept. 30 at 2 p.m., Richard Hunter will present a brief lecture to coincide with the exhibit on James Rhodes, a stoneware potter who was active in Trenton for 10 years at the time of the American Revolution. Rhodes, whose output is known from the recovery of pottery assemblages from two recently excavated kiln sites in Trenton, is a mysterious figure. How he arrived in Trenton, where or when he was born, or where he learned his trade are not known. The lecture will provide an introduction to the exhibit, explain the historical and archaeological background to Rhodes’s pottery making activity in Trenton, and set Rhodes within the broader context of colonial American stoneware.

For more information, contact the Trenton Museum Society at 609-989-1191 or e-mail tms@ellarslie.org. 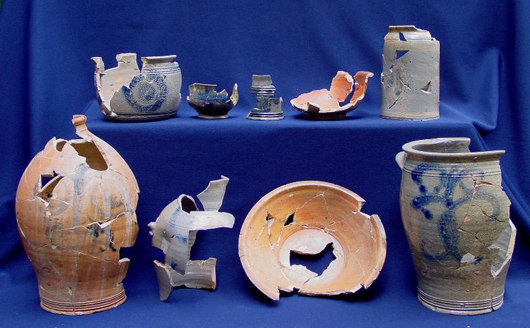 An assemblage of pottery made by American colonist James Rhodes, 1774-1784, from an exhibition that will run from Sept. 14, 2012 through Jan. 13, 2013 at Ellarslie, the Trenton (N.J.) City Museum. Image courtesy of the Trenton Museum Society.