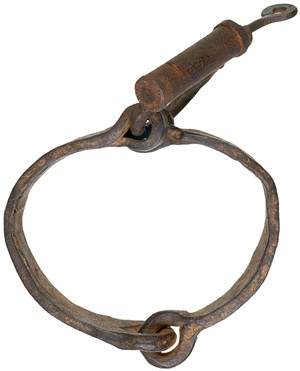 An iron collar and lock are haunting reminders of America’s role in the slave trade. Image courtesy of LiveAuctioneers Archive and Early American History Auctions.

According to the Richmond Times-Dispatch papers filed Wednesday in U.S. Bankruptcy Court say the museum has more than $3 million in debts and that after bankruptcy proceedings, no funds would be available to creditors.

Museum organizers originally planned to build in Richmond but chose Fredericksburg in 2002 when the city offered Wilder 38 acres along the Rappahannock River.

The museum was supposed to open by 2004 but was never able to raise sufficient funds. No work on the site has been done since 2007.