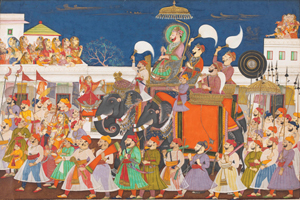 RICHMOND, Va. – This spring, the Virginia Museum of Fine Arts will present the only East Coast opportunity to explore the art and material culture of India’s maharajas (“great kings”) from the early 18th century to the mid-20th century. Maharaja: The Splendors of India’s Great Kings, is an international touring exhibition organized by the Victoria & Albert Museum, London, that opens at VMFA on May 21 and continues through Aug. 19, 2012.

Through the experience of seeing more than 200 objects spanning three centuries, visitors will be immersed in the rich and intriguing world of India’s royal courts. Many of the objects are drawn from the V&A, and the majority is from its unrivaled colonial-period collections.

“Visitors will get a behind-the-scenes glimpse into the private lives of some of the world’s greatest and most legendary royals,” VMFA Director Alex Nyerges said. “Three centuries of elaborate jewelry, ornate weaponry, fascinating artwork, royal costumes and photographs will be on display. Maharaja is the first exhibition of its kind to delve into these kings’ unique culture. The museum’s South Asian and European decorative arts collections further illustrate the rich artistic tradition of this era.”

Set against a backdrop of the tumultuous changes of the early 18th century through the 1940s, the exhibition takes visitors on a tour of Indian kingdoms during eras of shifting political powers. A richly appointed throne room, a saddle carried by an elephant, a horse-drawn carriage of enameled silver, a throne sheathed in gold and numerous paintings are some of the objects that will aid in animating the courts of India’s kings. Visitors will learn of the institution of Indian kingship through an exploration of the many roles – political, religious, military, and cultural – played by the ideal ruler. Through the art and objects made for the royals, the exhibition will trace the ways in which the maharajas adapted to the profound historical changes occurring during their time – from the waning of the Mughal Empire, through the rise of the British hegemony to the eve of Indian and Pakistani independence.

Ram Singh II, the ruler of Kota, a small state in northern India, rides proudly on a richly adorned elephant through the streets of his capital. His high status is shown by his radiant green halo, his parasol, and the attendants who wave ceremonial fly whisks around him. A dancing girl entertains him by performing on a platform mounted on his elephant’s tusks. Other attendants and musicians follow on foot, and the women of the city watch from balconies and rooftops.

This spectacular turban ornament (sarpech) consists of a feather-shaped upper part (jigha), worn vertically, and a headpiece (sarpati) worn horizontally. Traditionally at the Mughal court, only the ruler was entitled to wear a turban ornament. By the 1700s, such ornaments were given as symbols of royal favor to select noblemen, a convention that spread rapidly throughout the royal courts of India. This ornament of gold, diamonds, rubies, emeralds, sapphires and pearls was given in 1757 as a token of appreciation to Admiral Charles Watson by Nawab Mir Jafar who had been installed by the British as the new ruler of the eastern Indian state of Murshidabad.

This throne, decorated with richly worked sheets of gold, belonged to Ranjit Singh, the most powerful of the Sikh maharajas, and attests to the legendary magnificence of his court. Its distinctive cusped base is composed of two tiers of lotus petals (ancient Indian symbols of purity and creation), while the octagonal shape is based on Mughal furniture styles. The British victory over the Sikh kingdoms in the years following Ranjit Singh’s death was a triumphal event. This throne and other valuable treasures, including the famed Koh-i-noor diamond, were taken to London as symbols of British supremacy over the powerful Indian ruler.

The ritual of the grand royal procession remained an important public display of power and status during the period of British rule in India. The traditional elephants were still used, but European modes of transport, such as this landau carriage, became increasingly popular. Maharaja Bhavsinhji II, ruler of Bhavnagar, commissioned this carriage from the Fort Coach Factory in Bombay (now Mumbai) in 1915. The whole structural framework is covered in silver, and the enameled decorations of flowers, birds and butterflies are masterpieces of technical skill.

Educational programs will include a family day event, Celebrate the Art of India Family Day on Saturday, May 26, 1 – 4 p.m.; A Teen Talent: Status, Power, and Identity for students grades 6-12 on Friday, May 25, 6:30 – 8:30 p.m.; and “Samosa Saturdays” on Saturdays, June 9, July 21, and August 4 featuring Indian afternoon tea and a lecture. A six-session art history class, The Art of India, by Kerry Lucinda Brown, PhD candidate, VCU Department of Art History, will begin on Tuesday, April 17 from 1-2 p.m.

VMFA possesses one of the country’s premier collections of Indian art, which Maharaja: The Splendors of India’s Great Kings will complement. More than 300 objects represent the length and breadth of the Indian Subcontinent and more than 3,000 years of its history. The collection, installed in four galleries in VMFA’s McGlothlin Wing, showcases the diversity of the regional cultures and religious traditions that have defined India’s artistic production throughout the centuries. Especially popular are a gilded silver elephant saddle and an elegant white marble garden pavilion.

The Sydney and Frances Lewis Collection of Decorative Arts also has noteworthy Art Deco objects related to examples in the exhibition.

• HOTEL PACKAGES: Hotel and travel packages are in development and will be posted at http://www.visitrichmondva.com/Plan/Hotel-Packages

• SPONSORS: Exhibition organized in collaboration with the Victoria and Albert Museum, London. The exhibition is supported by an indemnity from the Federal Council on the Arts and the Humanities. Additional support provided by the E. Rhodes and Leona B. Carpenter

Foundation. The Banner Exhibition Program at VMFA is made possible by the Julia Louise Reynolds Fund.

About the Virginia Museum of Fine Arts:

With a collection of art that spans the globe and more than 5,000 years, plus a wide array of special exhibitions, the Virginia Museum of Fine Arts (VMFA) is recognized as one of the top comprehensive art museums in the United States. The museum’s permanent collection encompasses more than 23,000 works of art, including the largest public collection of Fabergé outside Russia and one of the nation’s finest collections of American Art, Art Nouveau and Art Deco. VMFA is home to acclaimed collections of English Silver and Impressionist, Post-Impressionist, British Sporting and Modern & Contemporary art, as well as renowned South Asian, Himalayan and African art. In May 2010, VMFA opened its doors to the public after a transformative expansion, the largest in its 75-year history. Programs include educational activities and studio classes for all ages, plus fun after-hours events. VMFA’s Statewide Partnership program includes traveling exhibitions, artist and teacher workshops, and lectures across the Commonwealth. VMFA is open 365 days a year and general admission is always free. For additional information, telephone 804-340-1400 or visit www.vmfa.museum. 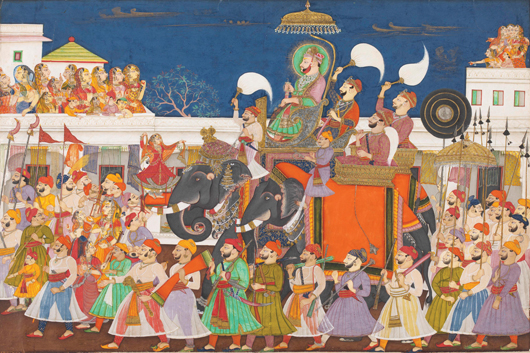