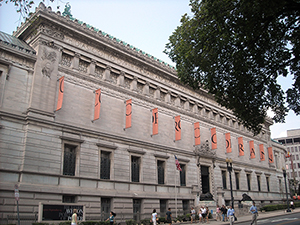 The Corcoran Gallery and School of Art at 17th and New York Avenue NW in Washington. Image by AgnosticPreachersKid at en.wikipedia. This file is licensed under the Creative Commons Attribution-Share Alike 3.0 Unported license.

WASHINGTON (AFP) – The oldest and largest private museum in Washington, the financially troubled Corcoran Gallery of Art, will be taken over by the government-backed National Gallery of Art under a proposal announced Wednesday.

In a joint statement, the two cultural institutions said they were in talks that envision the National Gallery of Art assuming initial responsibility for the Corcoran’s priceless collection of some 17,000 works of art.

The museum’s 19th century premises just steps from the White House – and in need of major renovations – would meanwhile go to George Washington University, which would also take over the Corcoran College of Art and Design.

The proposal aims to keep the Corcoran open to the public and its collection – featuring works by Claude Monet, Pablo Picasso, Edward Hopper and Willem de Kooning – in Washington.

Founded by banker William Corcoran in 1869, the museum has been grappling with deficits for years, prompting talk that it might relocate to a larger, less expensive venue.

The proposed collaboration would safeguard and increase access to the Corcoran’s collection as a resource for the public in Washington, maintain the historic Corcoran building as the renovated showplace for exhibitions of modern and contemporary art, and strengthen and elevate the Corcoran College and its programs. The announcement said the collaboration would also raise the stature of arts education in Washington and expand the benefits, services and interdisciplinary opportunities that both the National Gallery of Art and GW provide to students, museumgoers, and the Washington community.

The proposed arrangement among the three prominent Washington institutions comes as the culmination of a five-year effort by the Corcoran’s Board of Trustees to preserve the 17th Street building as both a museum space and a home for the college and to ensure the future of the Corcoran collection. Due to the challenges faced by the Corcoran, its board has sought to achieve these goals by exploring collaborations with other cultural and educational institutions.

“This coalition among our three institutions will open important new possibilities for Washington, D.C.,” said Peggy Loar, the Corcoran’s interim director and president. “The Corcoran’s great cultural, educational, and civic resources that are at the heart of this city will not only remain in Washington but will become stronger, more exciting and more widely accessible, in a way that stays centered on the Corcoran’s dedication to art and mission of encouraging American genius and opens the galleries free to all. We are deeply grateful for the bold imagination of the boards of all three institutions for working to make this outcome possible.”

The terms stipulate that the Corcoran would continue as a nonprofit organization, committed to its original mission: “Dedicated to Art and Encouraging American Genius,” continuing its 145-year history of pursuing and supporting new art and new ideas. The Corcoran would support the National Gallery of Art’s and GW’s stewardship of the Corcoran name and legacy, consult with and provide advice to the National Gallery and GW on programs and interconnected activities, and promote the important role of contemporary art and artists in provoking new thinking and realizing exciting new cultural initiatives. 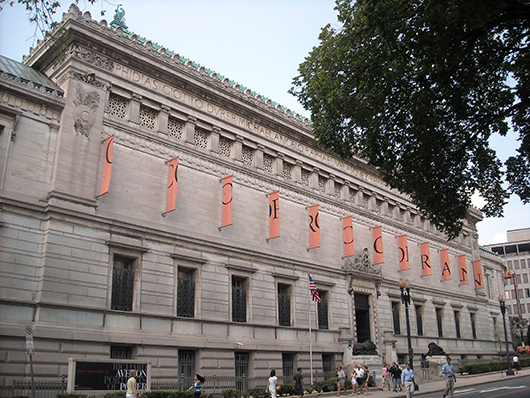 The Corcoran Gallery and School of Art at 17th and New York Avenue NW in Washington. Image by AgnosticPreachersKid at en.wikipedia. This file is licensed under the Creative Commons Attribution-Share Alike 3.0 Unported license.