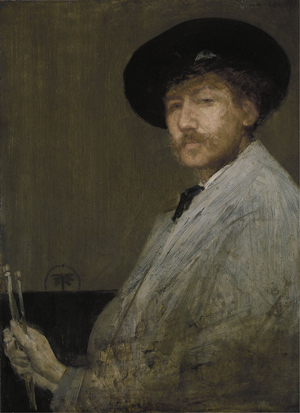 ‘Arrangement in Gray: Portrait of the Painter’ (self portrait, circa 1872), Detroit Institute of Arts. Image courtesy of Wikimedia Commons.

ANN ARBOR, Mich. (AP) – An exhibition of more than 100 prints by James McNeill Whistler at the University of Michigan Museum of Art is the largest collection of the 19th-century American artist’s work to be displayed there in more than 15 years.

Now best known for his iconic painting popularly known as Whistler’s Mother, the artist’s etchings and lithographs drew him renown during his lifetime. The three-month show spans Whistler’s career, and includes prints of scenes from London’s port and Venice’s canals, as well as intimate portraits of family members and himself.

“The themes, effects that he’s moving towards in painting are finding their way into print,” said museum curator Carole McNamara. “His prints, of course, were popular … before the paintings really caught on.”

Stanley Weintraub, the author of 1974’s Whistler: A Biography, noted that the artist had a two-sided career: His prints were commercially accessible while he lived, but relatively few of his paintings were marketable.

“They were among the masterpieces of the time,” Weintraub said of Whistler’s prints.

On Beauty and the Everyday: The Prints of James McNeill Whistler opened Saturday and runs through Nov. 28. Most of the works – and most of the Ann Arbor museum’s Whistler holdings – came from Margaret Watson Parker, whose 1936 bequest to the museum included Whistler’s prints and an extensive Asian art collection.

That interest brought her in contact with Charles Lang Freer, a Detroit industrialist and the founder of the Smithsonian Institution’s Freer Gallery of Art, which claims the world’s greatest collection of Whistler’s work. Freer collected the work of Americans including Whistler and later expanded his collection to Asian art.

Whistler, who was born in Lowell, Mass., left for Europe when he was 21 and spent the rest of his life there.

Arrangement in Grey and Black, No. 1 – also known as Whistler’s Mother – is owned by the Musee d’Orsay in Paris. It was displayed at the Detroit Institute of Arts as part of a Whistler show in 2004.

Parker began collecting Whistler’s works before his death in 1903 and bought collections that became available afterward, McNamara said. The University of Michigan Museum of Art’s Whistler collection includes nearly 200 works by the artist, but they’re rarely shown in large numbers because of their susceptibility to damage from light exposure.

In 1994, the Whistler display at the museum included about 80 highlights. This time, the exhibition is more extensive – filling a large second-floor gallery that was renovated as part of the museum’s $41.9 million expansion and renovation.

“This is exactly the kind of space that Whistler would have loved to have his work shown in,” McNamara said.