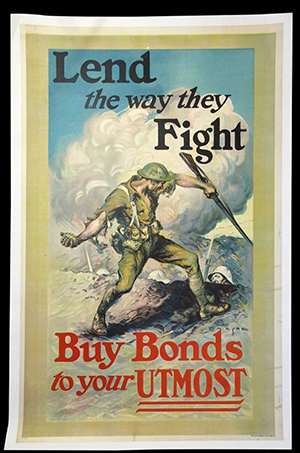 World War I poster by artist Edmund M. Ashe, 1917, which will be sold at auction Aug. 10. Image courtesy of LiveAuctioneers.com and Louis J. Dianni LLC.

SHREVEPORT, La. (AP) – A century after it started, World War I, the Great War, and for a generation the “War to end all wars” will be commemorated with an exhibit at Shreveport’s R.W. Norton Art Gallery.

“I don’t know why I’m fascinated with World War I,” said Lewis Norton, whose maternal grandfather, Maxwell Lewis, fought in the conflict but rarely spoke of it. That, plus what Norton was able to learn as an inquisitive child, only made the war all the more intriguing and, as he learned more of it, soul-shattering.

“It just seems so damned sad. A whole generation lost in Europe, the British Empire broken. All this over some family squabble, and then the whole thing just sets up for World War II. Are you kidding me? It just seems so pointless.”

Starting with an initial showing of 25 to 30 items, the exhibit will show, through spectacularly colorful and striking posters – the main visual medium in an age before radio, television and the Internet – the propaganda that set the minds of the citizens and soldiers on both sides. The posters, as well as uniforms and weapons used by combatants, will change each year of the exhibit to mark the progress of the conflict.

The posters were acquired by Norton over the past 12 to 14 months, and many are one-of-a-kind, or close to it.

One in particular, “Enlist!,” was found in the possession of a private owner who had two. Norton convinced the collector to part with one, which now can be seen by the public for the first time.

Today, the subject of the poster would not shock people. It shows the rather peaceful looking, but still clearly drowned and dead bodies of a mother and child, presumably in the interior of a torpedoed ocean liner, such as the RMS Lusitania. The sinking of the British liner in 1915, which killed 128 Americans – including a mother and daughter from New Orleans – almost drew the United States into the war. It wasn’t until April 1917 that this country finally jumped into the fray.

But in an era when posters and even ads in newspapers showed German atrocities such as babies impaled on bayonets, the image of the mother and child rankled the censors who rigidly controlled what the public saw.

“The poster was withdrawn,” Norton said.

The display also includes several German war posters, many patriotic or sentimental but from the point of view of the enemy, meant to stir patriotism or raise money for war loans. Visitors also will be able to view trench art soldiers, called doughboys or “Sammies” after Uncle Sam, crafted from what was at hand.

In addition to the posters and display items from the Norton’s gun and uniform collections, the show will feature facsimiles of newspapers and documents showing wartime life in Shreveport and northwest Louisiana, sharing the stories of area men who gave their lives in the trenches of France.

“From the three-volume Great War Memorial book, I found about 32 men from Bossier-Caddo who died in the war,” Norton researcher Gary Ford said.

“He was in Company 317 of the Sanitation Train, 92nd Division,” Ford said. One document states that his mother desires not to have his body shipped back. It lists her name as Mary Sylvester.

“A form Grave Location Blank says he was buried 1 July 1918 in grave number 191 in Brest. In another document, sent 8 July 1918 to the quartermaster general in Washington, it speaks of traumatism, May 23rd, crushing, Herbert L. Sylvester. He was wounded severely,” Ford said.

The research turned up history Ford and the gallery wish could be more fully explored. At the National Personnel Records Center, Ford learned a local woman went on a 1930s pilgrimage to war graves in Europe.

“The name of the program was American Pilgrimage. Likely, during that hard time, it was a public-private effort,” Ford said. “This sounds similar to the Eagle flights getting the World War II veterans up to the memorial in Washington. I really want to look into this more.”

Although almost 175,000 Americans died in the conflict, little comprehensive information is available about many of these, unlike the people lost in World War II, Korea, Vietnam and more recent wars.

“World War I fascinated me because it changed the human race,” Norton said. “Do you know that before World War I, policemen in Paris still carried swords? The world was different.”

The exhibit will enter its second phase May 7, 2015, the centennial of the Lusitania sinking. Special programs throughout the four-year observance will highlight children’s educational programs, music, fashion and other facets of life before 1920. George Theofiles, owner of Miscellaneous Man of New Freedom, Pennsylvania, and the world’s leading expert on poster art of the 19th and early 20th centuries, also will come to speak.

Broadcaster Tom Brokaw coined the term “Greatest Generation” to cover those who grew up during the Great Depression then fought World War II.

But for Norton, the term better describes “the World War I guys who, as boys, sat on their porches and listened to the old men talk of Shiloh, Cold Harbor, Gettysburg, Indians and gunfighters in the Old West – hard lives lived in hard times, and then, as young men, went over to die by the tens of thousands in the trenches of Europe.

“Afterward, they came home, made a life then had to fight the same damn war all over again in the same place in World War II with even greater casualties,” Norton said. “Also, many of the men we have interviewed in the museum’s oral history project talked of the Great Depression and how difficult those years were.

“But, again, they were mainly just boys in the 1930s. It was up to their World War I veteran fathers to find and work a job to keep their families alive. Furthermore, I can only imagine what these men thought witnessing the birth of military aviation as they were chasing Pancho Villa down in Mexico in 1916 to watching Lindbergh cross the Atlantic, Hiroshima and the moon landing in 1969. And everything in between. What a ride their lives must have been,” he said.

Information from: The Times, http://www.shreveporttimes.com 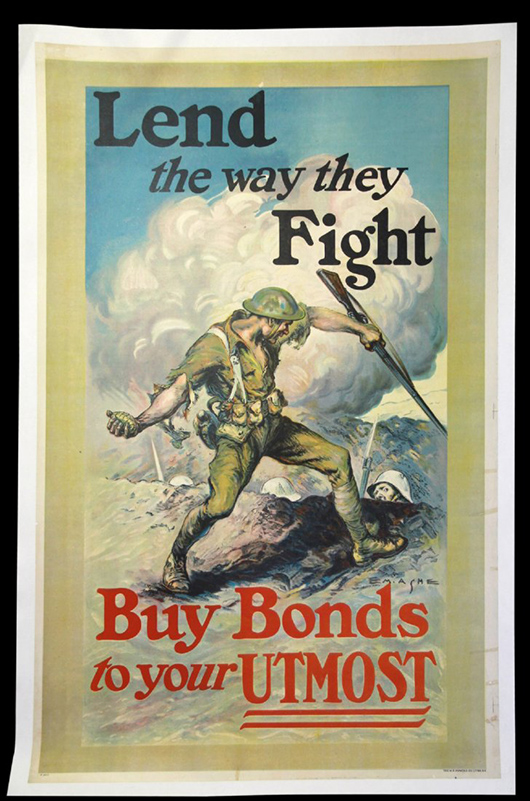 World War I poster by artist Edmund M. Ashe, 1917, which will be sold at auction Aug. 10. Image courtesy of LiveAuctioneers.com and Louis J. Dianni LLC.