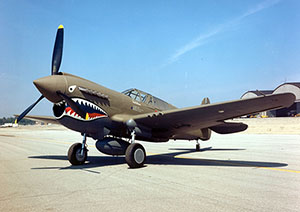 NEW ORLEANS (AP) – New Orleans will get a flavor of one of the most heralded episodes of World War II when a Curtiss P-40 Warhawk, restored in the shark-nosed markings of the famed Flying Tigers, goes on display at the National World War II Museum.

The aircraft, a P-40E model, is the kind flown by the 1st American Volunteer Group formed in China by Gen. Claire Chennault shortly before the United States entered the war. However, this one never flew for the Tigers; its service was limited to the Aleutian Islands.

Thousands of P-40s were produced during the war and supplied to U.S. allies in every theater. Most were scrapped as advanced fighters such as the P-51 Mustang became available. Today, P-40s are rare.

Having any P-40 is important in telling the Tigers’ story, said Nell Calloway, a granddaughter of Chennault, who organized U.S. volunteer pilots in 1941 as a civilian adviser to the nationalist Chinese government of Chiang Kai-Shek.

“Because the relationship between China and the United States is so important, we have to do whatever we can do to try to remember that airplane and how they used that airplane to contribute to defeating the Japanese,” said Calloway, director of the Chennault Aviation and Military Museum in Monroe.

Chennault, a Texas native who grew up in Louisiana, resigned from active U.S. duty in 1937 to become an adviser to Chiang. He designed airfields and a warning network “of people, radios, telephones, and telegraph lines that covered all of Free China accessible to enemy aircraft,” he wrote in his autobiography. He retired as a U.S. Air Force lieutenant general. He died in 1958.

Japan, which had moved aggressively in China since 1931, stepped up its attacks in 1937, and full-blown war broke out.

The museum’s P-40 was painted to match the shark-faced aircraft flown by Robert Lee Scott Jr., commander of the 23rd Fighter Group created by Chennault when the Flying Tigers were brought into the U.S. Army Air Force after the United States entered the war.

Chennault wrote in Way of a Fighter that he never knew why the public dubbed his group the “Flying Tigers” when the planes were painted with a shark nose copied from a Royal Air Force squadron.

The Tigers found fame in the air and on the silver screen. The 1942 film Flying Tigers put a swashbuckling John Wayne in the cockpit of a shark-nosed P-40 blasting away at Japanese aircraft.

The museum’s P-40 has the shark face but is painted with the modified fuselage logo designed for U.S. service: a tiger bursting through a star with a torn Japanese flag and Uncle Sam hat, said Rolando Gutierrez, chief engineer of Flyboys Aeroworks, the San Diego, Calif., company that restored the aircraft.

The museum’s curators began searching for a P-40 in 2004, said Tom Czekanski, director of collections and exhibits.

“We knew we wanted it to represent the Air Force in China-Burma-India, so it would be a Flying Tiger – the shark-mouth paint,” he said.

Czekanski wouldn’t say how much it cost to buy and restore. Lafayette oilman and philanthropist Paul Hilliard, a World War II Marine, provided a big chunk of money, he said.

Buffalo, N.Y.-based Curtiss built more than 14,000 P-40s of various models from 1939 to about 1944, but high-performance aircraft such as the Mustang, Republic’s P-47 Thunderbolt and the Vought F4U Corsair outclassed the Warhawk by 1944.

Adding to the P-40’s scarcity is that after the war, enthusiasts snapped up surplus high-performance aircraft for air racing and private piloting. But the P-40 found little demand.

The museum’s P-40 was shipped to Cold Bay in the Aleutian Islands, where it had fewer than 20 hours of flying time when it was scrapped after a taxiing accident in 1942.

“The fields were very muddy, and often the plane would dig in. Then it would flip end over end,” Czekanski said.

“We came to this a little late in the collecting game,” Czekanski said. “Early on, people were collecting planes that were in service or parked and saved. As the supply goes down, people go to greater and greater lengths to get them.”

The Warhawk will be the 10th aircraft installed in the museum, though only one can still fly, Czekanski said.

Gutierrez said the P-40’s engine, landing gear, some castings and most of the instruments are original, but most of the plane had to be built from scratch in a 72-week effort using copies of more than 3,000 original drawings provided by the Smithsonian Institution and 4,000 pages of ground-crew manuals.

The aircraft was shipped by truck to New Orleans. Eventually it will be lifted into the second floor of the museum’s Campaigns of Courage pavilion. 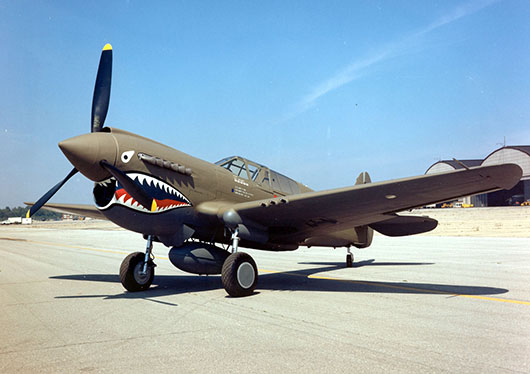