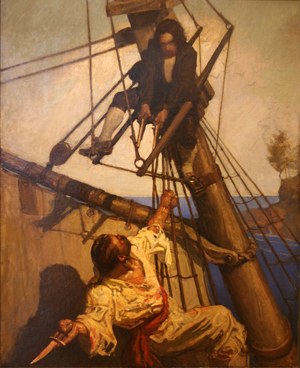 ‘One more step, Mr. Hands, and I’ll blow your brains out!’ Illustration by N.C. Wyeth for the 1911 edition of Robert Louis Stevenson’s ‘Treasure Island.’ Image from the New Britain Museum of American Art, courtesy of Wikimedia Commons.

CHADDS FORD, Pa. (AP) – A century after N.C. Wyeth’s illustrations of the pirates and scalawags of Treasure Island first appeared, the iconic images considered the definitive version of the classic tale are reunited for the first time since their completion.

The Brandywine Museum has reassembled them in a new exhibit marking the 100th anniversary of Wyeth’s Treasure Island and the 40th anniversary of the museum, not far from an old carriage house where Wyeth created the 17 large oils on canvas for publishing house Charles Scribner’s Sons. The only painting not in the exhibit was destroyed in a fire in 1952.

Scribner’s displayed the paintings in their New York bookstore and sold several, but the bulk of the paintings are owned either by the museum or the Wyeth family. The New York Public Library owns two, one is in private hands and one is owned by the New Britain Museum of American Art in Connecticut.

“From his correspondence, we found that these paintings were done in about 3 1/2 months, which is an incredibly rapid pace,” curator Christine Podmaniczky said. “He didn’t make drawings of everything first, worked spontaneously right on the canvas.”

Robert Louis Stevenson’s 1883 book was already a favorite of readers and critics when the story was published with Wyeth’s illustrations in 1911. Where earlier editions typically featured basic line drawings to illustrate the coming-of-age adventure, Wyeth’s spirited and colorful depictions of Long John Silver, Jim Hawkins, Billy Bones and company became an instant hit.

The first print run of about 10,000 copies quickly sold out. The book’s success marked the start of a long relationship between Wyeth and Scribner’s that led to a popular series of Wyeth-illustrated children’s classics.

Scribner’s paid $2,500 for Treasure Island, which Wyeth used to buy 18 picturesque acres along the Brandywine River Valley. There he built a home and studio where generations of Wyeths began their art training including his son, famed realist Andrew Wyeth, and grandson, contemporary painter Jamie Wyeth.

N.C. Wyeth was at the height of his artistic powers with Treasure Island, which used neighbors and acquaintances as models for the striking 3- by 4-foot works—unusually large considering they were being reduced to around 6 inches tall. Wyeth made the works based not on characters but passages he thought would visually translate, Podmaniczky said.

“It’s not so much the facial features he was concerned with, but creating a sense of energy and motion,” she said. “He was also a master colorist and he could do wonderful things with light and shadow.”

The exhibition also presents some Treasure Island productions created by the illustrators, theater and film directors and even digital application designers who used Wyeth’s work as references.

A 1916 silent movie of Treasure Island modeled its costumes and character types after Wyeth’s work and actor Lionel Barrymore said in a newspaper interview that his portrayal of Billy Bones was inspired by Wyeth’s archetype. Visitors to the exhibit can also see how Disney animators interpreted Wyeth’s style for 1950’s Treasure Island as well as the futuristic Treasure Planet from 2002.

“No director had a finer production illustrator than N.C. Wyeth,” director Fraser Heston says in a letter included in the exhibit. The son of Charlton Heston, he based his Treasure Island storyboards on Wyeth’s work for a 1989 movie starring his father as peg-legged pirate Long John Silver.

The exhibit is on view until Nov. 20.