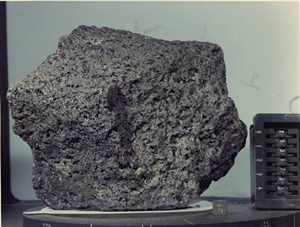 This lunar rock from the Apollo 17 mission, known as Sample 70017 or the "Goodwill Rock," was cut up into hundreds of pieces and distributed to all 50 states and more than 130 nations. Colorado’s tiny piece of the rock ended up on a plaque hanging on the wall of the state’s ex-Governor. It is now moving to the Colorado School of Mines. NASA Photo.

GOLDEN, Colo. (AP) – Colorado’s once missing moon rock is about to go on public display.

Gov. Bill Ritter and Colorado School of Mines president Bill Scoggins will unveil the rock Wednesday at the school in Golden, its new home.

The Nixon administration gave former Colorado Gov. John Vanderhoof the rock in 1974. It was a piece of moon rubble from the Apollo 17 mission and all 50 states and more than 130 foreign countries received samples.

Many have turned up missing and some student researchers have been trying to track them down. In June, Vanderhoof was questioned by a reporter and said he had the missing rock.

Vanderhoof said he didn’t think anyone else was interested and offered to give the rock to a museum.

It will be on display starting Monday.

Hoosiers get opportunity to touch a moon rock

More than 1,500 apply to live in Chicago museum