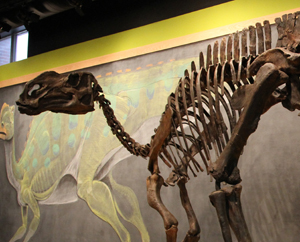 Reconstruction of a Hadrosaurus foulkii at the Academy of Natural Sciences of Drexel University, Philadelphia. Image by Jim the Photographer of Springfield, Pennsylvania; licensed under the Creative Commons Attribution 2.0 Generic license.

BISMARCK, N.D. (AP) – A fundraising effort has begun to keep an extremely rare fossil found in North Dakota at the North Dakota Heritage Center in Bismarck, where it was restored and is being exhibited.

John Hoganson, state paleontologist with the North Dakota Geological Survey in Bismarck, said the duck-billed dinosaur or hadrosaur called “Dakota” is an extremely rare fossil. He said the fossil is rare because it is nearly a complete skeleton and also because much of the carcass has skin preserved.

“There has been only about six duck-billed dinosaurs that have been found that have been mummified in this manner,” Hoganson told the Minot Daily News.

Tyler Lyson, from Marmarth, discovered the fossil and is its owner, Hoganson said. He said Lyson has finished his doctoral studies in paleontology at Yale University and now has a post doctorate position at the Smithsonian Institution in Washington, D.C.

Lyson found the fossil in 1999 on his uncle’s ranch near Marmarth in southwest North Dakota.

The work on the fossil was done over five years in Bismarck.

“The arrangement that we have with Tyler regarding Dakota is that we will prepare the fossil here in the North Dakota Geological Survey Paleontology Laboratory at the Heritage Center. In exchange we have Dakota until July 2015,” Hoganson said.

Duck-billed dinosaurs lived in North Dakota about 65 million years ago during the Cretaceous Period, Hoganson said.

“Dakota was about 25 feet long and weighed about 3 tons in life. These animals were abundant and probably lived in herds,” he said.

A crocodile is fossilized with Dakota.

“Duck-billed dinosaurs were herbivores and did not eat meat so the crocodile was not prey of this animal. I suspect that the crocodile just ended up being fossilized with Dakota,” Hoganson said. The fossilized crocodile includes its “hand” and part of the arm.

Dakota has been at the Heritage Center for several years, with the exception of a short time when the fossil was exhibited in Japan at the Dinosaur Expo 2009, an international expo.

The entire specimen arm, tail and body block were sent to Japan for the expo, with the exception of a few small pieces that were being restored at the time at the Heritage Center. It was the first time dinosaur specimens from the Dakotas were shown in Japan. Hoganson and Lyson also went to Japan in July 2009 for setting up Dakota and also for the ribbon cutting and grand opening of the dinosaur expo. After three months of being on exhibit in Japan, Dakota was shipped back to the North Dakota Heritage Center.

Lyson decided to send the fossil to the expo in Japan because he thought it would be good for it to get international exposure, Hoganson said.

The fundraising effort is being done to raise money so Dakota can stay in North Dakota at the Heritage Center.

“Tyler, and all of us, would like to see Dakota remain in North Dakota and the Heritage Center permanently. In order for this to happen we have begun a fundraising effort to keep the fossil here,” Hoganson said.

The money raised will go to Lyson, the owner and finder of Dakota, for continued collection and research of fossils in the Marmarth area through his foundation called the Marmarth Research Foundation.

Hoganson said officials have not yet specified an amount of money that must be raised.

“But it is a lot because of its value and other major museums outside of North Dakota and globally have shown interest in having it. We hope that we will be able to get corporate and other sponsors to keep this rare iconic fossil in North Dakota,” he said. 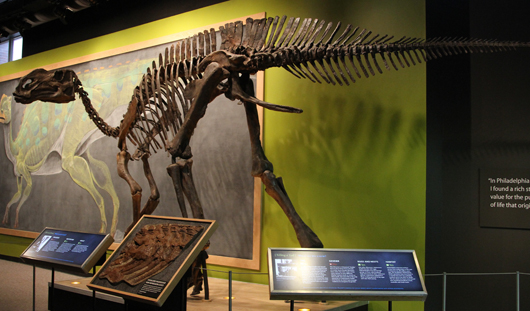 Reconstruction of a Hadrosaurus foulkii at the Academy of Natural Sciences of Drexel University, Philadelphia. Image by Jim the Photographer of Springfield, Pennsylvania; licensed under the Creative Commons Attribution 2.0 Generic license.