Cast of the remains of ‘Lucy’ from Musee National d’Histoire Naturelle, Paris. Licensed under the GNU Free Documentation License.

WASHINGTON (AP) – A team of researchers who got a first look at a foot bone from famous fossil Lucy who lived 3 million or more years ago, and concluded this ancestor was fully comfortable with life on the ground, rather than in the trees.

Carol Ward of the University of Missouri, and colleagues, report in Friday’s edition of the journal Science that the discovery shows that ancient Australopithecus afarensis had feet similar to modern humans.

Lucy is the poster girl for her group of ancient hominins. The study of her other bones showed she was able to stand upright. But no foot bones were found with her skeleton, so researchers have puzzled over whether she walked like modern people or was a blend of ground- and tree-dweller.

The new discovery shows these relatives “were fully humanlike and committed to life on the ground,” Ward said in a telephone interview from Africa. “It lays to rest the idea that they were a compromise.”

The new bone, discovered with other A. afarensis bones at Hadar, Ethiopia, is a metatarsal, one of the long bones connecting the toes to the base of the foot.

It shows that Lucy’s kin had arches stiffening their feet like modern people, as opposed to apes whose feet are more flexible for grasping tree branches.

This was an important step in evolution, Ward explained. “This shows our early ancestor walked like we would walk. They were not shuffling, they were walking upright, which is a key feature of our branch of the family tree.

“Now that we know Lucy and her relatives had arches in their feet, this affects much of what we know about them, from where they lived to what they ate and how they avoided predators,” said Ward, a professor of integrative anatomy.

“The development of arched feet was a fundamental shift toward the human condition, because it meant giving up the ability to use the big toe for grasping branches, signaling that our ancestors had finally abandoned life in the trees in favor of life on the ground.”

Richard Potts, director of the human origins program at the Smithsonian’s National Museum of Natural History, called the report “an impressive paper for just one bone.”

“Every once in a while you do get one piece of the puzzle that helps you fill in something. This bone really fills in a missing piece,” said Potts, who was not part of the research team.

“Where this article is a game-changer, to me, is that it correctly notes that there has been this discussion about whether Lucy’s species had compromised two-legged walking. This shows that it wasn’t compromised walking,” said Potts.

That doesn’t mean A. afarensis did not climb trees, he added. It was probably a very adaptable creature, using trees when they were available but being quite comfortable on the ground.

A. afarensis still retained the well-muscled arms that would have been useful in trees, Potts noted.

Meanwhile, the Smithsonian museum was welcoming artifacts of Australopithecus sediba, another human ancestor who lived in Africa about 2 million years ago, a million years after Lucy and her relatives.

The previously unknown A. sediba was first reported last year, and casts of those skeletons arrived at the museum Thursday, donated by the University of Witwatersrand in South Africa.

The arrival means that researchers will be able to study the casts at the Smithsonian, and they will also be on display to the public, Potts said, 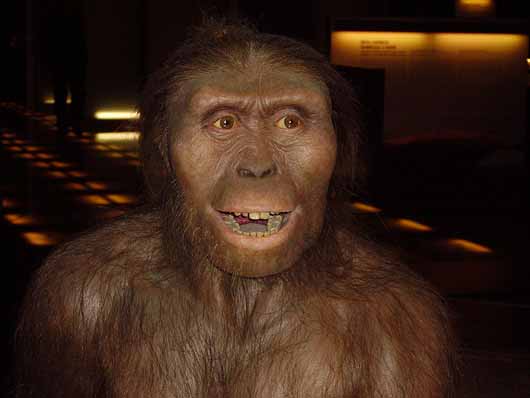 Cast of the remains of ‘Lucy’ from Musee National d’Histoire Naturelle, Paris. Licensed under the GNU Free Documentation License.

Reconstruction of a female Australopithecus afarensis.