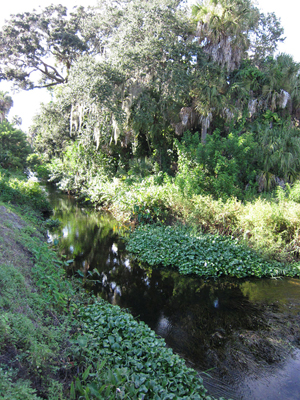 Fossil deposits from the Melbourne Bone Bed were discovered in a tributary of Crane Creek, similar to the one shown here. Image by Leonard J. DeFrancisci. This file is licensed under the Creative Commons Attribution-ShareAlike 3.0 Unported license.

MELBOURNE, Fla. (AP) – Bob Gross’ fascination with archaeology here—from shell middens to skulls studied by the Smithsonian—started when he was 9 years old and playing Parcheesi with a neighbor lady in exchange for Kool-Aid and cookies.

Frances Arnold-Shave, the neighbor, told him about living in a cabin on a Native American mound near Malabar.

“You tell that to a 9-year-old boy, and, ‘Where? Where?’” Gross recalled his response in 1957. The next day, he pedaled his bike down the two-lane U.S. 1 to the mound. He found two artifacts: a pottery shard and wrought-iron hinge.

“I was hooked,” he said. He soon learned of the area’s history: Mammoth teeth and skeletons and arrowheads and human remains found here that might date back to the Ice Age more than 13,000 years ago.

Development of south Brevard in the 1920s helped unearth that history, and drew the attention of scholars and researchers at the Smithsonian Institution and Amherst College.

As businessmen began clearing land to plant orange groves and drainage systems were being dug, workers began discovering fossilized animal bones. Scientists identified them as skeletons of mastodons and mammoths, camels, giant sloths and armadillos and horses. A soil layer containing the bones stretches intermittently between present day Florida Institute of Technology and Vero Beach. It is known to archaeologists as the “Melbourne bone beds.”

One skull and fragments of arm and leg bones, found in the early 1920s near the bones of a mastodon, prompted a 30-year debate between geologists and archaeologists as to whether Native Americans lived alongside large mammals. That fact has since been proven by other archaeological discoveries, Gross said.

The skull, known as “Melbourne Man,” was found along Crane Creek at the Melbourne Country Club, now the Crane Creek Reserve Golf Course. The municipal course on U.S. 192 was recently highlighted for its historic character.

The skull, and another found near Vero Beach, were at the time thought to be the oldest human remains found in North America and their discoveries drew worldwide attention. The “Melbourne man” skull is now part of the Smithsonian’s collection.

Even today scholarly publications vary when recording the age of such discoveries, though they are generally estimated to be between 10,000 and 20,000 years old.

Gross said the flowing water of Crane Creek likely shifted some artifacts and made identifying their antiquity difficult.

“You could find a beer can next to a mammoth bone,” Gross said. “The fact that they found 90 percent, or 85 percent of that mammoth, only happened I think because it was submerged in an old oxbow of the creek.”

The nearly complete mammoth skeleton was found about the same time as the skull on what is now Florida Tech’s campus. It has been reconstructed and greets visitors to the Beneski Museum of Natural History at Amherst College in Massachusetts.

Those bones were found about 40 years before a 13-year-old Gross found a mammoth tooth near a palm tree on the course’s north edge, he said.

Gross graduated from Melbourne High and went on to study archaeology at University of Florida. He graduated in 1973 and couldn’t find work in his field, so he got a job at Harris Corp. Though archaeology didn’t pay the bills, Gross kept up with the hobby. He has served as chairman of the Brevard Historical Commission and South Brevard Historical Society and president of the Indian River chapter of the Florida Anthropological Society.

Gross believes the people putting on the greens at the Melbourne course are doing so atop more animal and human relics. Thankfully, he said, it’s all on protected land. And, mostly, people are not aware of the area’s prehistoric story.

Artie Ulmer moved to Melbourne in 1957 and picked up a club at Crane Creek Reserve a year or two later, about the same time Gross began his discoveries at the site.

Ulmer, now 93, played on the course before the original wooden clubhouse was razed and rebuilt. He golfs there at least twice each week and volunteers with jobs like cleaning carts. He did not know about the area’s more distant past.

“I’ll be darned,” he said when told of the prehistoric discoveries. “I gotta look out where I’m playing now.”

Gross will continue to look.

“To this day anytime I see dirt dug up, I gotta look,” he said. 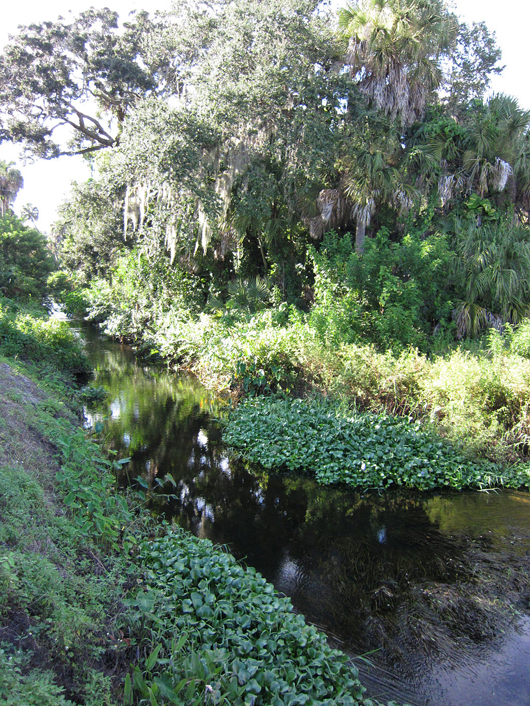 Fossil deposits from the Melbourne Bone Bed were discovered in a tributary of Crane Creek, similar to the one shown here. Image by Leonard J. DeFrancisci. This file is licensed under the Creative Commons Attribution-ShareAlike 3.0 Unported license.

Late Catawba potter remembered for the small things he did