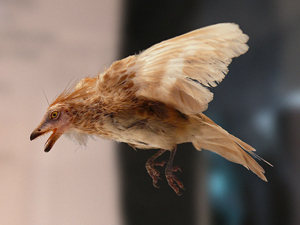 A reconstruction of the iberomesornis (of the extinct Enanthiornithes family) housed in the Museo Nacional de Ciencias Naturales in Madrid, 2007 photo by José-Manuel Benito Álvarez.

FORT WORTH, Texas (AP) – Amateur paleontologist Kris Howe, 34, was just doing what he learned as a 5-year-old from his father, a fossil collector. But his recent discovery is being hailed as one of the most significant in years.

On a fossil hunt near the dam spillway at Lake Grapevine, Howe happened upon four bones that two Dallas scientists say are the oldest bird fossils found in North America.

“My first thought was, ‘Wow, that’s pretty cool looking. I wish I knew what it was,”’ Howe said of spotting the arrangement of fossils poking out from the ground, each “within centimeters” of the others.

“It was an excitement that started with (Howe) and cascaded from there,” said scientist Tony Fiorillo, curator of earth sciences for the Dallas Museum of Nature and Science.

The fossilized bones are about 96 million years old and from a previously undiscovered species of flightless, carnivorous bird that probably resembled a modern roadrunner, museum paleontologist Ron Tykoski said at a news conference earlier this month to announce the discovery.

The largest fossil, a shoulder blade, measured about 2.5 inches. Fused metacarpals, or hand bones, suggested the bird had claws, and therefore teeth, to feed on other creatures in this region, a coastal area in that time.

A section of lower leg bone was also found. Another bone could not be positively identified because of its poor condition, but the scientists speculate it could be a part of the bird’s upper wing.

Together, the fossils are “reminiscent of what you might find in the bottom of a KFC bucket,” Fiorillo said. But they help close a gap in the evolutionary timeline of prehistoric birds, Tykoski said.

Howe’s discovery “extends the North American record of Enantiornithes back by approximately 10 million years,” the scientists said in an academic article published in the current issue of the Journal of Vertebrate Paleontology.

Fiorillo said the discovery is a “best-case scenario.” Because of his experience collecting fossils, Howe, of Carrollton, was able to spot the bones and enlist Fiorillo and Tykoski’s help in identifying them before erosion washed them away. To the untrained eye, Howe said, each fossil would have looked “like just a lump of rock.”

The fossils are the latest in a series of finds near the lake.

In 2006, fossils from a Columbian mammoth, including a jawbone and parts of a tusk, were found along the receding shores of the lake.

In 2005, fossilized dinosaur tracks in sandstone bedrock, first found in 1989, were rediscovered when lake levels dropped. But shortly after word of the discovery became public, someone stole two of the footprints, estimated to be 96 million years old, and damaged another print. In response, the Army Corps of Engineers filled the prints with clay, dirt and rocks so they wouldn’t be visible.

Other fossils have also been discovered around the lake, including tracks from a meat-eating dinosaur and a smaller, birdlike dinosaur found in 1982.

Sevres Porcelain: the yes, the no and the maybe
Scroll to top