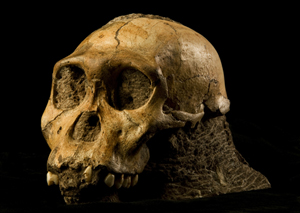 The cranium of Malapa hominid 1 (MH1) from South Africa, named ‘Karabo.’ The combined fossilized remains of this juvenile male are designated as the holotype for Australopithecus sediba. Photo taken in March 2010 by Brett Eloff. Courtesy Profberger and Wits University, licensed under the Creative Commons Attribution-Share Alike 3.0 Unported, 2.5 Generic, 2.0 Generic and 1.0 Generic license.

JOHANNESBURG (AP) – Archaeologists will stream live footage online as they recover significant parts of an early human skeleton that’s nearly two million years old, the first time the public can participate in the discovery process from their homes, a South African scientist said.

Paleontologist Lee Berger told The Associated Press it was valuable to bring the research to the public.

“It’s important for people to understand where they come from,” Berger said. “This belongs to the people, this is the story of humanity.”

The rock containing the fossil material that will be extracted was found in 2009, but lay in a laboratory at Berger’s University of Witwatersrand in Johannesburg until earlier in June this year. A CT scan revealed what might be highly intact remains of Karabo, a young specimen of Australopithecus sediba.

The first parts of Karabo were found in 2008 and are in fact one of the most complete early human skeletons ever discovered. Berger came across the find by accident when his then nine-year-old son Matthew discovered the first piece of Karabo’s remains. After the bones were discovered, the children of South Africa were invited to name the child, which they called Karabo, meaning “answer” in the local Tswana language.

The CT scan of the rock last month showed critical body parts fossilized in it such as a jaw, a complete thigh bone and ribs among others. A DNA test of the find’s outer layer matched that of Karabo, which Berger said might mean they belong to the already highly intact skeleton.

“This discovery will almost certainly make Karabo the most complete early human ancestor skeleton ever discovered,” Berger said in a press release.

A state-of-the-art interactive laboratory will be built by the University of Witwatersrand and the South African government with cameras streaming video footage in real time, he said. The public will be able to listen in on the discovery process and also post questions to scientists via Twitter. The lab using CT scanning will be the first of its kind and is groundbreaking in paleontology.

Berger said they set up the live-project because public interest in archaeological finds has become overwhelming since the discovery of fossil-rich sites in South Africa’s Cradle of Humankind. With several cameras monitoring the process, viewers will be able to get a glimpse into every aspect of the lab work and will be able to switch between camera angles, including microscopic images.

“We have to invent the science as we go, no one else has done this before in history,” Berger said.

The Shanghai Science and Technology Museum will be the first of three virtual outposts connected to the laboratory in South Africa, and visitors there will be able to manipulate cameras remotely.

Berger said he hopes the interactive laboratory will be up and running by November. Viewers will be able to follow along the construction, according to Berger, the cameras will be installed as soon as they begin building the lab.

Berger will make the official announcement for the project in China on Friday.

The Cradle of Humankind, a World Heritage site in South Africa, is one of the world’s richest fossil-bearing locations. 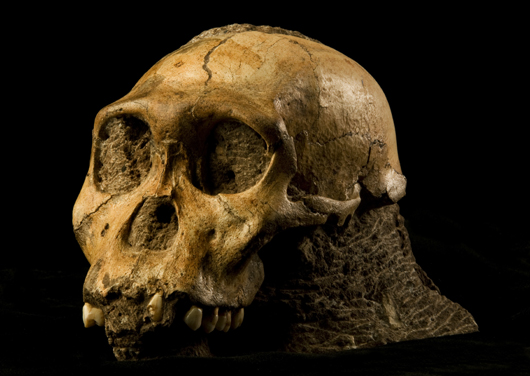 The cranium of Malapa hominid 1 (MH1) from South Africa, named ‘Karabo.’ The combined fossilized remains of this juvenile male are designated as the holotype for Australopithecus sediba. Photo taken in March 2010 by Brett Eloff. Courtesy Profberger and Wits University, licensed under the Creative Commons Attribution-Share Alike 3.0 Unported, 2.5 Generic, 2.0 Generic and 1.0 Generic license.