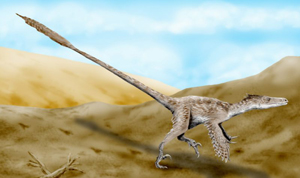 WASHINGTON (AP) – Around 70 million years ago a stocky dragon stalked what is now Romania.

A new type of dinosaur similar to the frightening Velociraptor – but with two sharp claws on each foot instead of just one – has been discovered by Romanian and American researchers.

“Balaur bondoc,” which means “stocky dragon,” was discovered in Romania by geologist Matyas Vremir of the Transylvanian Museum Society. The find is reported in Tuesday’s edition of Proceedings of the National Academy of Science.

“Balaur might be one of the largest predators in this ecosystem,” explained co-author Zoltan Csiki of the University of Bucharest, who noted that higher sea level at the time made the region an island archipelago.

Csiki said that while Balaur is extremely unusual, it is closely related to animals like Velociraptor and the feathered dinosaurs in China.

The researchers said the fossils show an animal 6 to 7 feet long with a stockier build than similarly sized Velociraptors that lived elsewhere on the globe. There are numerous similarities between the two predators, though.

“While we would expect that there were carnivorous animals in these faunas, finding one as unusual as Balaur is thrilling,” said co-author Mark Norell of the American Museum of Natural History in New York.

Matthew T. Carrano, curator of dinosauria at the Smithsonian’s National Museum of Natural History in Washington, said the discovery is “one of those bizarre things that keeps reminding us not to expect that we’ve found everything there is to find.” Carrano was not part of the research team.

In the same region researchers have also uncovered fossils of tiny duckbilled dinosaurs and dwarf plant-eating dinosaurs that were the size of cows.

It had a big toe with a large claw that can be hyperextended, presumably used to slash prey, as well as a large claw on the second toe. It had short and stocky feet and legs, with bones fused together, and the pelvis has enormous muscle attachment areas, indicating that it was adapted for strength rather than speed.

In addition, the hand is atrophied and some of the bones are fused, features that would have made grasping difficult.

Stephen Brusatte, a graduate student at Columbia University who is affiliated with the American Museum of Natural History, said: “Compared to Velociraptor, Balaur was probably more of a kickboxer than a sprinter, and it might have been able to take down larger animals than itself, as many carnivores do today.”

Norell said it is hard to tell how it hunted or what it ate.

But he noted that Balaur had very strong pelvic muscles could have helped it use a great deal of force. It was a small, stocky, very strong animal.

The research was funded by the Romanian National University Research Council, American Museum of Natural History and the U.S. National Science Foundation.

Researchers may have found King Alfred the Great’s remains

Cowan’s Corner: Inside track for Outsider Art
Scroll to top