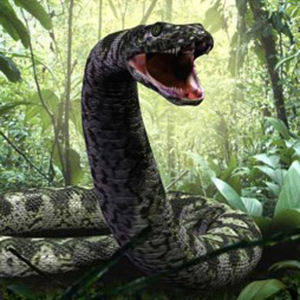 Image of Titanoboa replica courtesy of The Smithsonian Institution.

WASHINGTON (AP) – A prehistoric monster snake the length of a school bus that likely fed on supersize turtles and crocodiles has made its way to the Smithsonian Institution for an exhibit opening Friday.

The National Museum of Natural History is featuring a life-size replica of Titanoboa along with a cast of its large vertebra through January 2013. When it was alive, the snake averaged 48 feet long.

Fossils from the world’s largest snake were first discovered in 2004 in a coal mine in Colombia that once was a rainforest. Eventually bones from at least 60 of the monster snakes were uncovered.

At first scientists labeled the fossils as being vertebra from a crocodile, but a graduate student noticed there was a difference. A student interning with the Smithsonian eventually discovered the snake’s skull. The specimen broke the previous record for snake length by 11 feet.

“It tells you how magical nature is,” said Carlos Jaramillo, a staff scientist at the Smithsonian’s Tropical Research Institute, who helped make the discovery. “Here we have it, so nature can do many things.”

Scientists figure the snake weighed about 2,500 pounds. It was found near fossilized plants, giant turtles the size of a kitchen table and other creatures dating to more than 60 million years ago in the Paleocene era after the dinosaurs.

Titanoboa was related to modern boa constrictors and anacondas. Scientists say it was the world’s largest predator and large enough to eat a cow or a human easily. It likely fed on large turtles or crocodiles while spending most of its time in water.

One meal could last it an entire year because of its long digestive process.

After the fossils were uncovered, it took a year to determine the snake’s full length. Jason Head, a professor from the University of Nebraska-Lincoln, developed a mathematical model to calculate the massive size.

Until the discovery in the coal mine, there were few opportunities to find signs of the prehistoric life of tropical rainforests because thick vegetation blocked any archaeological expedition, said Jonathan Bloch, a paleontologist at the Florida Museum of Natural History at the University of Florida in Gainesville where scientists continue to study the full set of fossils.

“The tropics have been this closed window for so long,” he said. “We had really essentially no idea what the animals look like in what should be an incredibly diverse region.”

Scientists also developed a method to estimate the temperature of the climate that produced such a beast. They estimate the rainforest at that time was several degrees warmer than it is now, helping to grow much larger creatures. Their findings were first reported in 2009 in the journal Nature.

On Sunday, the Smithsonian Channel will debut a new documentary about the discovery, “Titanoboa: Monster Snake.”

After the Smithsonian display, the exhibit will move to the Florida Museum of Natural History, the University of Nebraska and the BioMuseuo in Panama. 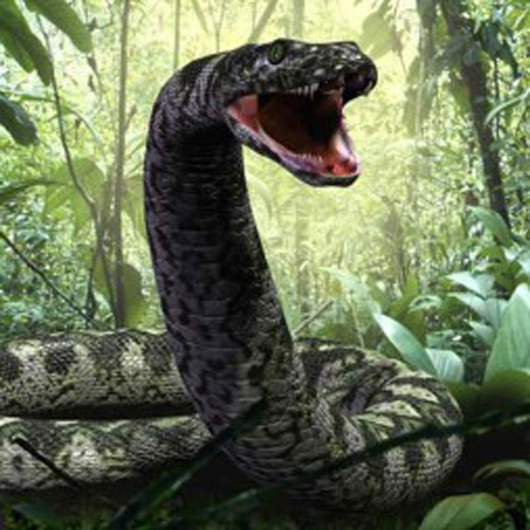 Image of Titanoboa replica courtesy of The Smithsonian Institution.