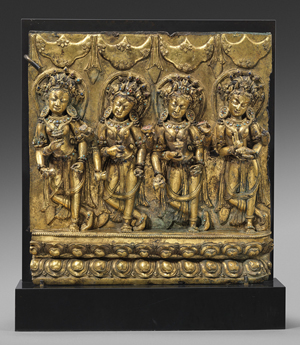 From the minute the 47 international galleries of Asia Week New York opened their doors on March 14, a whirlwind of activities invigorated the city. The annual event was celebrated with a magnificent reception at the Metropolitan Museum of Art on March 17, where U.N. Secretary General Ban Ki-moon welcomed more than 600 collectors, curators and Asian art specialists. The event ignited excitement that burned for the entire week, and the Asian art world buzzed with exhibitions and record-breaking auctions that were thronged with international buyers from mainland China, Taiwan, India, Japan, Korea and the United States.

“With an increase in overseas Chinese buyers, combined with many American museum curators and their patrons, Asia Week New York was a tremendous success this year,” said Carol Conover, chairman of Asia Week New York. “A record number of galleries – 47 – saw steady and heavy traffic throughout the week, and the four major auction houses saw sales reach new highs.”

Added Conover, who, in addition to her role as chair of Asia Week New York, is gallery director of Kaikodo LLC: “This was the best Asia Week my gallery has had since this initiative started six years ago. We saw many American clients we had not seen in the last few years, and of course, many more new Chinese buyers. There was great museum interest from institutions both in the U.S. and from abroad, and there was a definite increase in Chinese buyers.”

Accolades for Asia Week New York poured in from every quarter, as evidenced by the remarks of the participants:

Chinese specialist James Lally of J.J. Lally & Co. in New York said: “The results achieved during Asia Week were beyond satisfactory. I am glad to say that we had more collectors from China, Taiwan and Hong Kong participating this year than ever before, in every category and at every level.

“We did very well this week and had increased interest from museums,” said Nicholas Grindley, another purveyor of traditional Chinese works of art. He reported sales to major museums both in the U.S. and abroad, as well as to new Chinese buyers.

Conor Mahoney of the New York-based Chinese Porcelain Co. observed: “Due to the high quality of exhibitions, we noticed that Asia Week New York attracted a record number of Asian buyers.” Among the sales were Lotus Pod I & II, an ink drawing by Zhao Xu, 2013, and a rare Yue Yao stoneware lamp from the Western Jin Dynasty, A.D. 265–316.

Paris-based Christophe Hioco said, “We were pleased to meet so many visitors, both museum curators and American collectors, with a strong knowledge of Indian art.” He reported that 50 percent of his sales were to museums.

Also here from Paris was Antoine Barrère, who was delighted to see his regular clients as well as new people who expressed a great deal of interest. He also stated that he felt he developed more business contacts than ever before.

Marsha Vargas of the San Francisco-based Xanadu Gallery said that Asia Week New York was a good experience. “We sold a number of Tibetan ritual implements, including stupas and phurbas,” she said, adding that “Chinese buyers accounted for 95 percent of our sales.”

“We have had a very strong response to our exhibition this year and have had many more visitors in particular on the first day and the open-house weekend,” said Brendan Lynch of the London-based Oliver Forge & Brendan Lynch. “We’ve had visits from about 15 museum curators and directors. Sales were good, reflecting quality over quantity.” As well as their usual collection of Indian miniature paintings, Lynch reported that on opening day a private New York collector took home a highly important 15th-century gilt-bronze plaque from the Densatil Monastery in Tibet, depicting four offering goddesses, for a six-figure sum.

“It has been a very exciting week, with dozens of new faces coming into the gallery every day,” said Eric Zetterquist of his eponymous gallery. “More than half of my exhibition is sold, with strongest interest coming from American clients and institutions. Since I am one of the only venues with a significant collection of early Chinese ceramics, specialists of the field from all over the world came to see the exhibition.”

“We are very happy,” said Carlton Rochell of New York. He reported one of his best Asia Weeks ever with over $5 million in sales, almost 30 objects sold, and new purchasers, especially from mainland China.

This year, Asia Week New York welcomed a new partner: Presenting Sponsor Amanresorts, which spotlighted seven of its ne plus ultra resorts from four Asian countries, which include Amanfayun in Hangzhou, China, Aman at Summer Palace in Beijing, China, Amanbagh in Rajasthan, India, Aman-i-Khás in Ranthambore, India, Amangalla in Galle, Sri Lanka, Amanwella in Tangalle, Sri Lanka, and the Amankora in Bhutan.

Asia Week New York also continued its partnership with China Center New York, who returned for the second year as Supporting Sponsor. China Center is projected to open at One World Trade Center in early 2015, and will serve as a gateway for Chinese companies and individuals entering the U.S. to connect with American entities seeking new opportunities with China. 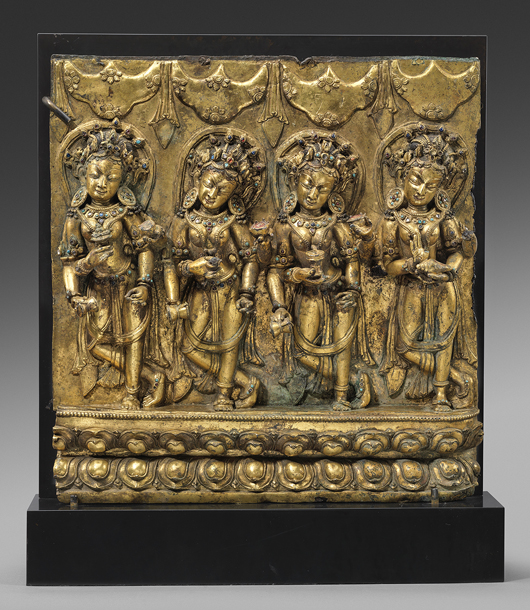 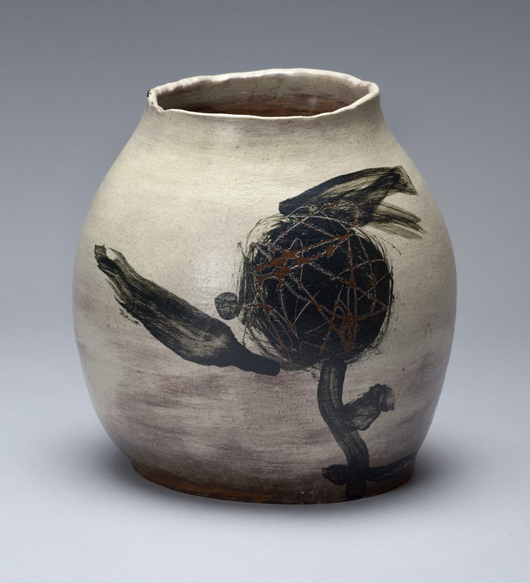