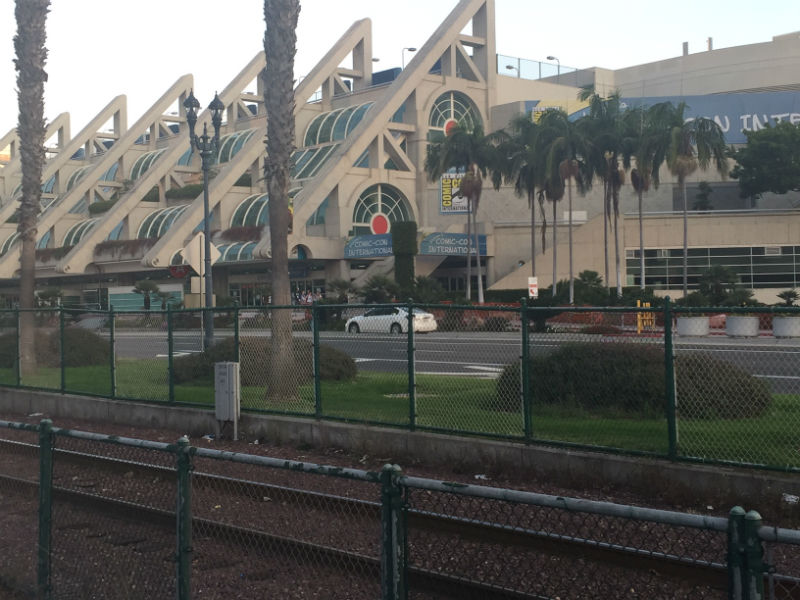 SAN DIEGO (ACNI) – Whether they’ve come to find accessible copies of rare comic books to fill in the holes in their collections, meet comic book creators, attend panels put on by the major studios, or to just attempt to, in some way, take it all, more than 125,000 fans ranging from the rabid to the merely curious are about to descend on the San Diego Convention Center for Comic-Con International: San Diego.

To indulge in a just a bit of hyperbole, it’s the mother of all Comic-Cons.

Beginning with Preview Night, which runs Wednesday, July 19, 2017 from approximately 5:30 p.m. (they say 5:30 in the programming literature, but almost always let people in a little early) until 9 p.m., the show will run through Sunday, July 23. Over that time, those 125,000+ fans will fill the entire convention center and more. 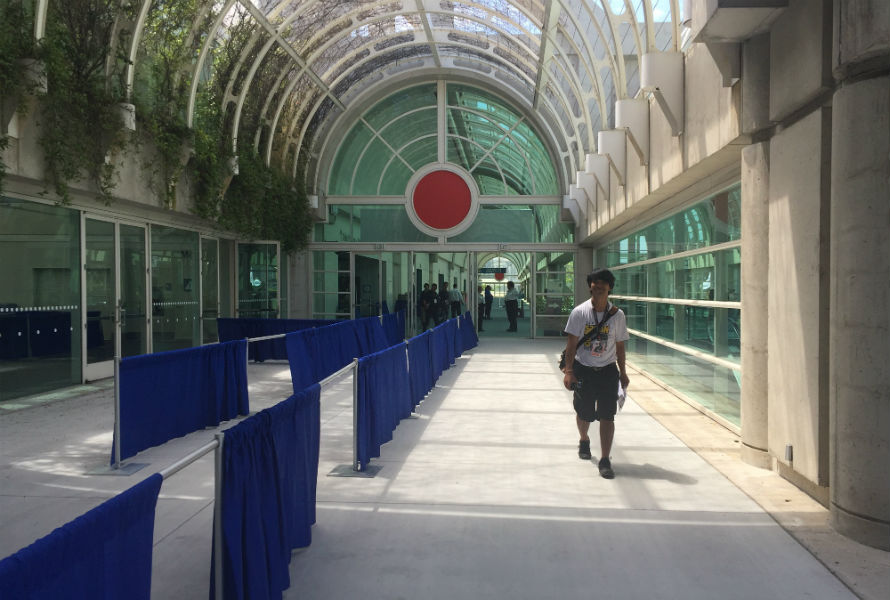 Registration lines Tuesday, July 18, were breezy. Wednesday is a different story as exhibitors, panel guests, and fans file into a somewhat organized but frequently chaotic environment filled with anticipation and many, many bodies. Photo by J. Kevin Topham

In recent years, in an effort to address the overcrowding of the convention center, activities have been farmed out to the adjacent Marriott Marquis and Hilton Bayfront hotels, as well as to other locations around town, including Petco Park, normally the home of the San Diego Padres. The result, along with an attendance cap, has kept it at or around 130,000, and the aisles have been more navigable than the overwhelming crush of just a few years ago.

Of course that’s just for the official activities for the 48th annual staging of the long-running show. Events from fan and creator gatherings to high-profile parties thrown by publishers, TV networks and movie studios dominate the city’s nightlife after convention hours.
For the bulk of fans, though, they’re not in this inviting city to chase the nighttime activities; they’re here for the long-running and largest comic book convention in North America. 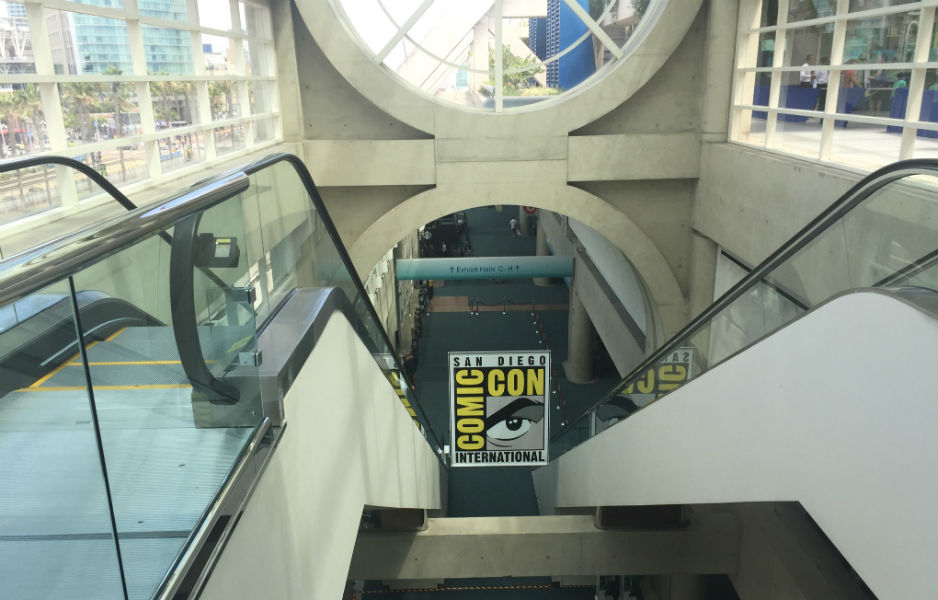 The familiar logo of Comic-Con International: San Diego appears not only all over the convention center, but also all around downtown San Diego. Photo by J. Kevin Topham

They’ve come to meet the show’s celebrated guests, to purchase comics, and seek out original comic art. They’ve come to engage with veteran comic scribe Beau Smith, creator of Wynonna Earp, just as they’ve come to see the cast and crew of the TV series Smith’s comic inspired on Syfy. They’ve come to meet acclaimed comic book writer and historian Paul Levitz, the former publisher and president of DC Comics. They’ve come to commiserate with fellow fans on this week’s passing of filmmaker George A. Romero, the father of the modern zombie genre. They’ve come to celebrate the 100th birthday of the late Jack Kirby, the largest influence on the world of Marvel Comics outside of Stan Lee.

Even with loading bays full of trucks arriving, dropping off cargo, and departing in an almost constant symphony of sound and action, Tuesday at Comic-Con is remarkably quiet. Fans cannot get in the halls as the exhibitors set up, but it is certainly possible to catch known vendors and buyers doing the occasional deal in hotel restaurants and bars and even on street corners all through the downtown area.

The morning before Preview Night, the level of activity picks up in noticeable ways, even though compared to what’s to come, it’s still very quiet. There’s more of a scramble heading into the hall with carts full of comic books, character statues and last-minute booth supplies for the movie studios. 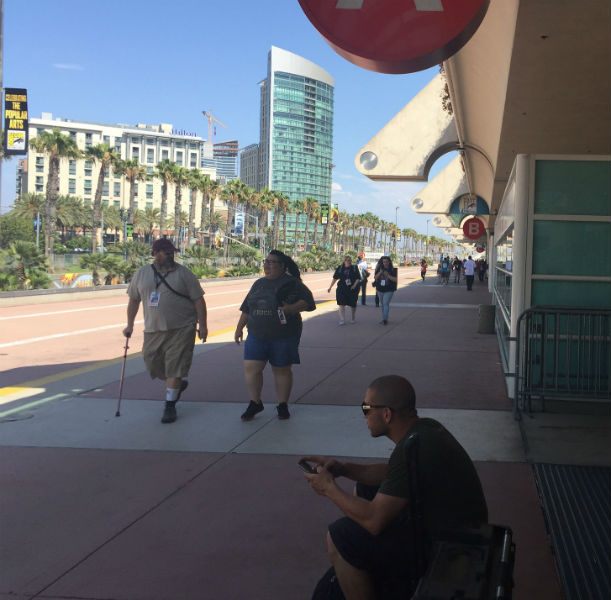 Before the doors open to the paying public at 5:30 p.m. PDT, the area in front of the convention center will be fully engorged with convention-goers headed in numerous directions. This photo shows the proverbial calm before the storm. Photo by J. Kevin Topham

The presence of media ad dollars is everywhere, from traditional billboards to wrapped local trains and buildings. The finishing touches are being added to the large outdoor displays for The Tick (returning as a new show on Amazon) and The Walking Dead (and spin-off Fear the Walking Dead) that occupy the landscape immediately across from the convention center.

The sensation of attending this convention for a first-time fan is truly – and most often happily – a staggering experience. A long look at the convention map shows that it’s just a lot to take in.

For experienced fans, the changes from the “old days” are equally a lot to digest. When the convention, which started in a local hotel, eventually moved to the then-new San Diego Convention Center, it didn’t even occupy the entire facility. In 1994 with 30,000 fans in attendance, for instance, when the building was less than half of its present size, there was another convention going on at the same time.

The changes have not come without negative side effects. One notable thorny issue is the place of comic books, comic book fans, comic book creators and comic book retailers in a convention that is after all known as Comic-Con. 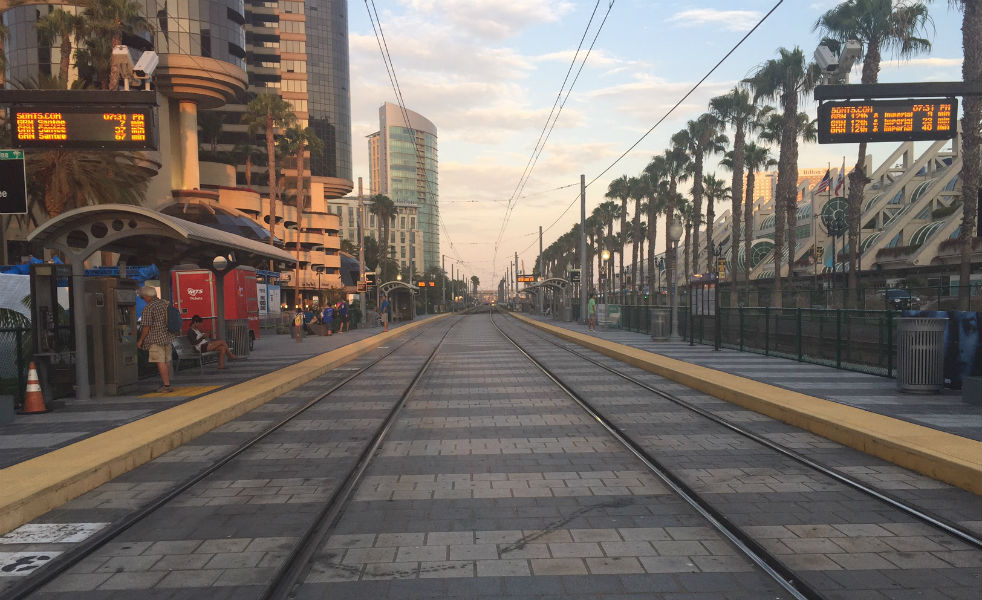 Immediately across Harbor Drive from the San Diego Convention Center, these light rail tracks and the sidewalks beside them, will be packed with attendees from before the start of the convention each day to the wee hours of the morning. This is the last time they’ll look like this until late Sunday night. Photo by J. Kevin Topham

While the major comic book auction houses – including Heritage Auctions, ComicConnect, ComicLink and Hake’s Americana & Collectibles – have strong presences at the show, the number of dealers has declined as the show has increasingly courted Hollywood dollars. Recently, Chuck Rozanski, owner of Mile High Comics, publicly announced that his company would not be setting up, ending a run of 44 years at the show.

“I wish that this decision could have been otherwise, but circumstances beyond our control made our further participation impossible. To explain, San Diego has grown far beyond its original premise, morphing from what was originally a wonderful annual gathering of the comics world, into a world-renown pop culture and media festival. As such, it has seen rapidly escalating costs, and also a dramatic change in the demographics of its attendees. Neither of those changes worked to our advantage,” Rozanski said in a statement posted on his company’s website, MileHighComics.com.

While he compared the $40 booth cost for their first booth at the show in 1973 and contrasted it with the most recent booth renewal fee of $18,000, and lamented a decrease in foot traffic, he suggested that it was the show management’s failure to even seem like they cared about his complaints that ended his long relationship with Comic-Con.

That said, business/politics didn’t stop the hotels from filling up Tuesday night and Wednesday morning. It didn’t stop the Amtrak from Los Angles from being sold out through the weekend. Whether it has any effect on the attendees after the fact remains to be seen.

For now, it’s just about time for Comic-Con to begin.
___

Watch for a follow-up report from on the floor at Comic-Con.

New reality: And the geek shall inherit the earth