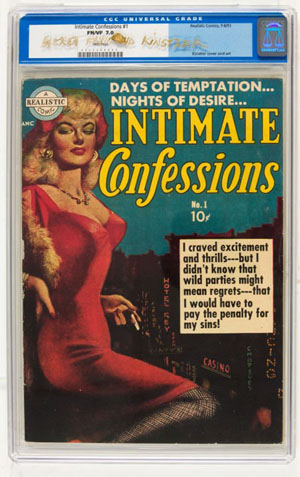 At the 2006 Comic Con illustrator Everett Raymond Kinstler signed the case holding a copy of his 1951 ‘Realistic Comics.’ Image courtesy of LiveAuctioneers Archive and Heritage Auctions.

LOS ANGELES (AP) – Perhaps the only ones more excited than the 130,000 fans getting ready for next week’s Comic-Con are the Hollywood studios and networks hoping to capture their attention.

Sony will showcase seven upcoming films at the four-day convention. Paramount is bringing Steven Spielberg to his first Comic-Con. Twentieth Century Fox is ballyhooing its film slate, including Rise of the Planet of the Apes. Universal is holding its world premiere of Cowboys & Aliens at Comic-Con.

Small-screen offerings include Showtime’s Dexter and Shameless, Fox’s Glee, Family Guy and The Simpsons, HBO’s True Blood and Game of Thrones,” and dozens of other popular shows distributed by ABC, NBC, MTV and Warner Bros. Television.

Then there are scores of video games, graphic novels and, yep, comic books that will make their debut or reconnect with their audiences at Comic-Con.

The Comic-Con crowd comprises the most passionate of fans, said Morgan Spurlock, who will unveil his book, Comic-Con Episode IV: A Fan’s Hope at the convention this year.

“What Comic-Con represents is the creme de la creme of all those people, of all those fans, of all those bloggers, of all those ticket buyers who are the most discerning of fans and who will scream from the mountaintops when they like something,” he said. “So if you’re a studio or you’re a publisher, whether it be of comics or video games, or you’re a producer of television programs and that’s your audience, you want to make sure that they get to see it. There’s no better champion of this type of material than the people who go to Comic-Con.”

It’s an educated group, too, said Jon Favreau, who introduced his last several movies at the convention, including the first and second Iron Man and his latest effort, Cowboys & Aliens. It was he who suggested bringing a Hollywood-style world premiere to the festival—a Comic-Con first.

“I owe so much to Comic-Con that it seemed like it would be a really fun and fitting end to the story to actually allow them to experience not just the first look at (the film) the year prior, but also let them be part of the premiere and see what that part of the equation is like,” he said. “What’s nice about Comic-Con—it’s people who give entertainment movies a lot of thought. They know their movies, so you’re presenting it to a refined set of tastes, but yet they also love popcorn movies. They’re not snobbish. … That’s a combination I aspire to.”

The Comic-Con crowd is connected online year round. When the cast of Twilight was first introduced at the convention in 2008, Twi-hards from across the country planned a pilgrimage to San Diego and slept overnight on the grass outside the convention center for a chance to be among the first to see the hunky vampires and werewolves in person.

“It was just incredible. I never saw the Beatles live, but that’s what I imagine it was like,” said Nancy Kirkpatrick, president of worldwide marketing for Summit Entertainment, distributor of the Twilight flicks. “It put Twilight on the map as far as a mainstream movie … But overall, you have those real hardcore pop-culture fans and media from around the world that can gauge what the response is from those fans, so it’s a great opportunity to set up a movie.”

Summit Entertainment will show footage from the penultimate installment in the Twilight franchise at this year’s festival.

Sony introduced District 9 at Comic-Con in 2009, before the film became a cult hit and an Oscar nominee.

“It got a huge, huge launch from there,” said Marc Weinstock, the studio’s president of worldwide marketing.

This year, Sony plans to show footage from the new Spider-Man movie, along with a peek at Total Recall, the new Ghost Rider, two animated properties and its forthcoming R-rated comedy, 30 Minutes or Less. Weinstock said the studio purposely delayed the release of the Ghost Rider trailer so it could make its debut at Comic-Con.

Though movies have a major presence at Comic-Con, it’s not a film festival.

“It’s more of like a marketing festival,” Weinstock said. “(Typically) you’re not showing the film. You’re showing scenes or clips or sizzle reels, so it’s more of almost just a trailer festival, like oh my god; I’m going to see stuff that no one else gets to see for months and months.”

Comic-Con success does not always lead to commercial success, but filmmakers and marketers say it’s worth the risk to bring properties straight to their eventual consumers.

“Does everything that gets momentum out of Comic-Con guarantee it’s going to be a mainstream hit? No, it doesn’t,” said Favreau. “But the right piece of material at that place, it will blast you into the stratosphere.”

AP Entertainment Writer Sandy Cohen can be reached at www.twitter.com/APSandy. 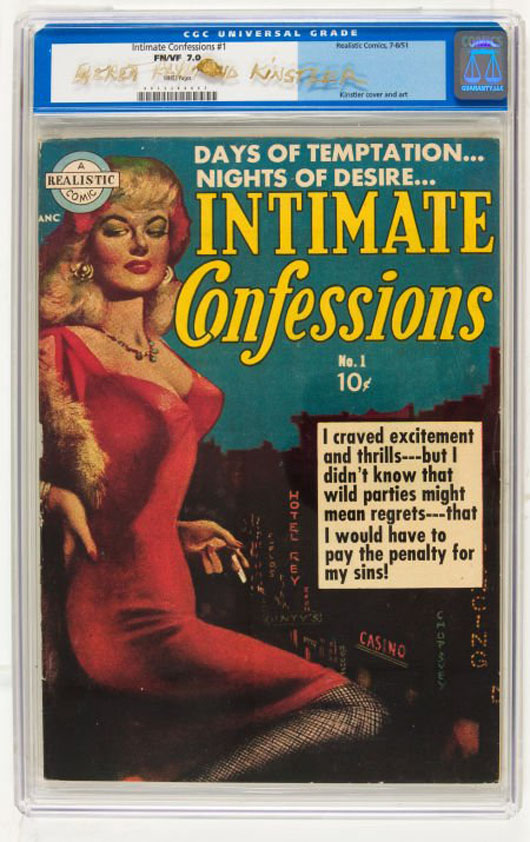 At the 2006 Comic Con illustrator Everett Raymond Kinstler signed the case holding a copy of his 1951 ‘Realistic Comics.’ Image courtesy of LiveAuctioneers Archive and Heritage Auctions.