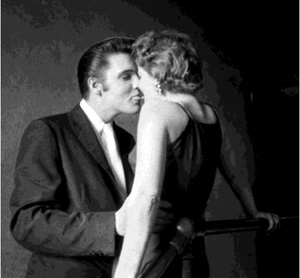 The Kiss, In the privacy of the narrow hallway under the fire stairs of the Mosque Theater (now the Landmark Theater), while other performers are on stage before 3000 fans in the audience, Elvis is concentrating on his date for the day. Mosque Theater, Richmond, Va. June 30, 1956. © Alfred Wertheimer. All rights reserved.

RICHMOND, Va. (AP) – A kiss is just a kiss — unless it’s Elvis Presley you’re kissing and you’re backstage at the old Richmond Mosque and a photographer transforms the moment into an iconic image.

Then, more than 55 years later, you sit at a table at the Virginia Museum of Fine Arts, sign autographs — lots and lots of photographs — and soak in the adulation of Elvis fans on what would have been Presley’s 77th birthday, as Barbara Gray did Jan. 7.

“We were just mobbed,” Gray said afterward. “It blew my mind.”

As Elvis music played, a line snaked through the museum’s atrium for more than two hours as people waited to meet Gray and have her sign books and pictures from the VMFA’s “Elvis at 21” exhibit. The books sold out. The four huge sheet cakes decorated with guitars in honor of Elvis’ birthday? “I went to Martin’s,” said museum marketing director Bob Tarren, “and asked for cake for 400.” It was gone in half an hour.

The 1956 picture by photographer Alfred Wertheimer of Presley “playfully romancing a blonde fan,” as Vanity Fair writer Alanna Nash put it, is well-known. Gray, not so much, until she came forward last year and Nash revealed her identity.

Gray, 75, a retired real estate manager from Charleston, S.C., said family and close friends have known for years that she was the “mystery blonde” and had urged her to go public.

Her fourth husband, Malcolm Gray, who accompanied her, finally persuaded her to let the world know.

In 1956, Gray was from Charleston, as she is now, and had spoken to Presley on the phone when he performed there. They agreed to meet two days later in Richmond, where Presley would be performing at the Mosque, now the Landmark Theater. (Gray actually has family in Richmond, including relatives who were resident caretakers of the property that has since become Lewis Ginter Botanical Garden.)

Presley sent a car to bring her to Richmond, where Wertheimer was chronicling Presley, then a rising star, and captured a number of photographs of the couple. Wertheimer never knew her name but identified her as Presley’s “date for the day.” After Richmond, Gray and Presley never met again.

At the museum, it was clear that since “The King,” as Presley was known, couldn’t make it — he died in 1977 — Gray was the next best thing.

“I’m so excited!” squealed Terri Arroyo of Charlottesville, wearing an Elvis T-shirt and Elvis wristwatch and carrying an Elvis pocketbook as she ran around the table to hug Gray and have her picture taken with her.

“I love Elvis,” Arroyo said a few minutes later, as she showed off the books and photographs she had Gray sign. “Oh, my gosh! I should have gotten her to sign my arm!”

J.D. Moore of Hopewell said he has been a “huge fan all my life” of Elvis and asked Gray to sign a copy of the famous photo that had been used for a CD of Presley music that Moore had purchased several years ago, not knowing, of course, he would one day meet the woman in it.

“Was that cool or what?” he said to a friend after posing for a picture with Gray

Linda Sadler of Richmond asked Gray to sign a book to her mother, Laura, who lives in Tennessee: “To one Elvis fan from another.”

“My mom and dad were big Elvis fans,” Sadler said. Her mother is 88.

Gray said she stepped into the spotlight only for recognition and her place in history. She hasn’t done it for the money. She sold a few prints made available to her by Wertheimer with proceeds going to a home for battered women managed by a granddaughter. Otherwise, she’s just doing this for the fun of it.

“It was so great for my heart to know that people didn’t just love Elvis, but they were really wanting to know who I was,” she said.

Told that she seemed to make a lot of people happy at the museum, Gray said, “and they made me happy. It’s very nice to be loved.” 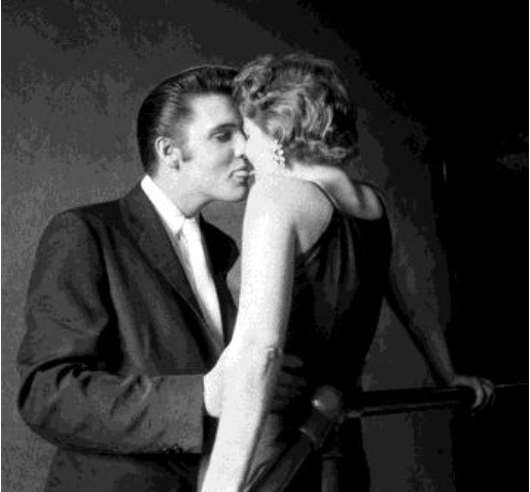 The Kiss, In the privacy of the narrow hallway under the fire stairs of the Mosque Theater (now the Landmark Theater), while other performers are on stage before 3000 fans in the audience, Elvis is concentrating on his date for the day. Mosque Theater, Richmond, Va. June 30, 1956. © Alfred Wertheimer. All rights reserved. 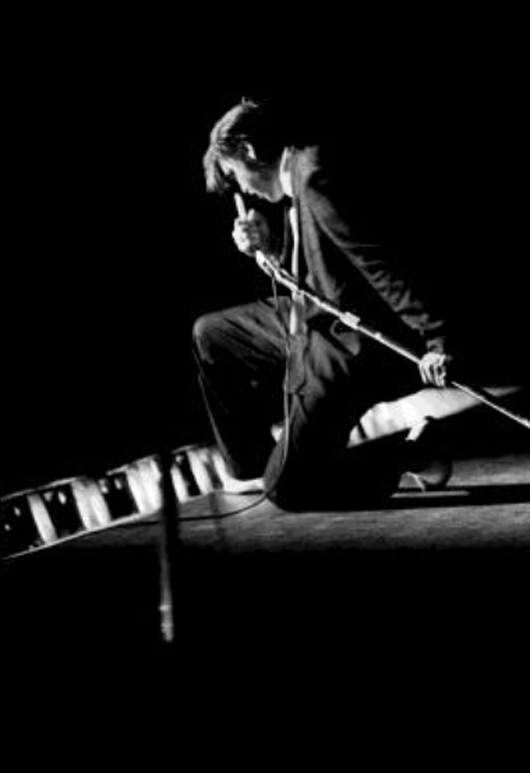 Kneeling at the Mosque, Elvis, on his knee in front of the foot lights, sings to his 3000 mostly teenage female fans, who were delighted by his presence and his music. He left them in tears of joy. Mosque Theater, Richmond, Va. June 30, 1956. © Alfred Wertheimer. All rights reserved. 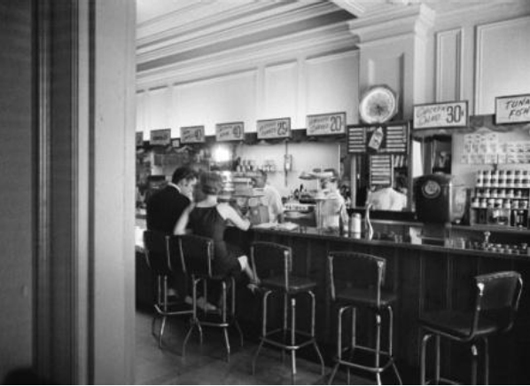 Grilled Cheese 20¢, With his date for the day, whom he met at the Jefferson Hotel, Elvis has a bowl of soup at the hotel coffee shop while showing her the script for The Steve Allen Show. Richmond, Va., June 30, 1956 © Alfred Wertheimer. All rights reserved. 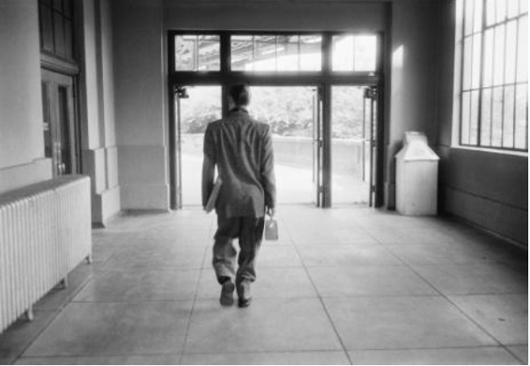 Leaving Richmond Train Station, After his TV performance, Elvis went to Richmond for two shows at the Mosque Theatre. Getting off the train, he turned on his RCA portable radio. Richmond, Va., June 30, 1956 © Alfred Wertheimer. All rights reserved. 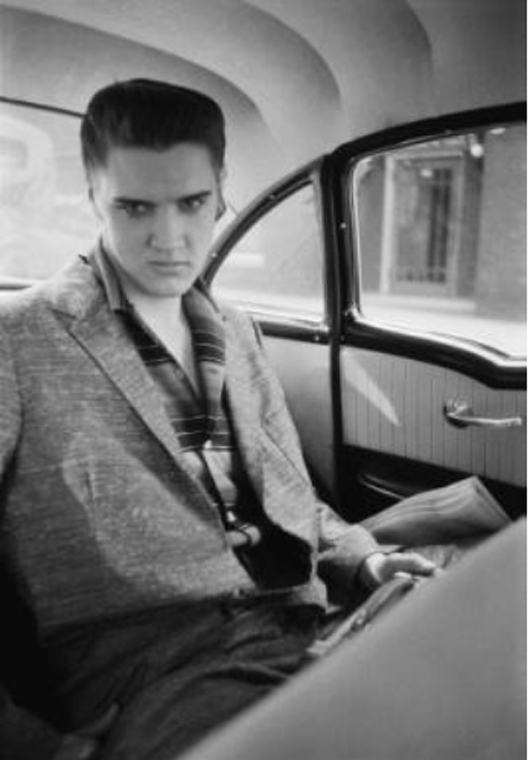 Inside Taxi, With his RCA portable transistor 7 radio blasting away in the back of a local cab from the train station, Elvis is about to leave for the Jefferson Hotel. He has two performances at the Mosque Theater (now the Landmark Theater) that afternoon and evening. Richmond, Va., June 30, 1956 © Alfred Wertheimer. All rights reserved.