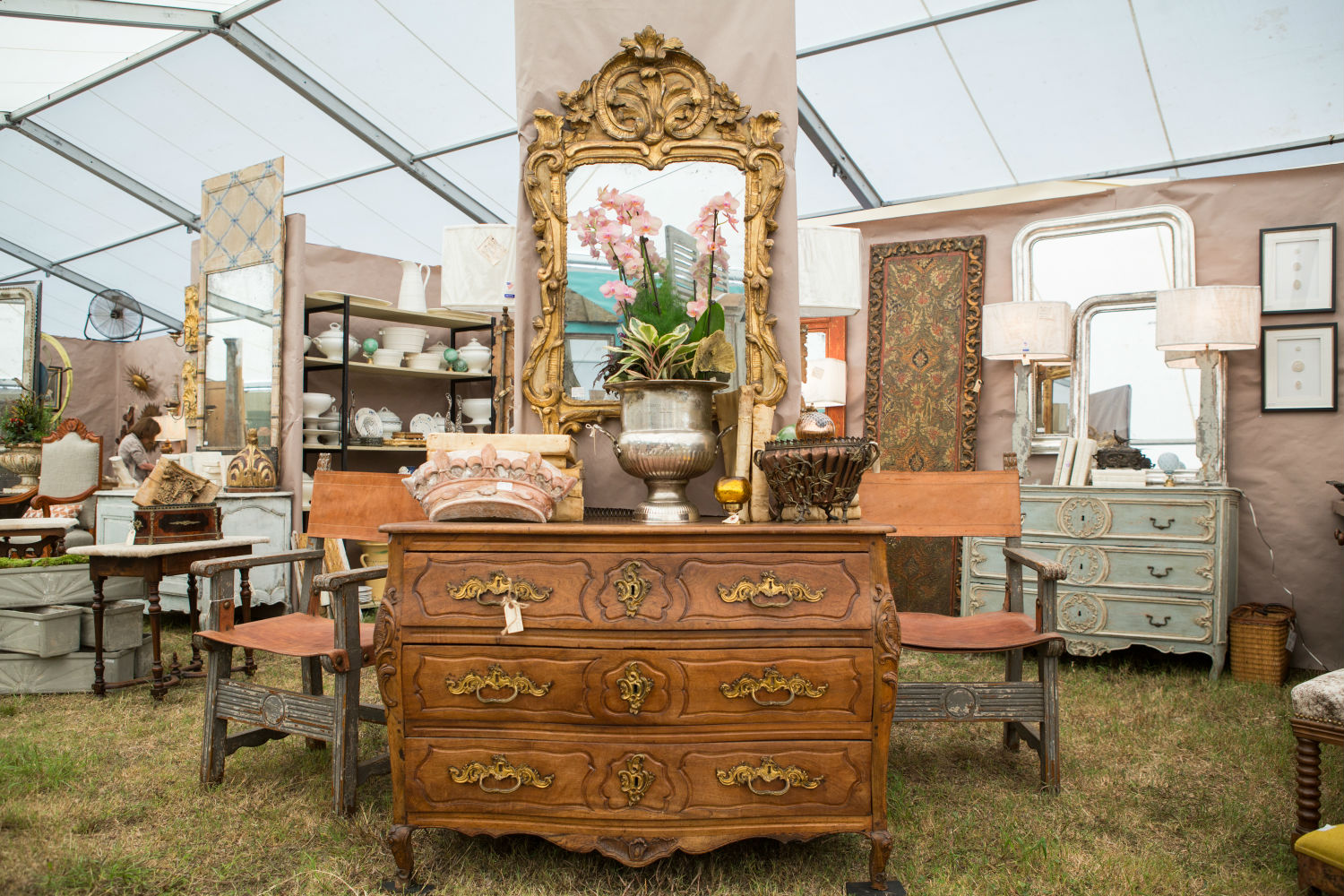 ROUND TOP, Texas – In 1997 the Marburger Farm Antique Show was the new kid on the block in Round Top, Texas. Bill Clinton was president, Seinfeld was the top TV show and an upstart named Microsoft had become the world’s most valuable business. Marburger Farm burst onto the scene, founded by two visionary antiques dealers in exactly the way that dealers thought a show should be run.

On March 28 through April 1, 2017, Marburger Farm celebrates 20 years of unleashing the creativity and resourcefulness of 350 of the best antiques dealers in the world. In 1997, Ed Gage and John Sauls co-founded the show on 43 acres of the once working farm of the Marburger family. As dealers themselves, they had access through the national dealer grapevine to seek out those who were ready to take responsibility for a higher quality kind of show with the level of daring display skills that few other shows could offer. Today the show features antiques, art, vintage and artisan creations by exhibitors from nearly every state and several countries. Nine giant tents and 11 historic buildings overflow with furniture, lighting, art, textiles, silver, jewelry, industrial, mid-century, formal, primitives and select artisan and repurposed creations.

Why has Marburger stayed so vibrant? “It’s the dealers,” says Polly Hitt of Neck Collections. Hitt will exhibit for her 20ht year at the show, presenting art jewelry made from antique, vintage and estate pieces. “The vendors here put so much pride and effort into their booths. You have 350 dealers who are each trying to have the best booth in the show. And they continue to evolve and stay fresh.” After 20 years, what’s the biggest misconception about the show?  “The biggest misconception is that everything here is expensive,” says Hitt. “You can find a $5 chair and a $50,000 chair. It’s all here.”

For the last 10 years, the show has been co-owned by the Texas families of Margaret Mebus and Ashley Ferguson. While Mebus can be found ringing the opening bell and jumping in to help serve lemonade, Ferguson serves as the show director.

“We wanted to build on the foundation that Ed and John built: great dealers and a fun atmosphere,” says Ferguson. “For each show we brainstorm on how we can make the experience better for both shoppers and dealers.”

Over the 20 years those improvements have included Wi-Fi, expanded free parking, air-conditioned restroom buildings, golf cart rentals, a rebuilt cafe, a wider range of food options, the Blacksmith Bar, Distinguished Transport Shippers on-site and a social media presence that appeals to a younger generation of buyers as well as to a growing number of top antiques dealers.

In 1997, social media did not really exist. Today, show staff member Tara Suel coordinates a full-spectrum of connection, including videos, the show blog, the show magazine, The Howdy, and lots of pictures and interaction on Facebook and other social media platforms. As South Carolina exhibitor Letha Polk of Le Petite Tresor puts it, “Marburger is really good at reaching out to younger buyers. They are the ones who need furniture to create their homes. This is a show that gets them here to see and buy merchandise from all over the world.” Polk will arrive at the 20th year show with architectural and garden antiques from American and French estates, including urns, lions and a large gold overlay mirror with cherubs.

While the dealers may set the spirit of the show, having the best customers in the world doesn’t hurt either. “I send out 400 postcards to my Marburger customers,” says Oklahoma exhibitor Suzanne Whitmire. Like many Marburger dealers, Whitmire shops in England and Europe, bringing containers full of antiques picked by her one at a time. She can only do that because Marburger customers come every time to buy and to enjoy the show. For this show, she has gathered 200 pieces, including English and French furniture, art, 65 carved wood architectural fragments from Paris, a grape-picker’s table and more.

To thank those world-class customers, the 20th year show offers a different celebration each day:

– On Tuesday March 28, the show celebrates with extended hours until 7 p.m. Shop, enjoy complimentary appetizers and stop by the Blacksmith Bar for a drink as the sun begins to set.

– On Wednesday March 29, all groups of 20 or more will receive 20 percent off admission. Email info@marburgershow.com to register your group.

– On Saturday April 1, “Marburger Gives Back” with a portion of ticket sales donated to local Fayette County first responders.

One of the original founders, Ed Gage, has returned as an exhibitor with antique American Indian jewelry, folk art and fine art. “Marburger Farm has a life-force of its own. It will always be a successful venture,” says Gage. “There is a drive among these dealers to roam the world looking for authentic, quality antiques and a community of shoppers who want quality. That’s the magic mix.”

The Marburger Farm Antique Show opens for breakfast and early bird parking at 8 a.m. on Tuesday, March 28, with early buying from 10 a.m. through 2 p.m. for $25 for adults, free for children 15 and under. Regular $10 admission begins that day at 2 p.m. Also on opening day, shop and party until 7 p.m. One admission is good all week, with the show running on Wednesday, Thursday and Friday, March 29–31 from 9 a.m. to 5 p.m. and on Saturday, April 1 from 9 a.m. to 4 p.m.  Advance group tickets are available.