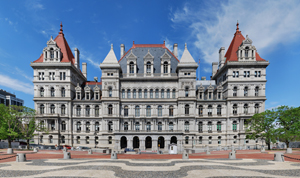 The New York State Capitol viewed from the south. Image by Matt H. Wade. This file is licensed under the Creative Commons Attribution 3.0 Unported license.

ALBANY, N.Y. (AP) – The fire started in the Assembly Library and quickly spread down the hall to the nearby New York State Library, finding plenty of fuel among towering shelves jammed with books and cabinets filled with hundreds of thousands of documents, many of them centuries old.

It would be several days before firefighters finally doused the last embers of the state Capitol fire that started in the early morning hours of March 29, 1911. Meanwhile, one man was dead and an untold wealth of New York’s history and heritage – from Dutch Colonial records to priceless Iroquois artifacts – had gone up in flames.

The disaster, according to the man who served as the State Library’s director before and after the fire, was unequaled in the history of modern libraries. The fire is estimated to have destroyed about 500,000 books and 300,000 manuscripts; only 7,000 books and 80,000 manuscripts were saved. The blaze also destroyed 8,500 artifacts in the New York State Museum, including irreplaceable Seneca Indian craftworks.

The Capitol blaze, coming just four days after the horrific fire at the Triangle Shirtwaist Co. factory in Manhattan, was the second blow in a pair of pyrotechnic disasters that led to legislation in Albany strengthening building codes and factory safety laws statewide, and eventually, nationwide.

New York is marking this week’s 100th anniversary of the Capitol fire with an exhibit, a new documentary film, a newly published book and public lectures by state librarians and historians.

“Few realize the extent of the disaster of 1911,” James I. Wyer, director of the State Library from 1908-1938, told the New York Post three years after the blaze engulfed the entire western portion of the Capitol, built in the French Renaissance style over a 32-year period and completed just a dozen years before the fire.

Joseph Gavit, the “Superintendent of the Stacks” whose 50-year career at the State Library started in 1896, staunchly believed the fire was started by careless smoking during a boozy party held in a room near the Assembly chamber, according to state librarians Paul Mercer and Vicki Weiss, co-authors of The New York State Capitol and The Great Fire of 1911.

Officially, the blame was laid on faulty wiring. What isn’t disputed is that the blaze ignited around 2 a.m. in what was then the Assembly’s third-floor library, just down the hall from the speaker’s office.

During a recent tour of the third and fourth floors, Capitol Architect James Jamieson described how the fire spread through the chamber’s library, where it intensified and blew out the tall windows overlooking one of the roofless interior courtyards designed to provide natural light and ventilation. That courtyard, along with another nearby and some elevator shafts, wound up acting as conduits for flames that jumped over ceiling spaces and engulfed the State Library, he said.

“Since it’s all intertwined, the fire would just find all these places to go,” Jamieson explained.

Once the flames reached the library, there was no hope of stopping them. More than half a million books were stacked floor to ceiling on pine shelves. Catalogs, newspapers, old manuscripts, journals, wooden desks and tables – all served as fuel. The heat was so intense it melted some of the building’s red sandstone columns that were quarried in Scotland, Jamieson said. Wind currents created by the fires spewed charred pieces of paper through blown-out windows, littering surrounding streets as if a parade had been held.

The first alarm didn’t arrive at the Albany Fire Department until 2:40 a.m. About 150 firefighters battled for hours before getting the conflagration under control, although debris would smolder for days. Gavit and others risked their lives running among the still-burning corridors to save books and documents. Among some of the important documents saved: the original manuscript of George Washington’s farewell address and an original Emancipation Proclamation, written in Abraham Lincoln’s own hand.

Arthur Parker, the first archaeologist hired by New York state, dashed among the State Museum’s display cases arrayed on the fourth floor, wielding a tomahawk passed down from a Seneca ancestor and using it as a fire ax as he rescued priceless Iroquois artifacts. He managed to save only about 50 out of about 500 Iroquois relics, said Betty Duggan, a State Museum curator.

“He was just heart-sickened by the fire,” Duggan said.

News of the fire soon reached many of the far-flung graduates of the New York State Library School, founded by Melvil Dewey and located in the Capitol’s northwest tower. For some, the destruction of so much written knowledge was like a death in the family, and the letters and telegrams they sent to Albany bore condolences from around the globe. The chief librarian at the Imperial University of Tokyo wrote: “I beg to express my deepest sympathy for the loss of the New York State Library by the recent fire.”

It took a year to rebuild and repair the damaged sections of the Capitol. Workers removed much of the soot from the scorched, blackened sandstone walls, but it wasn’t until a two-year, $2.4 million restoration project completed in 2006 that the Capitol’s Great Western Staircase was returned to its original condition.

“The Capitol fire is still haunting us,” said Nancy Kelley, exhibit planner for the State Museum, where a three-month exhibit on the fire runs through June 18. “One-hundred years later, we’re still dealing with the fire.”

There’s also some real haunting, according to Capitol lore. The ghost of Samuel Abbott, the disaster’s sole human casualty, is said to haunt the Capitol’s fourth floor, where the body of the 78-year-old night watchman was found.

While some say Abbott’s spirit still makes his nightly rounds, researchers and librarians often come across more tangible remnants of the fire among the files and volumes at the State Library and State Archives: documents charred around the edges or shriveled from being doused. Experts at the State Archives still work to conserve 20,000 documents rescued from the fire.

They range from such historic items as the Flushing Remonstrance, a 350-year-old Dutch document demanding religious freedom, to a Revolutionary War soldier’s appeal to be allowed to remarry, written after he had returned home to find his wife had joined the Shaker religious sect and no longer wanted a husband.

“There are lots of small stories to tell from these documents,” said Sue Bove, a conservation expert at the State Archives. “They may not be glamorous, but they’re a source of information on what our forefathers had to endure.”

Another item saved from the blaze is a page, circa 1675, from a wealthy Dutch woman’s account with an Albany baker. The entry shows a purchase of “Sinterklaas” goodies. Mercer and Weiss believe it could be the earliest record of the celebration of the feast of Saint Nicholas – aka Santa Claus – in the New World. 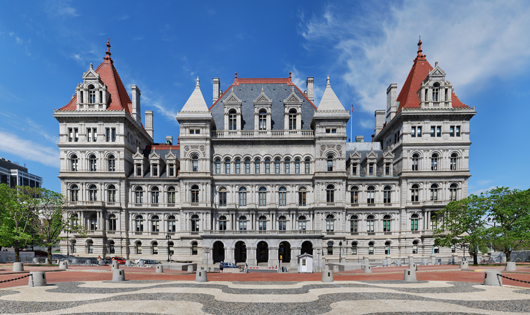 The New York State Capitol viewed from the south. Image by Matt H. Wade. This file is licensed under the Creative Commons Attribution 3.0 Unported license.

Korean Ceramics from Leeum Collection at The Met, starting April 7
Scroll to top