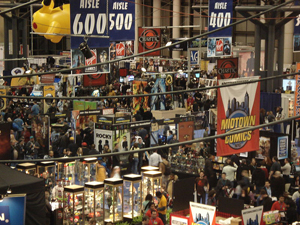 NEW YORK – The 2010 edition of New York Comic Con (NYCC) is nearly sold out. Show organizers are pleased to note that on the occasion of its 5th anniversary, the annual pop culture convention, which began on the lower level of the Jacob K. Javits convention center in 2006, will now occupy the entire facility and will boast a more diverse range of exhibitors than ever before. The event will be co-located with the New York Anime Festival (NYAF) and will take place Oct. 8-10, 2010.

The show will be 50% larger than just last year and new exhibitors, such as West Coast based IDW Publishing, have joined many other new companies to expand the range and scope of what is presented to the thousands of fans, professionals and media in attendance.

Organizers recently announced a partnership with Cultyard, Inc. which will bring a new and focused pavilion for Art, Design, Collectible Toys, Pop-Tech, and Fashion to NYCC. And in the next several weeks, major Hollywood studios and TV production companies will reveal their considerable plans for this year’s convention.

“This is going to be a huge year for New York Comic Con,” said Lance Fensterman, vice president of ReedPOP and show manager for NYCC. “We have grown enormously in the five years since we started, and this year promises to be our biggest growth year of all. We have an awesome range of content, including comics, which will always be our heart and soul, but also movies, TV, toys, fashion, collectibles, you name it. Our goal has been to be a pre-eminent pop culture convention, providing relevant and innovative content in every area of the pop culture universe, a place where thousands upon thousands of fans in capes and tights, and suits and ties, can see new product as well as meet and greet their favorite artists, creators, and writers. We have achieved that goal and we are looking forward to making this year’s NYCC a spectacular and memorable event for every single participant.”

As noted, IDW Publishing is one of the many new publishers who will be participating in NYCC this year. IDW is an award-winning publisher of comic books, graphic novels and trade paperbacks and is renowned for its diverse catalog of licensed and independent titles. IDW Publishing will be bringing the Eisner-Award winning writer and artist Darwyn Cooke to NYCC to promote The Outfit, the second of Richard Stark’s Parker novels that Cooke is adapting, and which will be available in October, 2010.

A few of the first-time Cultyard exhibitors include Tokidoki & Simone Legno, Tara McPherson, Tenacious Toys, Toy Tokyo and StrangeCo, among others. These brand new exhibitors will be joining established participants such as DC, Marvel, Dark Horse, Image and Top Cow, to name a few.

As previously stated, movie and TV studio participation at NYCC is expected to be very strong this year, with announcements about guest appearances and previews coming very soon.

ReedPOP is a boutique group within Reed Exhibitions which is exclusively devoted to organizing events, launching and acquiring new shows, and partnering with premium brands in the pop culture arena. ReedPOP is dedicated to producing celebrations of popular culture throughout the world that transcend ordinary events by providing unique access and dynamic personal experiences for consumers and fans. The ReedPOP portfolio includes: New York Comic Con (NYCC), Chicago Comic and Entertainment Expo (C2E2), Penny Arcade Expo (PAX) East & West, Star Wars Celebration V, New York Anime Festival (NYAF), and UFC Fan Expo. The staff at ReedPOP is a fan-based group of professionals producing shows for other fans, thus making them uniquely qualified to service those with whom they share a common passion. ReedPOP is focused on bringing its expertise and knowledge to world communities in North America, South America, Asia and Europe.