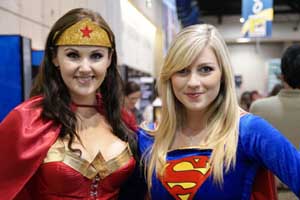 It’s not unusual to see attendees like these two from 2010 at the convention or around town in costume. Photo by Michael A. Solof.

SAN DIEGO (ACNI) – Superman, Batman and Spider-Man walk into a bar … Not only is it not the setup line to a joke, but the locals don’t even bat an eye. If this sounds familiar, there are good chances you’re in San Diego this week.

There are still comic book purists who grumble about the evolution of the once-humble Comic-Con International: San Diego, but they are in the minority as the world of popular culture descends on the San Diego Convention Center for the show, which runs Thursday, July 21, through Sunday, July 24. For exhibitors, professionals and those holding four-day passes, the convention actually opened on Preview Night.

Movie studios pushing upcoming projects, film and TV stars and producers hyping their latest efforts, publishers promoting their latest comic book and science fiction properties, toy manufacturers, T-shirt makers, and other vendors long ago joined the comic book dealers and collectors who have helped the attendance swell over the decades.

Best-known colloquially as Comic-Con or the San Diego Comic-Con, the convention started out in 1970 as the Golden State Comic-Con with a reported attendance of 300 at the stately U.S. Grant Hotel. For the last three years attendance has been capped by local authorities in the 125,000–130,000 range. In fact, not-for-profit Comic-Con organization, which also runs WonderCon and the Alternative Press Expo, both held in San Francisco, was at loggerheads with the city and recently extracted a promise to expand the convention facilities to keep the show in San Diego. Los Angeles, Anaheim and Las Vegas have been reported by numerous sources as having made significant pushes to land the convention.

To put Comic-Con’s growth rate in context, as recently as 1994, when the San Diego Conention Center was half of its present size, the convention did not fill all of the halls. Two years later, when the facility was doubled in size in advance of the 1996 Republican National Convention, movie studios, video game makers and other entities began gobbling up the new floor space. Today activities and panel groups fill not only the convention center, but also surrounding hotels and other venues.

It is, of course, big business. Buoyed on one end by the continued box office success of comic book-based films and on the other by the high-profile entry of vintage comic books into the $1 million range, pop culture fans of many different niches trek to San Diego each year, filling hotels to capacity (advice: make your reservations for next year right now), flooding restaurants and bars, and in general making local merchants happy.

In addition to the generally perfect weather – it’s in the mid-70s this week, for instance – one of the things that has always weighed in San Diego’s favor has been its eminently walkable downtown area. The historic Gaslamp district is dotted with hotels new and old, shops, and a spectacularly diverse selection of restaurants. Many veteran comic book dealers have pointed out that this is the one show on their circuit at which they can eat both well and healthily.

And they’ll have a lot to talk over while they’re eating. Of the approximately 100 copies of Action Comics #1 (the first appearance of Superman), known to exist, there are at least four in the main hall for sale or up from bid. There are also a significant number of rare pieces of comic book art and many other rare, vintage high-grade comics as well. Auction houses including Heritage Auctions, Profiles in History and Propworks will be represented along with comic-centric auctioneers and other dealers.

Back to Superman, Baman and Spider-Man walking into a bar: It’s not at all usual to be dining next to people in costumes inside restaurants or hotels that have been professionally re-branded by inventive marketing types for the duration of the convention. For instance, right at the entrance arch for the Gaslamp district, the Hard Rock Hotel has been taken over by Spider-Man. On one end of the convention center, the Hilton San Diego Bayfront (as opposed to the Hilton Gaslamp, just across the street from the convention center) has had its exterior co-opted by the upcoming feature film Cowboys and Aliens, which was based on a graphic novel.

Over the course of Comic-Con, we’ll have news and photos each day. 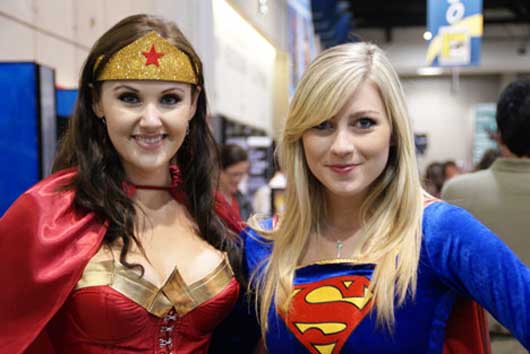 It’s not unusual to see attendees like these two from 2010 at the convention or around town in costume. Photo by Michael A. Solof. 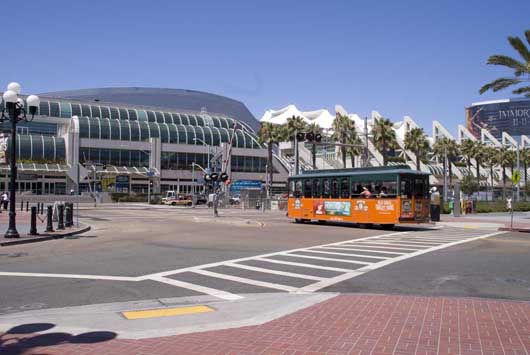 A tour bus in the form of a trolley rolls by the front of the San Diego Convention Center on Tuesday. Inside, frantic preparations for Comic-Con International: San Diego were under way. Photo by Michael A. Solof. 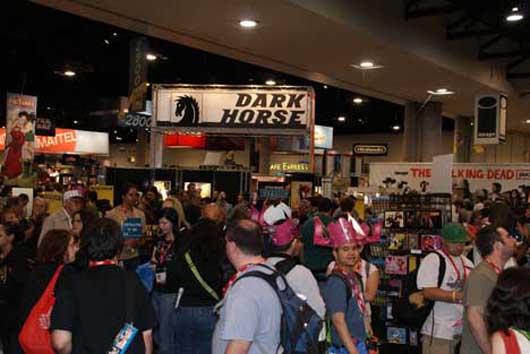 As seen here at Comic-Con 2010, in addition to visiting dealers in search of comic books, toys and other collectibles, attendees can also stop by the booths of comic book publishers, game manufacturers and movie studios to see the latest promotional items. Photo by Michael A. Solof. 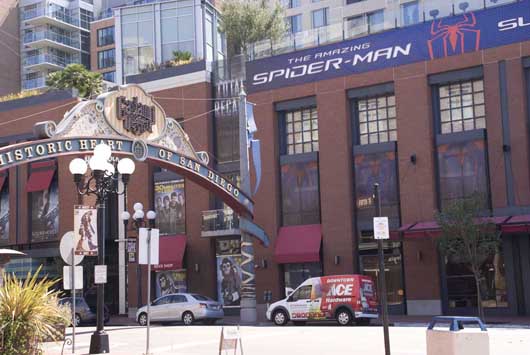 Sony has branded the Hard Rock Hotel, located at the entrance to the Gaslamp district, for its 2012 release of ‘The Amazing Spider-Man,’ its fourth Spider-Man feature film. Photo by Michael A. Solof. 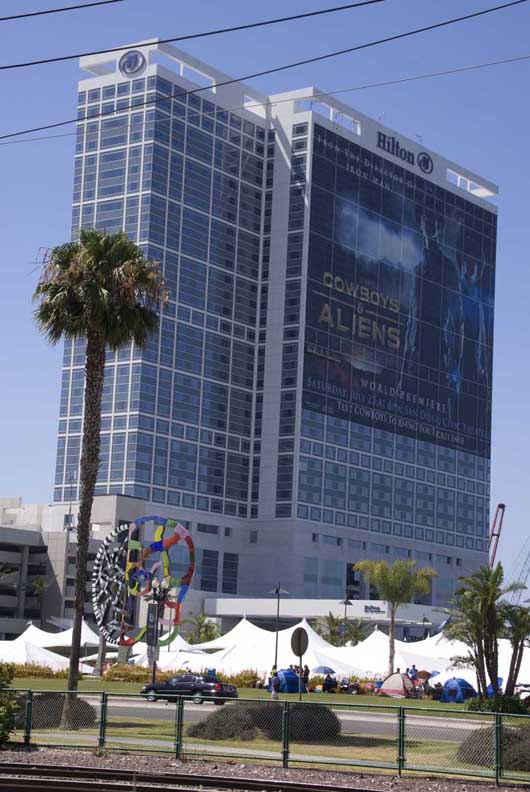 The Hilton Bayfront, situated at one end of the San Diego Convention Center, has been branded for the upcoming feature film ‘Cowboys and Aliens.’ Photo by Michael A. Solof. 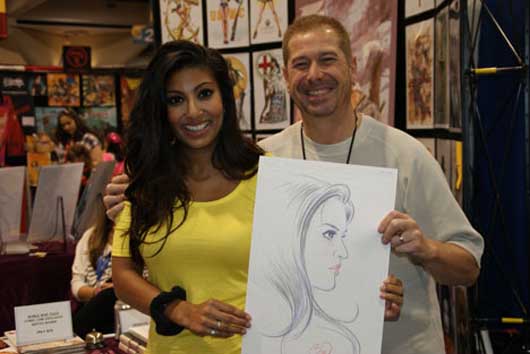 Comic-Con is a destination for local, national, and even international media. Kaushal Patel, a news anchor at San Diego’s Fox affiliate, Fox 5, stopped by Comic-Con 2010, where she met Sgt. Rock writer-artist Billy Tucci, who immediately whipped up a sketch of her. Photo by Michael A. Solof. 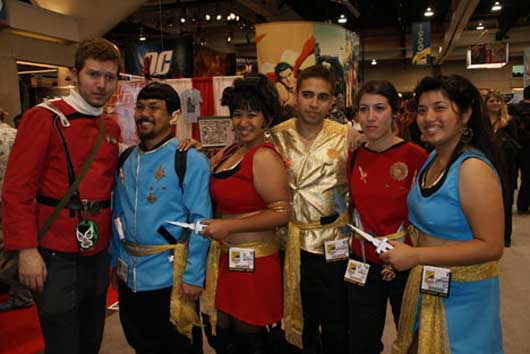 Whether from recent films such as ‘Avatar’ or perennials like ‘Star Trek’ (like these fans from Comic-Con 2010), the convention continues attracting fans who come in groups. Photo by Michael A. Solof.

EBay revenue up, but takeover weighs down profit