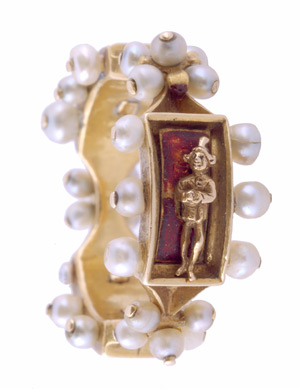 LONDON – Roman to Renaissance, an exhibition devoted to a private collection of 35 rings dating from 300 to 1600 AD, will be staged by the Paris gallery Les Enluminures at the venue of London dealer Wartski, 14 Grafton St., May 12-22.

The collection was formed over two decades by Sandra Hindman, professor emerita of art history at Northwestern University and owner of Les Enluminures, a gallery in Paris and Chicago specialising in illuminated manuscripts and works of art from the Middle Ages and Renaissance.

Starting with a small French private collection, Hindman has assembled a coherent group that represents the high points in the history of the ring from the Late Antique period to the end of the Renaissance, including key examples of museum quality.

The tradition of collecting rings dates to the 17th century when their significance was first appreciated in Europe. Rings shed light on vanished worlds and bring their former owners and the skilled craftsmen back to life. Some rings are intensely personal, particularly betrothal, wedding and mourning rings, while others denote the status of their owners: monarchs, nobles, those who held high office in the church, for example, and rich merchants.

One of the oldest rings in the collection is an early Christian Roman gold marriage ring, circa 500, of a type that was popular in the Roman Empire and Byzantium from around the fourth to the seventh century. Engraved with a male and female bust beneath a small cross, the inscription VIVATIS (long live) appears in reverse indicating the ring was also used as a seal.

From fifth-century Eastern Europe is a gold cloisonné ring in the form of a rhomboid set with sliced garnets, surrounded by eight cabochon garnets, a favorite inlay at the time. It belongs to a group of some dozen rings associated with the Huns, nomadic tribes that moved from the steppes of Central Asia into Eastern Europe in the fourth century.  A mid-sixth century architectural gold and garnet ring from Merovingian Gaul (France) is of a type mostly found in northern Gaul in the tombs of aristocratic women. It is thought that these rings, which resemble early medieval baptisteries, may be symbols of Christianity in Gaul, which was converted in 496.

Among the Byzantine rings is an important 11th-century gold ring with Christ Pantocrator (all sovereign) in relief set in a blue, cloisonné-enameled Greek cross. The size and quality of this ring indicate that it belonged to an important person, as does the Greek inscription engraved around the gold band, which translates as, “Receive the suppliant before you, despite his sinfulness.” This puzzling inscription is otherwise only known from a sixth-century ivory consular diptych associated with Emperor Justinian in the British Museum.

Gothic examples include a magnificent gold stirrup ring set with a cabochon sapphire and engraved with the initials E and N on each side. Known as a bishop’s ring, it is English or possibly French, circa 1200. Another fine Gothic ring is a 13th-century gold signet ring from France or Italy. The perimeter of the oval bezel is engraved in Lombardic letters in Latin with the New Testament text “John is his name.” The center is set with a classical intaglio of a Roman in profile carved in a deep red carnelian.  An early 15th-century English Gothic ring is an especially fine example of a devotional iconographic ring.  The bezel is engraved with a triptych, the Throne of Mercy flanked by the Angel Gabriel and the Virgin Mary of the Annunciation. The interior is engraved in Gothic script LOYAL SUI (I am loyal, or faithful).

Renaissance rings include a rare and beautiful mid-15th century ring from French-Flanders in the Gothic International Style, probably made at the French court. The gold ring combines small clusters of seed pearls, purchased from Baghdad merchants, with three rectangular gold plaques of imaginative figural motifs set in translucent red enamel. A 15th-century Northern European gold cusped ring widens at the shoulders to a large octagonal bezel set with a polished orange hessonite garnet held in place by gold prongs. Such cusped rings mark the start of an era increasingly interested in showing off precious stones and their popularity is evident in the many paintings that feature them.

A German Renaissance merchant’s ring, dated 1564, is rare. It has a swivel bezel with an engraved merchant’s mark on one side and the Crucifixion with Mary and John on the other carved from rock crystal over foil, a virtuoso Renaissance technique. The Greek inscription on the hoop KYRIE ELEISON (Lord have mercy) is an unusual feature. The owner would have been a wealthy merchant, a devout believer and a humanist scholar similar to the German members of the Hanseatic League in London painted by Hans Holbein the Younger.

The exhibition will be complemented by a lecture program and a catalog in English published by Paul Holberton, London, with an introduction by Diana Scarisbrick, a renowned jewelry historian. Organised chronologically, Sandra Hindman’s descriptions offer comparisons with rings in major public collections and place each one in its art-historical context.  Ilaria Fatone, art historian and director of Les Enluminures, will discuss the provenance, exhibitions and bibliographies of each ring and, where possible, the catalog also includes a census of each type of ring from examples in public and private collections. A technical section by the conservator Angélique Laurent-Di Mantova studies each ring, its material, fabrication and use. 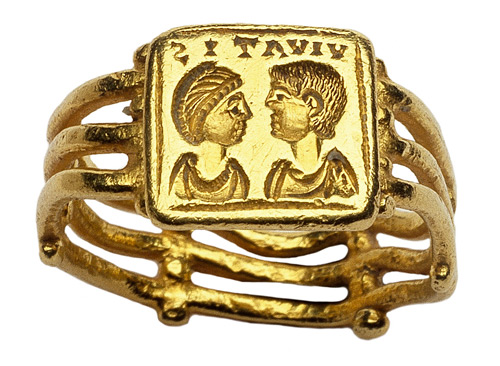 Early Christian Roman gold marriage ring, circa 500, of a type that was popular in the Roman Empire and Byzantium from around the fourth to the seventh century. Image courtesy Les Enluminures – Wartski. 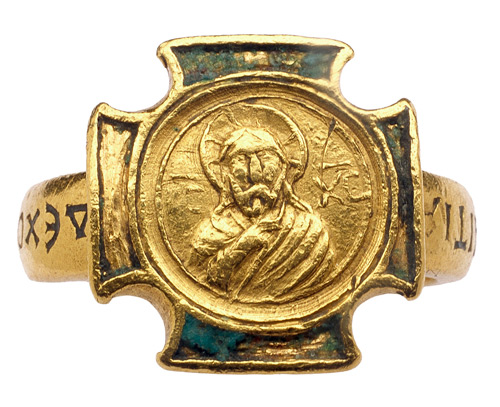