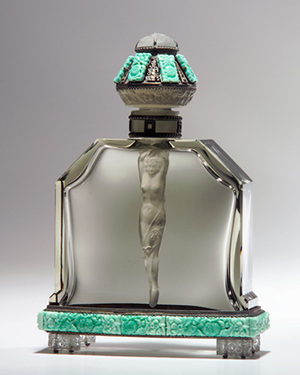 The bottles come from some 15 years of collecting and her years spent as a perfume buyer for Marshall Field’s department stores in Chicago.

Her collection includes mini bottles that manufacturers gave out as samples, but they aren’t the little cylindrical vials we typically get today: These bottles are often miniature versions of the full sizes. Schoonhoven has a number of porcelain crown-top bottles with cute designs and trinkets on the lids, such as a boy and a girl kissing. One of her oldest items is a powder box from the 1920s. She spends from $10 to $100 for additions to her collection, but some serious perfume-bottle collectors pay thousands of dollars for a prized item.

“It’s really incredible,” says Schoonhoven, 69, about her hobby. “For some people, it’s going to be that they have something that nobody else has. It might be that rare.”

Schoonhoven will join more than 200 perfume-bottle collectors from around the world at the International Perfume Bottle Association 26th annual convention, held the first few days of May at the Wyndham Grand Pittsburgh, Downtown. This year’s theme is “Bottles That ‘Steel’ Your Heart.”

Many parts of the convention, including a live auction, are open to the public. Visitors will see an array of bottles and other perfume containers, such as those for solid perfumes, topped by figures like frogs or Ferris wheels.

Some bottles are more than two centuries old, while others are, maybe, a few decades old. Bottles are commercial, like those from Estee Lauder and Coty, and noncommercial, those that contained a fragrant concoction made at an apothecary.

“We want to invite the public in to see what they’re all about, and, maybe, they will be interested, as well,” says Teri Wirth, the association vice president. The convention is full of “jaw-dropping, beautiful bottles.”

The hobby of collecting perfume bottles draws about 60 percent women and 40 percent men, Wirth says. Some travel thousands of miles around the world looking for their treasures. Wirth recalls a bottle, once owned by a maharaja, that sold for $65,000 at an auction.

“It’s like collecting anything – it’s whatever you like,” she says. “Whatever makes your heart thump, beat or go pitter-patter.

“We’re fascinated with all of it,” Wirth says about perfume bottles, some of which maintain a trace of the perfume scent years later.

Wirth bought her first perfume bottle several years ago at an antiques auction.

“It just caught my eye,” she says about the melon-shaped bottle. “I’ve been hooked ever since. It’s a tug at your heartstrings, I guess.”

Pittsburgh makes a good location for the convention because of its rich glass history, says Anne Madarasz, the keynote speaker. She is museum division director at the Senator John Heinz History Center and director of the Western Pennsylvania Sports Museum. Madarasz wrote the book Glass: Shattering Notions‘ and is the curator of the matching exhibit at the Strip District center, which has a few perfume bottles.

“I think it’s recognizing that this is a place that had a really long and great history related to glass,” Madarasz says. “It was a perfect place to celebrate the material.

“We’re excited to see all these collectors here, and we hope they’ll think about us in the future,” Madarasz says. “It’s a great opportunity for us to talk about the fact that we have one of the first regional collections of glass in the country.”

Association members are eager to educate convention visitors about their hobby.

“There are people all over the world who collect all sorts of different things,” Madarasz says. “It’s great when they come to Pittsburgh and we have the chance for that expertise and passion.”

The appeal of perfume bottles is the fancy factor, she says.

“Great perfume throughout time is a luxury item,” Madarasz says. “You don’t put a luxury item in an everyday (container).

“These bottles become works of art.”