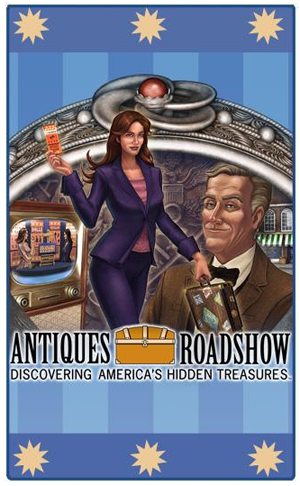 The Antiques Roadshow game enables the user to find valuable hidden antiques in more than 30 detailed locations, then have them restored and appraised at the Antiques Roadshow. Each adventure is a learning experience in which clues are found and deciphered for hidden messages. Image courtesy of WGBH and Antiques Roadshow. Copyright 2008-2011 Namco Networks America, Inc. All rights reserved.

SAN JOSE, Calif. (BUSINESS WIRE) – Namco Networks, a leading publisher and developer of interactive content, today announced the release of Antiques Roadshow on PC for $9.99, with the iPad version of the game becoming available early next year.

Following the popular PBS television series, the new Hidden Object game includes 30 visually stunning locations with hundreds of antique items. The player guides Julia, a history teacher hired at an antiques shop, through an adventure of lost items and photos as she pieces together the story behind the shop and its owner, Mr. Hinton. As Julia finds the objects, a backstory unfolds revealing its historical significance.

Each location features items in need of refurbishing that players can perform through five unique minigames. Players can then take the items to Antiques Roadshow for appraisal to determine their true value, further propelling the story. The treasure hunts throughout the distinct venues and minigames leave clues aiding her in her mysterious journey.

“We wanted to bring the thrill of discovering unexpectedly valuable items as seen on the show, directly to the player’s home,” said Carlson Choi, vice president of marketing at Namco Networks. “Following the PC launch will be the iPad version early next year, making the game accessible to handheld devices.”

The hit television show began in 1977 and currently generates almost 10 million weekly viewers in the U.S. Antiques Roadshow is the first game Namco has published through a licensing agreement with WGBH and BBC. “Namco’s genius is in taking the most iconic elements of the Antiques Roadshow TV format — narrative, exploration, discovery, and surprise — and using them to create something completely new and fresh,” said Antiques Roadshow executive producer Marsha Bemko.

A free 60-minute trial can be downloaded at namcogames.com/pc_games prior to the game being available on other casual PC game portals, including but not limited to Big Fish Games, Inc. and GameHouse.

Namco Networks America Inc., a subsidiary of NAMCO BANDAI Holdings (USA) Inc., is a global publisher and developer for interactive content across multiple platforms, including mobile, iOS, PC and Web-based casual games. More information about their products can be found on namcogames.com, Facebook or Twitter.

Namco and all related logos, designs, and elements are the trademarks and © of Namco Networks America Inc. 2010. All rights reserved.

Books in Review: Antiques Roadshow Behind the Scenes