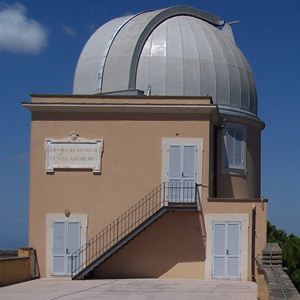 The Vatican Observatory telescope at Castel Gandolfo, Italy. This file is licensed under the Creative Commons Attribution-Share Alike 3.0 Unported license.

ROME (AP) – Four hundred years after Galileo Galilei first demonstrated his telescope to scholars on a Roman hilltop, the astronomer condemned by the Catholic Church was celebrated on the same spot with a multimedia art exhibit that, oddly enough, included an installation from the Vatican.

Heliographs, astrolabes and other antique astrological instruments that belong to the Vatican Observatory stood alongside contemporary art inspired by Galileo and his science: rows of intensely hot, blindingly bright floodlights simulating the sun; a performance by a Tibetan musician playing a telescope-like horn.

The event took place Thursday night at the American Academy in Rome, a research center for the arts and humanities whose gardens lie on the exact spot where, on the night of April 14, 1611, Galileo showed off his telescope for the first time to the most important scholars of his time.

Galileo made the first complete astronomical telescope and used it to gather evidence that the Earth revolved around the sun. Church teaching at the time had placed Earth at the center of the universe. The church denounced Galileo’s theory as dangerous to the faith, but Galileo defied its warnings. Tried for heresy and forced to recant in 1633, he spent the rest of his life under house arrest.

The Galileo affair helped spawn the impression that the Catholic Church was hostile to science, an impression the Vatican has tried to rebut ever since. Its Observatory, which produces top-tier science with telescopes outside Rome and in Arizona, is Exhibit A of those efforts.

“It’s not a simple ‘The church was against science,’” said Brother Guy Consolmagno, a Jesuit astronomer at the Vatican’s Observatory. “The church never speaks with one voice on these things.”

Galileo’s demonstration 400 years ago Thursday, to Jesuit scientists and Federico Cesi, who founded an important early academy of sciences, was one of the key events in 1611 that helped propel him into top scientific circles two years after he made his first celestial observations.

“In some ways this is the high-water mark for Galileo: He is accepted by the Jesuits at the Roman College, who are the authorities in science in the church. He’s accepted by Prince Cesi, who is the authority among the nobility,” Consolmagno said. “Both were at this demonstration. And with those people behind him, I’m sure he felt confident he could withstand any attacks.”

Consolmagno was on hand Thursday night for the anniversary event at the American Academy, a beautiful palazzo located on Rome’s Janiculum Hill, where every year a handful of American and Italian fellows in the arts and humanities come to live and work.

Four hundred years ago, the academy’s garden was a vineyard belonging to a Galileo friend who let the astronomer use its location high above the city to show the gathered scholars what could be seen in the night sky with his telescope.

As night fell Thursday, the academy’s lawn twinkled with candles mapped in an exact replica of the stars that would have been visible on the night of April 14, 1611. Nearby, a video installation juxtaposed monologues of Galileo’s works with those of church officials. Author Dava Sobel read from her 1999 best-selling book Galileo’s Daughter, based on correspondence between the scientist and his convent-bound daughter.

Had it not rained, telescopes ancient and new would have given some of the 700 guests a look at the stars. Instead, the guests – who included artist Chuck Close, a onetime Academy fellow and current board member – mingled over pink bubbly and dinner prepared by chefs of the academy’s sustainable food program.

T. Corey Brennan, in charge of the humanities program at the Academy (and a one-time lead guitarist for The Lemonheads), said he decided years ago that the institution would have to do something special to mark the anniversary.

“The way to celebrate it, I felt instinctively, was well beyond an academic conference but to try to leverage all 15 fields represented at the Academy,” he said, listing music composition, literature, art history and landscape architecture.

At the same time, he knew the Vatican, located just down the hill, had to be involved as well given its somewhat tortured history in the Galileo affair.

“For many years we’ve been neighbors, and we use the Vatican all the time: Our fellows are some of the people who are first in in the morning at the Vatican Library,” he said. “But I don’t think we’d ever invited the Vatican up the hill.”

Consolmagno became the Vatican Observatory’s de-facto ambassador for the anniversary, and gave it his blessing Thursday night.

“This event fits all the criteria for what we in the’60s called a ‘happening,’” he said. 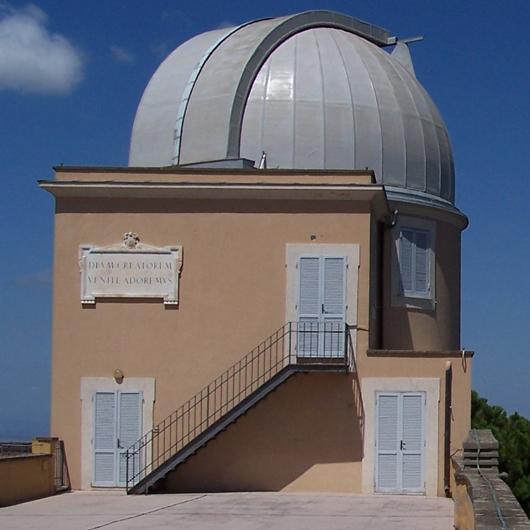 The Vatican Observatory telescope at Castel Gandolfo, Italy. This file is licensed under the Creative Commons Attribution-Share Alike 3.0 Unported license.

Vatican reverses itself, painting not a Caravaggio