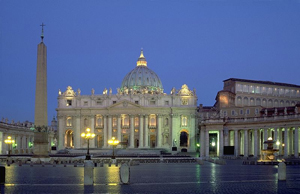 St. Peter’s Basilica, The Vatican, at early morning, taken by Andreas Tille on May

VATICAN CITY (AP) – Executives from Facebook, Wikipedia and Google are attending a Vatican meeting to brief officials and Catholic bishops about the Internet and digital youth culture.

The symposium, which opened Thursday and runs through Sunday, also will address Internet copyright issues and hacking – including testimony from a young Swiss hacker and an Interpol cyber-crime official.

The meeting is being hosted by the European bishop’s media commission and is designed to delve into questions about what Internet culture means for the church’s mission and how the church communicates that mission to others.

Pope Benedict XVI has tried to bring the Vatican into the Internet age by launching a YouTube channel earlier this year. Officials say he also e-mails and surfs the Web.

But the Vatican’s online shortcomings have been woefully apparent.

Earlier this year, Benedict made clear he was disappointed that Vatican officials hadn’t done a simple Internet search to discover the Holocaust-denying comments of an ultraconservative bishop whose excommunication he had lifted.

The outrage over the rehabilitation of Bishop Richard Williamson, of the traditionalist Society of St. Pius X, prompted Benedict to write a letter to his bishops admitting mistakes and saying that he had “learned the lesson” and that the Vatican would in the future pay greater attention to the Internet as a source of news.

The symposium, which is drawing about 100 participants from around Europe, could be seen as part of that effort.

Panels will discuss social networks, the Web generation, the church’s communication strategies, and whether the Internet is changing religious practices.

The Vatican’s top communications official, Archbishop Claudio Maria Celli, has said a key priority of the Catholic Church is to be able to use new technologies to spread its message, particularly to the young.

“Our dream in this global village created by new technologies is that the church and Jesus’ disciples can have their tent – Jesus’ tent – so that the attention of men and women who walk the streets of the world is turned toward it,” he said recently on Vatican Radio.

In that way, the Internet is just the latest means that the Vatican has used to spread its message, starting with parchment, printing press, radio and television.

Pope John Paul II used mass media and information technology to get out his message, overseeing the 1995 launch of the Vatican’s Web site, www.vatican.va, which today includes virtual tours of the Vatican Museums and audio feeds from Vatican Radio. Could Internet auctions from the Vatican be that far away?