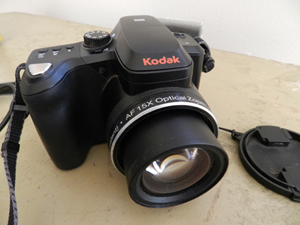 A Kodak Easyshare Z1015 IS digital camera. Image by CaptainPerla. This file is licensed under the Creative Commons Attribution-Share Alike 3.0 Unported license.

ROCHESTER, N.Y. (AP) – Eastman Kodak is selling its digital imaging patents for about $525 million, money the struggling photo pioneer says will help it emerge from bankruptcy protection in the first half of next year.

Apple Inc., Google Inc., Samsung Electronics Co., Research In Motion Ltd., Microsoft Corp., China’s Huawei Technologies, Facebook Inc. and Amazon.com Inc. are among the 12 companies paying to license the 1,100 patents, according to court filings. Patents have become very valuable to digital device makers, who want to protect themselves from intellectual property lawsuits. But Kodak, which has been trying to make the sale happen for more than a year, wound up receiving substantially less money than had been expected.

Rochester, N.Y.-based Eastman Kodak Co. said Wednesday that the patent sale will help it repay a substantial amount of a loan it received under the bankruptcy process. It also satisfies a key condition of a new, cheaper $830 million loan package, which required that the patents be sold for at least $500 million.

Founded in 1880, Kodak filed for Chapter 11 bankruptcy protection in January after a long struggle to stay relevant. First came competition from Japanese companies, then the shift from film to digital photography over the past decade. Kodak failed to keep up. The once-mighty company, whose workforce peaked at 145,300 in 1988, said at the end of September that it expected to wind up with 13,100 employees after another round of job cuts.

Since filing for bankruptcy protection, Kodak has sold off several businesses, such as its online photo service, and said it would shut down other divisions, including the manufacturing of digital cameras. The company intends to focus on commercial and packaging printing. It sees home photo printers, high-speed commercial inkjet presses, software and packaging as the core of its business as it emerges from bankruptcy.

Kodak began mining its patent portfolio for license revenue in 2008. In January 2010, it sued Apple and RIM, saying that smartphone makers infringed its patent for technology that lets a camera preview low-resolution versions of a moving image while recording still images at higher resolutions.

But by July 2011, it was trying to sell its 1,100 digital imaging patents. Analysts initially thought the portfolio could fetch between $2 billion and $3 billion. But Kodak struggled to find a buyer.

The 12 licensees for Kodak’s imaging patents were organized by Intellectual Ventures and RPX Corp. Kodak spokesman Christopher Veronda said each licensee will pay a portion of the total cost and then have access to all the patents. The deal also includes an agreement to settle patent-related litigation.

The sale represents “another major milestone toward successful emergence” from bankruptcy, said Antonio M. Perez, Kodak’s chairman and CEO, in a statement. “Our progress has accelerated over the past several weeks as we prepare to emerge as a strong, sustainable company.”

Kodak will keep ownership of about 9,600 patents, focused mostly on commercial imaging and printing technologies. 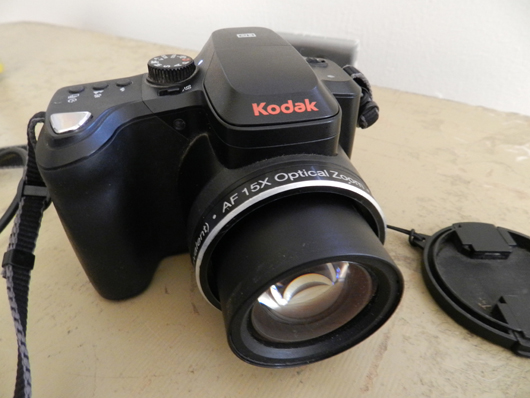 A Kodak Easyshare Z1015 IS digital camera. Image by CaptainPerla. This file is licensed under the Creative Commons Attribution-Share Alike 3.0 Unported license.

Is Eastman Kodak at the end of the roll?