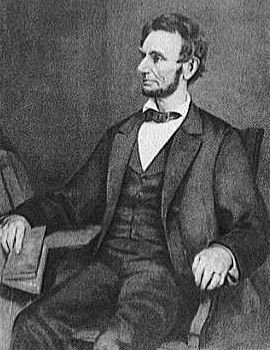 PHILADELPHIA (AP) – John Sotos has a theory about why Abraham Lincoln was so tall, why he appeared to have lumps on his lips and even why he had gastrointestinal problems.

The 16th president, he contends, had a rare genetic disorder – one that would likely have left him dead of cancer within a year had he not been assassinated. And his bid to prove his theory has posed an ethical and scientific dilemma for a small Philadelphia museum in the year that marks the 200th anniversary of Lincoln’s birth.

Framed behind glass in the Grand Army of the Republic Civil War Museum and Library in northeast Philadelphia is a small piece of bloodstained pillowcase on which the head of the dying president rested after he was shot at Ford’s Theater in Washington 144 years ago.

Sotos, a cardiologist and author, is hoping a DNA test of the strip will reveal whether Lincoln was afflicted with multiple endocrine neoplasia, type 2B. The disorder, which occurs in one in every 600,000 people, would explain Lincoln’s unusual height, his relatively small and asymmetric head and bumps on his lips seen in photos, he said.

The disorder leads to thyroid or adrenal cancer, and Sotos cites Lincoln’s weight loss in office and an appearance of ill health during his final months. He said a finding that Lincoln had the genetic disorder and probably cancer could shed light on his presidency.

Several months ago, Sotos petitioned the museum for permission to test the pillowcase. Gary Grove, a Civil War enthusiast who advised the museum’s board of directors, said the issue has been contentious in several meetings.

“There are strong voices both ways,” Grove said. “It has taken up a good portion of those board meetings.”

Eric Schmincke, president of the museum and its board, said members may decide at a meeting May 5. They must consider not only possible damage to the artifact but also moral issues, he said.

“You have to look at it as questioning someone that more or less can’t defend themselves,” Schmincke said.

“That’s him – that’s his blood, his brain matter that’s on there,” he said. Schmincke also questioned what a positive result would mean.

“If they find it’s cancer … it’s 140-plus years later,” he said. “Would it have been different? We can only guess or surmise.”

If Lincoln was seriously ill and knew it, Sotos said, that might explain stories of his premonitions about death.

“I don’t think it was mysticism, I think that was him knowing what his body was telling him,” Sotos said. “Then if you’re a historian, I think you have to say … how does that affect how you run the war, your clemency toward soldiers who may have deserted their post, the way you reconcile with the South?”

One problem with his theory, which he acknowledges: People with MEN-2B normally die young, and Lincoln was 56 when he was shot. And the malady is only one of several ascribed to Lincoln; researchers in the 1960s suggested another genetic disorder, Marfan syndrome, to explain his height, and others say his clumsy gait could have been due to spinocerebellar ataxia.

Tests have been done on the remains of presidents to settle controversies, most famously for evidence on whether Thomas Jefferson fathered children of his slave, Sally Hemings, and to rule out arsenic poisoning in the death of Zachary Taylor.

Other museums, however, have declined to do DNA tests on Lincoln artifacts.

Grove points out that while such material could shed light on history or answer claims of descent, it could also lead to commercialization, perhaps through sales of jewelry or other items embedded with famous DNA.

And while it may be hard to say what Lincoln would have wanted, the opinion of his surviving son seems clear. After repeated moves of Lincoln’s remains, as well as an 1876 plot to rob Lincoln’s grave, Robert Lincoln had his father’s remains interred underground in 1901 in a steel cage encased in concrete in Springfield, Ill., where they remain.

“There,” Grove said, “we probably have the closest thing of someone saying, from the family point of view, ‘Hey, let’s not do this.'”
___