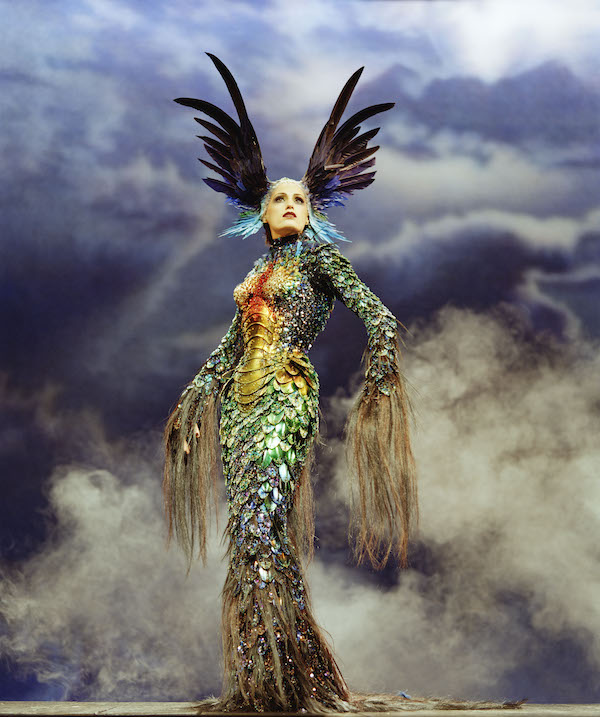 Organized by the Montreal Museum of Fine Arts, Thierry Mugler: Couturissime has been adapted for the Brooklyn Museum by Thierry-Maxime Loriot, curator of the exhibition, and Matthew Yokobosky, senior curator of fashion and material culture at the Brooklyn Museum. Showcasing nearly 130 outfits, most on view for the first time, the exhibition will also include accessories, videos, photographs, sketches and a special gallery dedicated to fragrances. Already seen by more than one million visitors in Canada, Germany, the Netherlands and France since its launch in 2019, the exhibition concludes its tour in Brooklyn. 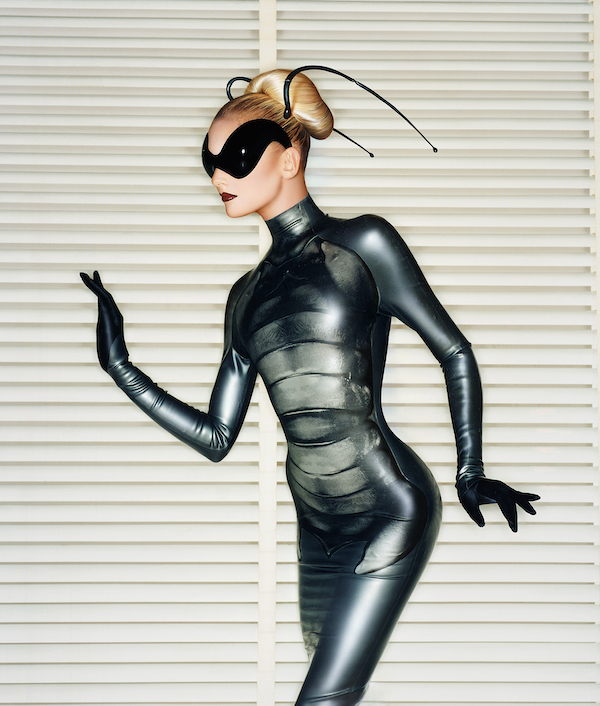 A fashion visionary, Mugler established himself as one of the most daring and innovative designers of the late 20th century. In the 1970s, Mugler defined trends by creating his acclaimed “glamazon” (a conflation of the words “glamour” and “Amazon”), a chic, modern woman whose style evolved from the flower power, hippie fashions of the 1960s. Throughout Mugler’s career, his bold silhouettes and use of avant-garde fabrication techniques and materials — including glass, Plexiglas, PVC, faux fur, vinyl, latex and chrome — made their mark on fashion history. In the 1980s and ’90s, he galvanized the renaissance of haute couture through his provocative collections and theatrical fashion shows, which involved grandiose locations and the era’s most acclaimed models. To this day, his work continues to influence new generations of couturiers. 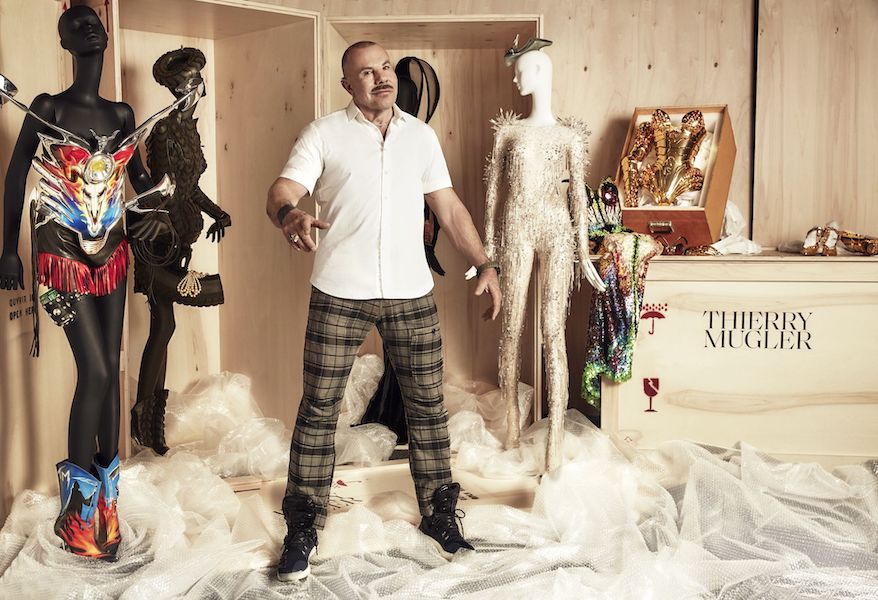 Mugler’s sensational presentations and sleek aesthetic have been immortalized through his direction and designs for George Michael’s music video Too Funky (released in 1992) and his costume designs for Cirque du Soleil (Zumanity, 2003) and Beyonce’s acclaimed world tour I Am . . . (2009). Celebrities continue to be drawn to Mugler’s designs: his classic gowns have recently been worn by Beyonce, Cardi B and Kim Kardashian. Thierry Mugler: Couturissime is an opportunity to discover and rediscover the fantastical work of an artist, couturier, director, photographer and perfumer who revolutionized the world of fashion.

The exhibition is organized thematically, highlighting Mugler’s interests in fantasy, glamour, science fiction, eroticism and the natural world. Displayed in the Brooklyn Museum’s Morris A. and Meyer Schapiro Wing and Iris and B. Gerald Cantor Gallery, the exhibition opens with a life-size 3-D hologram, made by Quebec artist Michel Lemieux (Lemieux Pilon 4D Art). The projection brings to life Mugler’s designs for a theatrical production of La Tragedie de Macbeth, presented by the Comedie-Francaise at the 1985 Festival d’Avignon. 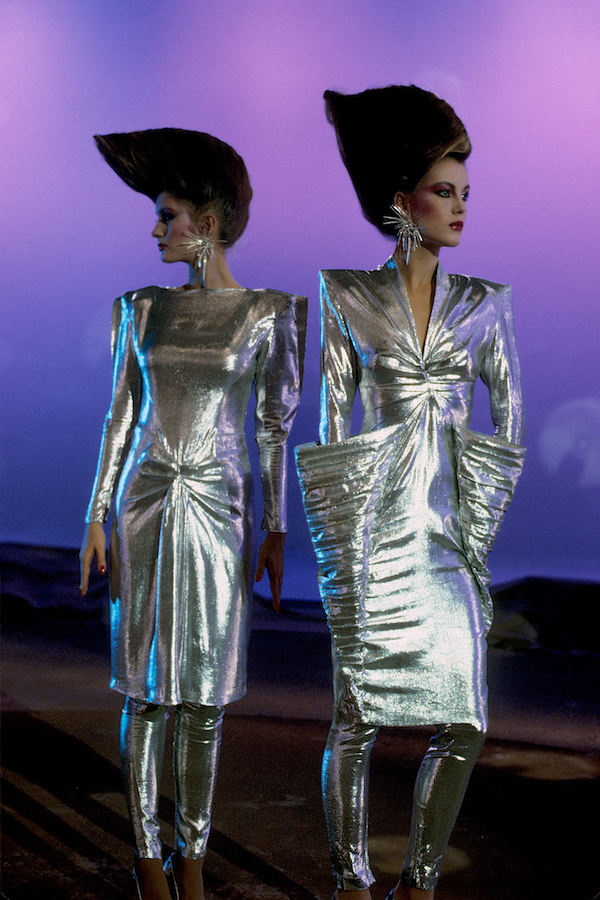 The Brooklyn Museum presentation also includes a gallery dedicated to fragrance, with a new section celebrating the 30th anniversary of Mugler’s trailblazing scent Angel. Mugler distinguished himself in the world of modern perfumes with this 1992 release. The fragrance’s inclusion of ethyl maltol, a compound used in the food industry to lend a sugary taste to sweets, started an olfactory revolution that launched a new perfume category: gourmand. Angel is displayed alongside Mugler’s later fragrance creations Alien, A*men, Aura and Womanity.

Couturissime also explores the significance of fashion photography, with works by numerous artists and Mugler collaborators including Lillian Bassman, Guy Bourdin, David LaChapelle, Karl Lagerfeld, Sarah Moon, Pierre et Gilles, Herb Ritts and Ellen von Unwerth. Mugler himself became a prominent fashion photographer in the 1970s, shooting his own advertising campaigns. He played on the glamour and beauty of his muses, from Jerry Hall to Iman, in extreme locations such as Greenland, the Sahara, the roof of the Paris Opera, and atop the famed eagles on the 61st floor of New York City’s Chrysler Building. 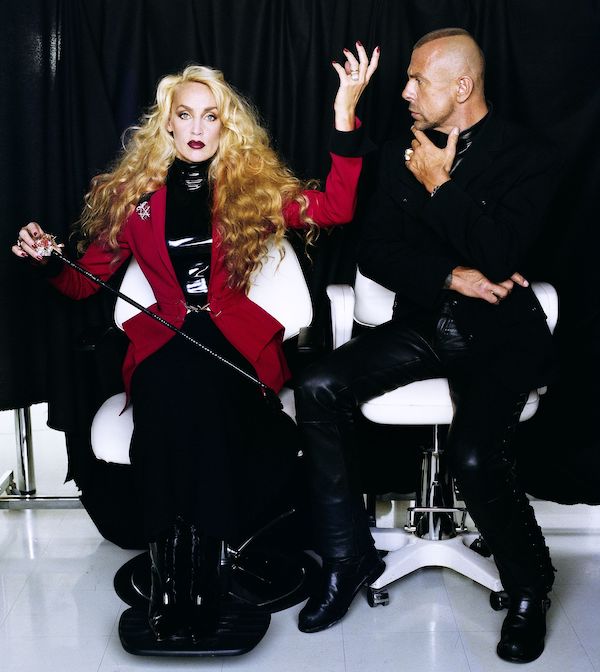 The exhibition also highlights the lifelong collaboration between Thierry Mugler and photographer Helmut Newton. Twenty-three of Newton’s photographs are on view, including images that feature Mugler’s important collection Lingerie Revisited, Fall/Winter 1998–99, and the models Carla Bruni and Kristen McMenamy.

Mugler’s interest in futurism and his distinctive aesthetic known as “fembot couture” are showcased in galleries designed by Berlin artist and set designer Philipp Furhofer. Mugler took inspiration from a variety of sources, such as science fiction and comic-book superheroines, medieval armor and uniforms, and industrial design and futuristic vehicles. He playfully devised detachable or “convertible” sheath gowns, “fender” bustiers, “radiator” belts and a “tail fin” bag. He collaborated with Jean-Pierre Delcros, an aircraft bodywork specialist, and Jean-Jacques Urcun, an artist, to create robotic humans seemingly poured into chrome bustiers and Plexiglas catsuits. 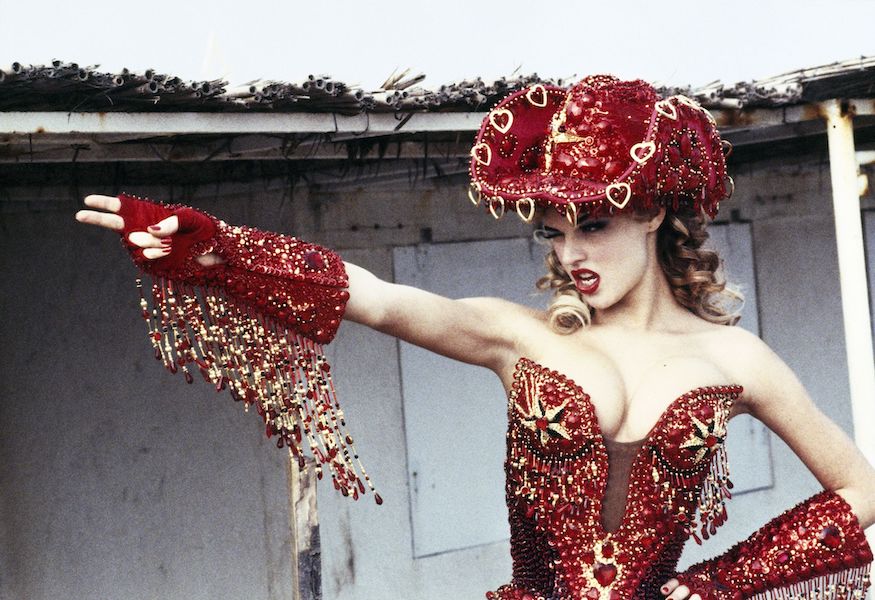 Mugler’s all-time masterpiece, Maschinenmensch, presented in 1995 at his 20th-anniversary show, is a fully articulated robotic armor suit that required six months of intensive work to fabricate. The suit pays tribute to the character of Futura from the dystopian novel Metropolis (1925), famously visualized in the eponymous 1927 film by Fritz Lang.

In 1991, Mugler’s talents extended into music and film when he directed the music video for George Michael’s song Too Funky, which has gone on to become an MTV and YouTube classic. As explored in a dedicated gallery, the video’s costumes were worn by top models of the day, including Tyra Banks, Linda Evangelista, Connie Girl, Eva Herzigova, Estelle Lefebure and Emma Sjoberg, as well as performer Joey Arias and actor Julie Newmar, the original Catwoman. 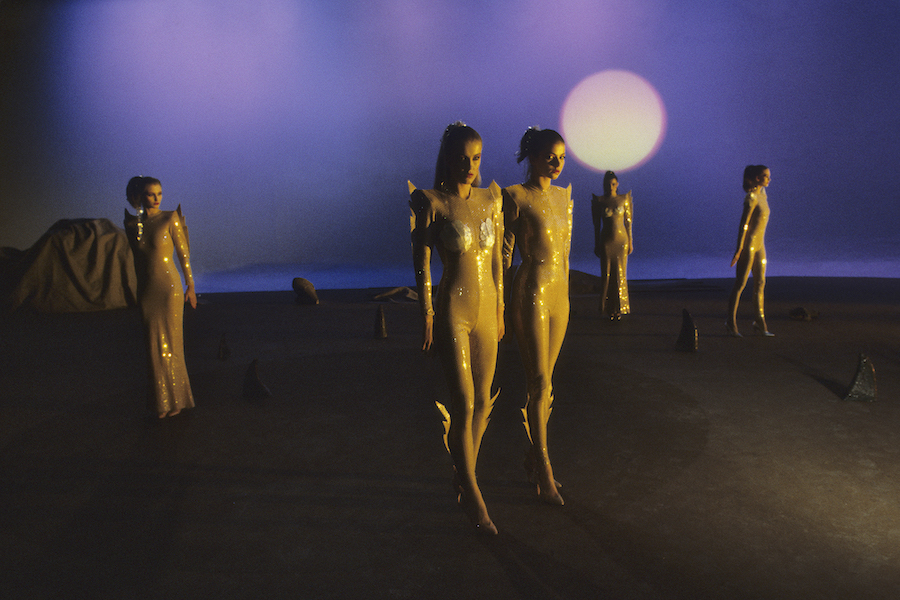 In the Metamorphosis section of the exhibition, an immersive installation by Montreal studio Rodeo FX (which has developed special effects for such productions as Dune, Game of Thrones, and Stranger Things) highlights flamboyant silhouettes from Mugler’s Les Insectes and La Chimere collections of 1997–98, featuring steep shoulders, plunging decolletes and hourglass waistlines. The centerpiece design is a black velvet sheath and train, adorned with butterfly wings made of feathers created by plumassier Maison Lemarie. Another dress features iridescent scales and is embroidered with crystals, costume diamonds, feathers and horsehair, a culmination of the extravagance of Mugler’s couture imagination. Metamorphosis also includes nymphs donning scalloped glass-and-shell bustiers, posed alongside organza jellyfish that evoke the imagery of Jules Verne’s 19th-century science-fiction novel Twenty Thousand Leagues under the Seas — but with a modern twist.

Thierry Mugler: Couturissime was initiated, produced and circulated by the Montreal Museum of Fine Arts, in collaboration with the Maison Mugler.

Visit the website of the Brooklyn Museum and see its dedicated page for Thierry Mugler: Couturissime.