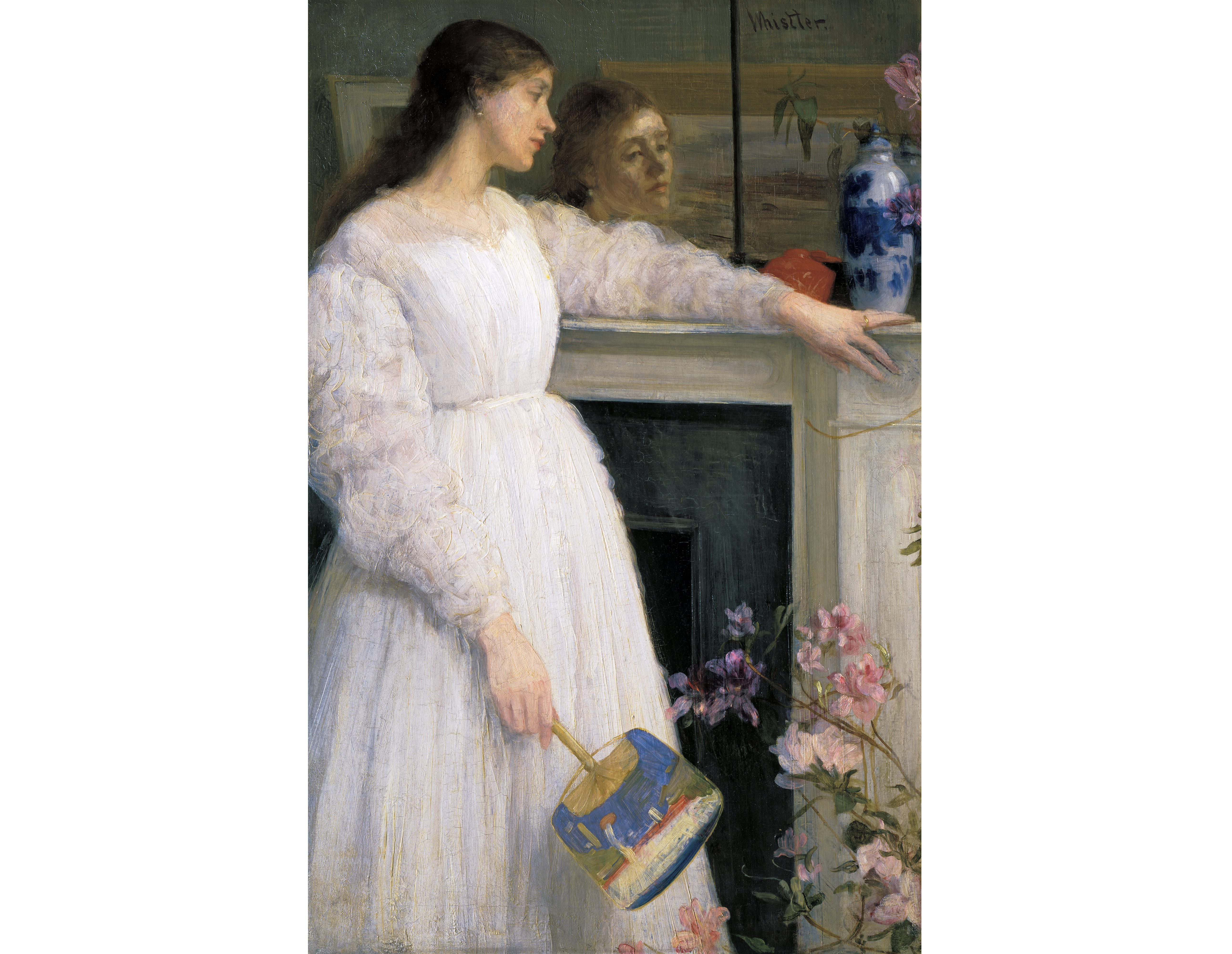 WASHINGTON, DC — When James McNeill Whistler (1834–1903) and Joanna Hiffernan (1839–1886) met in 1860, they began a close professional and personal relationship that lasted for more than two decades. Featuring some 60 works including paintings, drawing and prints, The Woman in White: Joanna Hiffernan and James McNeill Whistler explores their partnership and the iconic works of art arising from their collaboration. Bringing together nearly every known depiction of Hiffernan, as well as relevant documents and letters, this exhibition explores who Hiffernan was, her partnership with Whistler, and her role in the creative process. The Woman in White is on view at the National Gallery of Art in Washington, D.C., from July 3 through October 10 in its East Building.

Baptized in Limerick, Ireland, Joanna Hiffernan immigrated to London with her parents and siblings — where, as Irish Catholics, they experienced poverty and social prejudice in a class-bound society. When they met in 1860, Hiffernan not only became Whistler’s primary model but also helped manage his studio and financial affairs. In 1866, Whistler gave her power of attorney and made her his sole heir in his will. In 1870, after Whistler fathered a child with Louisa Fanny Hanson, Hiffernan and her sister Agnes Singleton raised the boy, Charles (“Charlie”) James Whistler Hanson. The child became the primary connection between Hiffernan and Whistler through the 1870s and into the 1880s. In 1886, Hiffernan died of bronchitis after lifelong respiratory problems that may have been exacerbated by her earlier exposure to toxic art materials while working in the studio. 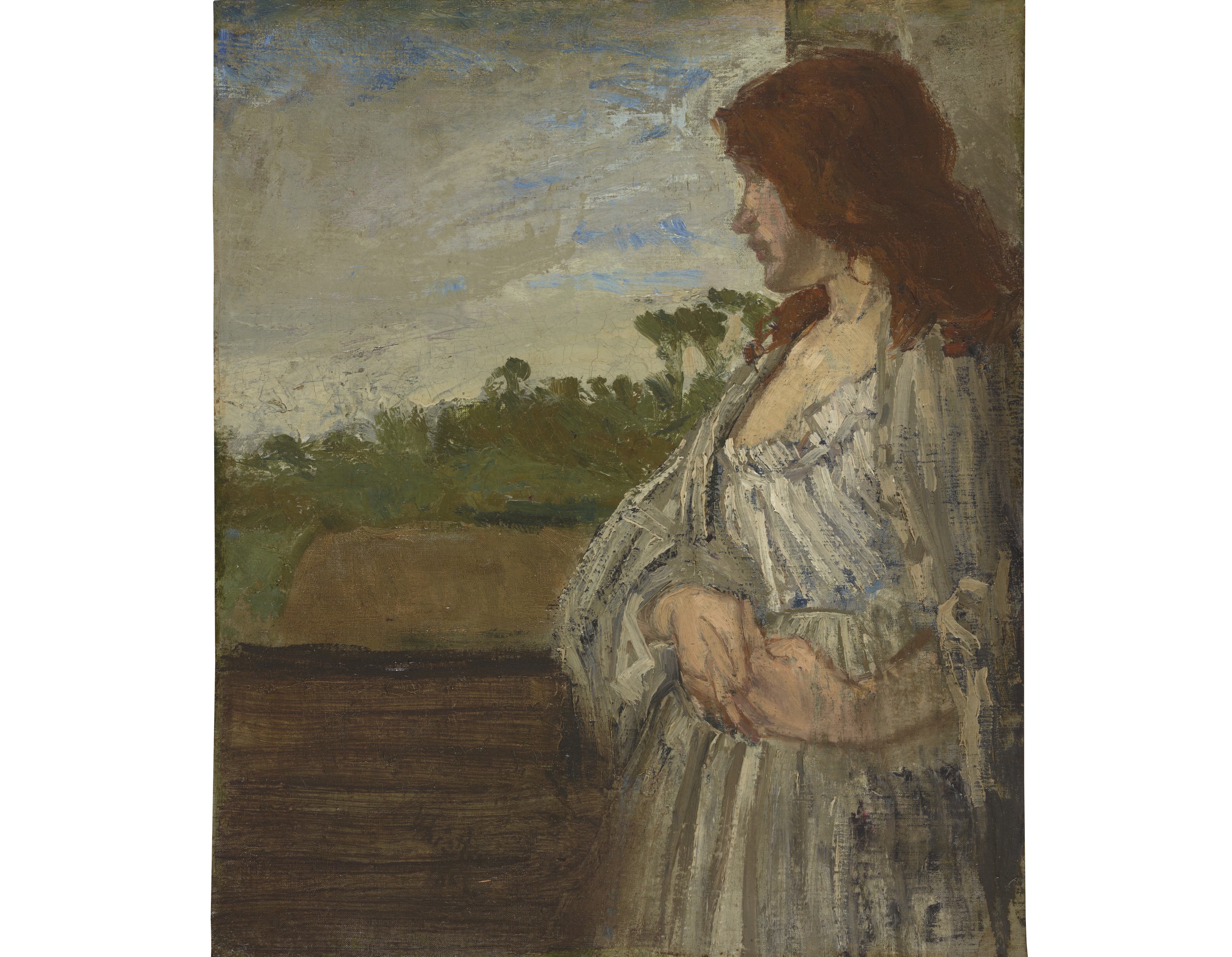 Despite all the records, letters and works of art that document Hiffernan’s life, much remains to be discovered. Personal correspondence is rare, and no photographs of Hiffernan or works of art by her have yet been found. Presenting what is known, the exhibition invites visitors to participate in recovering Hiffernan’s humanity by considering the essential mystery of who she was.

“This is the first exhibition to delve deeply into how these exquisite depictions of Joanna Hiffernan were made, what they mean, who Hiffernan was, as well as the broader influence and resonance of Hiffernan’s collaboration with Whistler for Victorian culture in the late 19th century,” said Kaywin Feldman, director of the National Gallery of Art. “We are deeply grateful to Professor Margaret F. MacDonald, the preeminent authority on Whistler’s art and life, for graciously agreeing to guest-curate this presentation in collaboration with Ann Dumas and Charles Brock. I would like to extend our thanks to our lenders for their willingness to share their treasured works of art and to the Terra Foundation for American Art for their support of the exhibition and its accompanying book.” 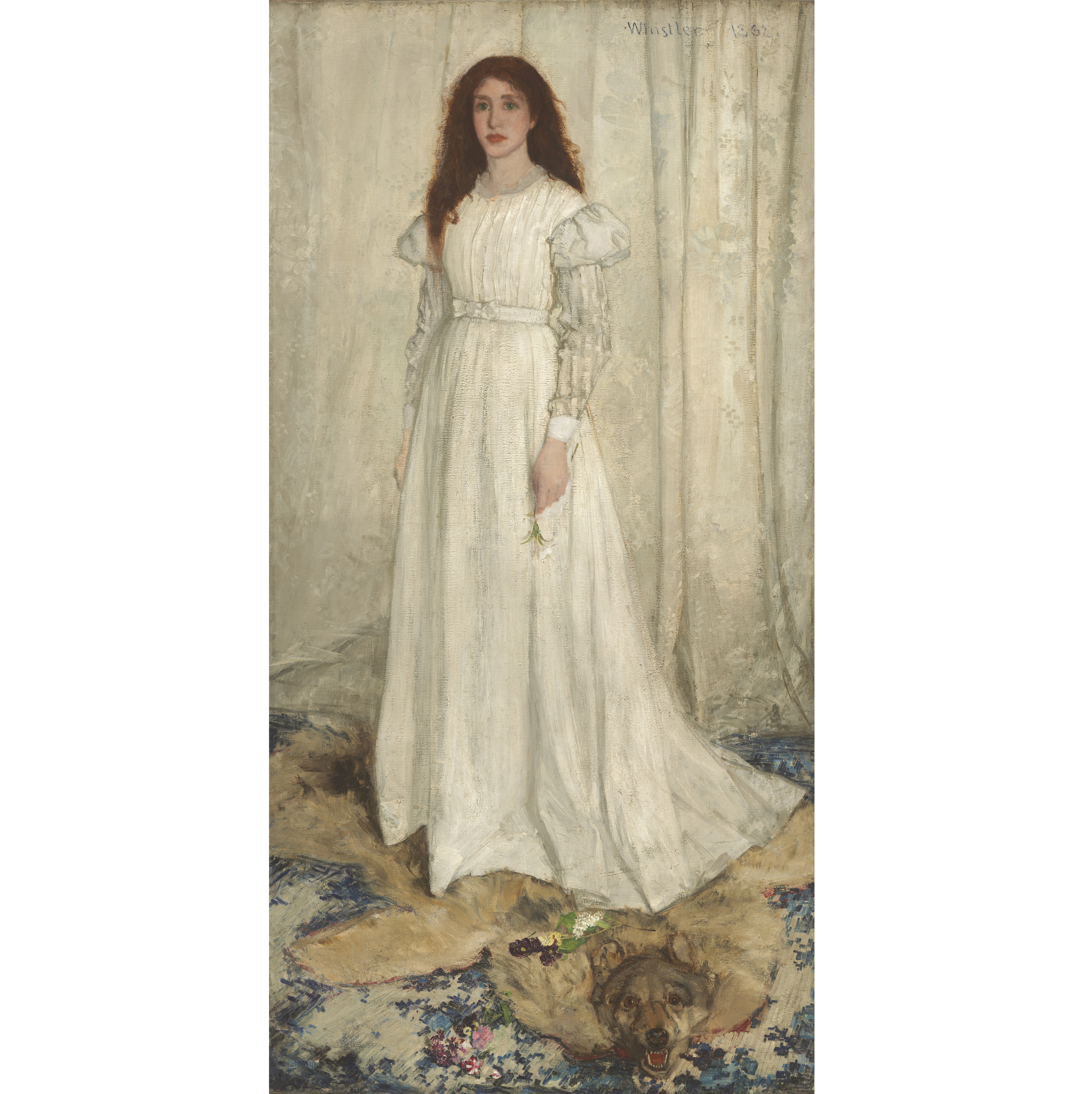 Symphony in White, No. 1: The White Girl (1861–1863), one of the National Gallery’s most famous and popular works, is presented together with Whistler’s second and third “Symphony in White” paintings, for the first time in the United States. Featuring an anonymous subject — who we identify as Joanna Hiffernan, an Irish Catholic woman with little or no status in British society — these works shifted the essence of modern art from sentimental storytelling and stark realism toward abstraction: viewers were left to speculate about who the striking model might be.

In addition to these visual “symphonies,” the first gallery of the exhibition showcases Hiffernan in a variety of other roles and settings, ranging from gritty, working-class surroundings (Wapping (1860–1864), named for a district by the River Thames in London) to exquisitely arranged interiors where she is surrounded by beautiful examples of textiles, pottery and prints from Whistler’s extensive collections of Asian art. 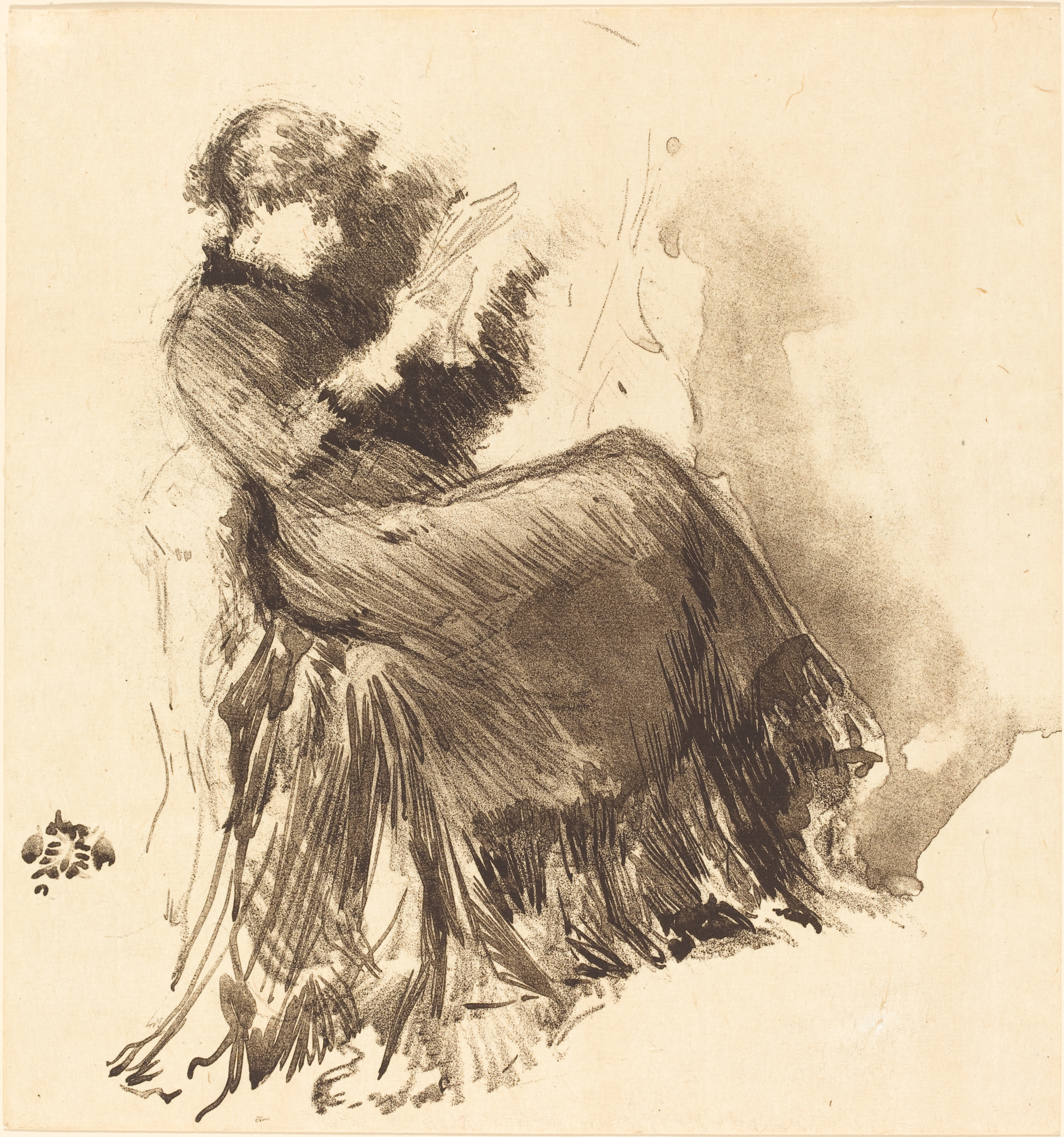 In the second gallery, etchings and drawings portray Hiffernan as Whistler would have encountered her in the shared spaces of their studio and home in London. The intimate scale of these works on paper — originally intended to be handheld — amplify the personal, psychological dimensions of the pair’s relationship. Notable works include two striking drypoints: Jo (1861) and Weary (1863). 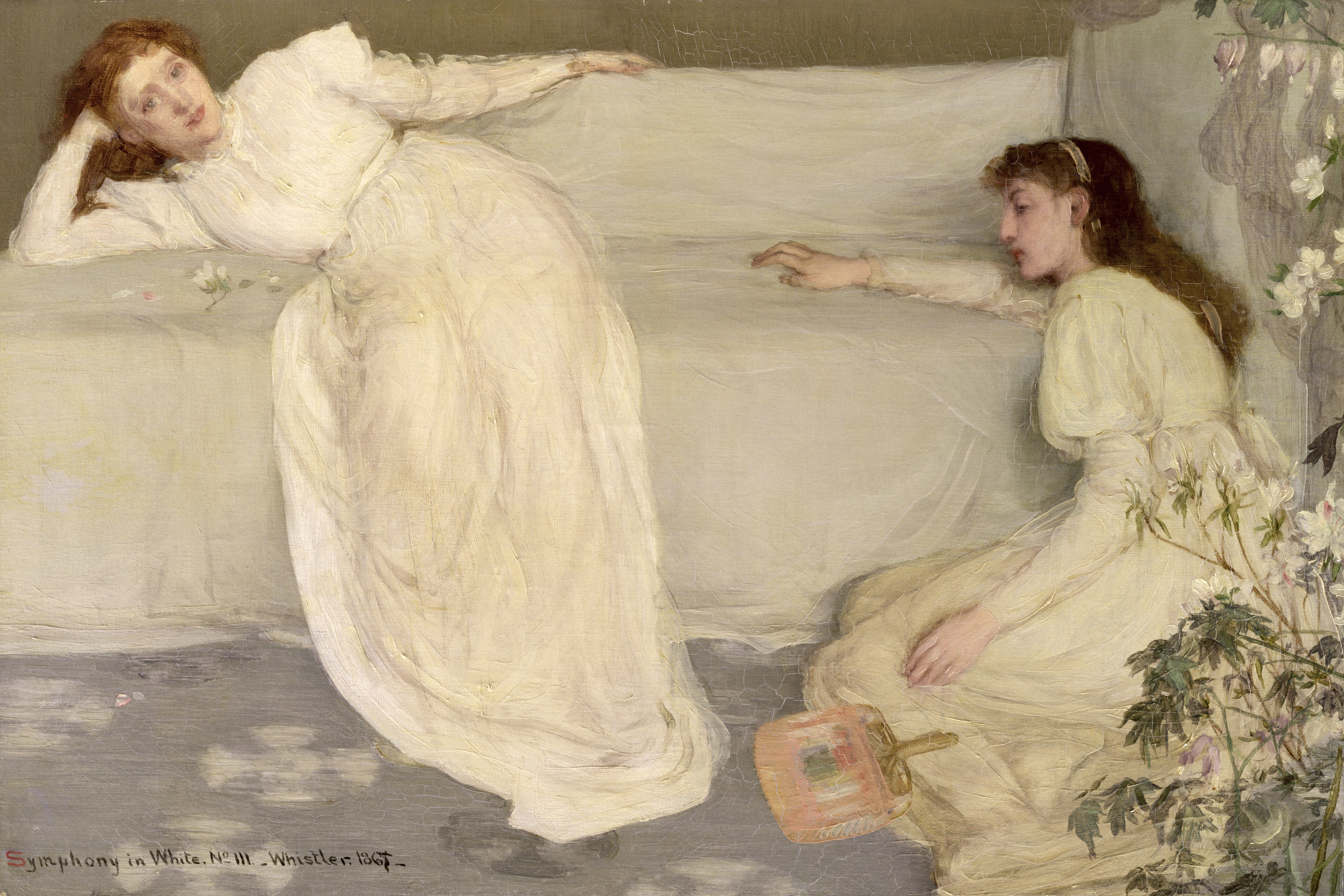 The paintings of women dressed in white in the third gallery were made during the Victorian era by European and American artists who either influenced, or were themselves directly inspired by, Hiffernan and Whistler’s most significant and controversial collaboration, Symphony in White, No 1: The White Girl. This gallery highlights not only how other artists incorporated the technical challenges of painting white in their work, but also some of the broader cultural associations that the color held for Victorian audiences, from fashion and spiritualism to perceptions of gender and race. Among the works featured here are significant paintings by John Singer Sargent (1856–1925), Dante Gabriel Rossetti (1828–1882), and John Everett Millais (1829–1896). Symphonie in blanc (1908) by Andree Karpeles (1885–1956) stands out as the sole portrait of a “woman in white” painted by a woman in this exhibition, and is a particularly striking example of the pervasive influence of Whistler’s “Symphony in White” paintings.

The last gallery of the exhibition returns to the history of Hiffernan and Whistler’s partnership. It includes three portraits of Hiffernan by Gustave Courbet (1819–1877), from when the three spent time together in the seaside village of Trouville, France in the fall of 1865. Also on view is a series of illustrations that Whistler and Hiffernan undertook in 1862. Featured in the popular periodicals Good Words and Once a Week, Hiffernan takes on various roles — a cotton-mill worker, a tapestry weaver, a nun — posed as if in moments of anguish, doubt or peaceful introspection. These images suggest affinities between Hiffernan’s own experience and the plight of the women she portrays.

In addition to the works of art, letters and documents presented in the final gallery shed light on the complex personal relationship between Whistler and Hiffernan. We see depictions of Hiffernan’s sisters Agnes and Ellen, Whistler’s son Charles — and the woman who supplanted Hiffernan as Whistler’s chief model, Maud Franklin. Among the documents on view are letters from Whistler to Hiffernan, a legal document granting her power of attorney, and Whistler’s will designating her as his sole heir — items that illuminate the key role Hiffernan played in their unconventional yet enduring partnership.

Visit the website of the National Gallery of Art and see its dedicated page for The Woman in White: Joanna Hiffernan and James McNeill Whistler. 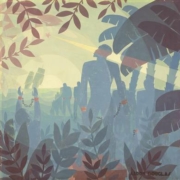 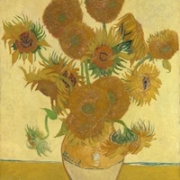 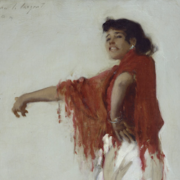