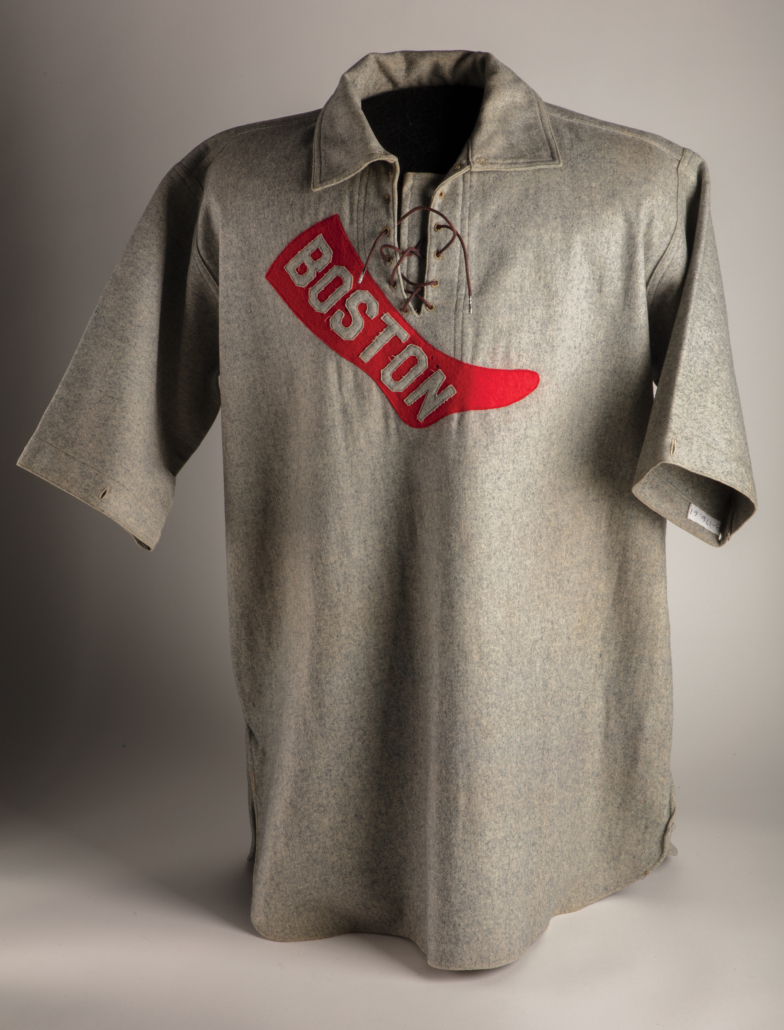 WORCESTER, Mass. – During the course of 170 years, the baseball jersey has become an iconic emblem of American culture, extending well beyond a sports uniform to inspire fashion trends and serve as a means of everyday, individual self-expression. While the ubiquity of the American baseball shirt is undeniable, there has been little scholarly research on its importance to material and popular culture through time. On June 12, the Worcester Art Museum (WAM) opened The Iconic Jersey: Baseball x Fashion, the first museum exhibition to focus specifically on the design evolution of baseball jerseys and their impact on wider national culture. The show will feature 37 garments, including historic and contemporary jerseys as well as runway looks—from Jesse Tannehill’s 1908 Boston Red Sox Uniform Shirt to MIZIZI’s Black Lives Matter jersey—along with two one-of-a-kind jersey chairs and other ephemera that capture the phenomenon of the baseball shirt, both on and off the field. The exhibition, which will remain on view through September 12, 2021, is accompanied by a scholarly catalog.

The Iconic Jersey exhibit coincides with and celebrates the construction of a new baseball stadium, Polar Park, in Worcester’s Canal District — just a short distance from the Museum — and the arrival of the Boston Red Sox’s Triple-A affiliate to the city — the Worcester Red Sox, or “Woo Sox.” Worcester has a long and storied history with baseball, and the upcoming exhibition offers a singular opportunity to explore the sport’s most recognizable symbol as a work of art and design in its own right — and in doing so further collapse perceived boundaries between fine art and everyday objects.

“The long history of the baseball jersey taps into a profound set of human desires, to belong, and to be proud in proclaiming that affiliation whether as a player or a fan,” said Matthias Waschek, the Jean and Myles McDonough Director of the Worcester Art Museum. “But the jersey has not been a static item. Over the years it has changed and evolved, has sought to pick up on fashion trends or to reject them, and both designers and fans have, in turn, brought their own influences to bear. Now, for the first time, we can explore this history in a systematic way.”

The exhibition, which is organized by Erin R. Corrales-Diaz, Ph.D., WAM’s curator of American art, takes a broad view of the baseball jersey, illuminating equally its relationships to aesthetics and athletics and to collective and individual expression. To orient the viewer within these different themes, The Iconic Jersey is divided into three major sections, including “The Modern Jersey,” which traces the evolution of aesthetic choices such as fabrics, typography, colors, and patterns; “Experimental Design,” which examines sartorial decisions that deviate from the traditional jersey shape; and “Off the Field,” which explores the jersey as the ultimate articulation of fandom and its emergence in both luxury design and streetwear.

“The Iconic Jersey takes the ‘formal’ language and concepts that we typically apply to individual works of art and, by applying it to baseball jerseys, makes it possible to bring forward new ideas and ways of looking at an article of clothing many people take for granted,” said Corrales-Diaz. “All of these jerseys, whether made for players or for fans, reveal an extensive design process in which a designer considers fabrics, fit, shape, colors, markings, and logos. When we choose to put one on, we do more than just affiliate ourselves with our chosen team. We are also embracing design, a set of aesthetic choices that help to define who we are and how we look at the world.” 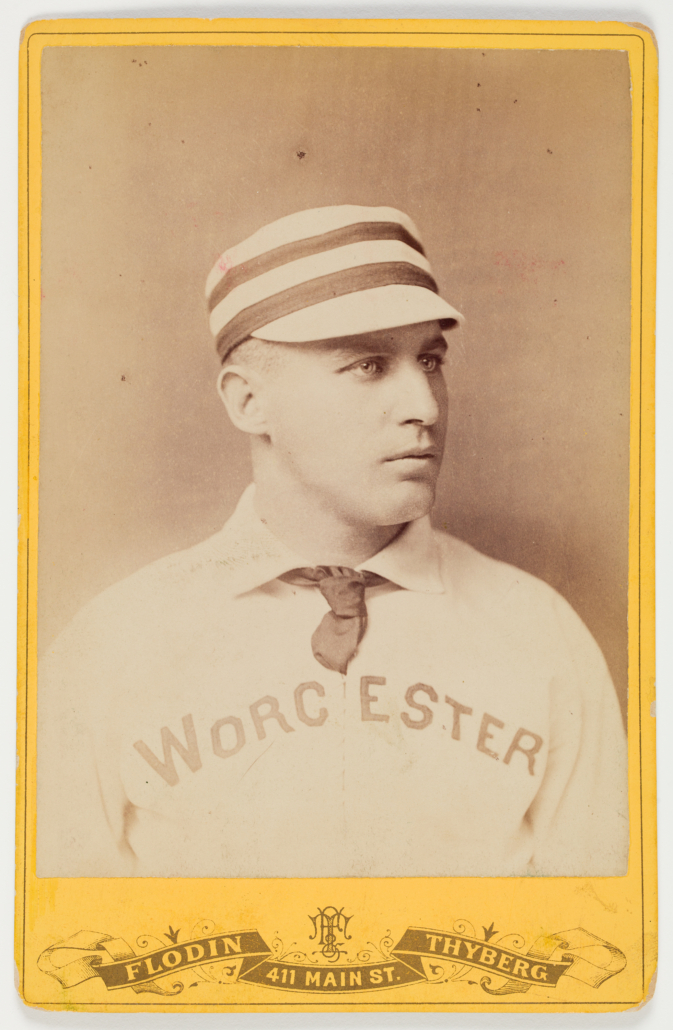 The New York Knickerbockers adopted the first baseball uniform in 1849. Seeking to professionalize and add credibility to the sport, other teams soon followed in developing uniform and dress parameters for their ball teams—most often inspired by volunteer fire and militia companies. Far from our modern conception of baseball style, this first uniform is described as featuring blue woven pantaloons, a white flannel shirt, and straw hat. This section of the exhibition traces the aesthetic evolution of the jersey from these early styles to the more casual and collarless look we understand today. The exhibition pays attention to both major changes in fit and fabric brought on by technological advances to the small shifts in graphic elements, logos, and colors, highlighting the importance of these developments to capturing team identity. 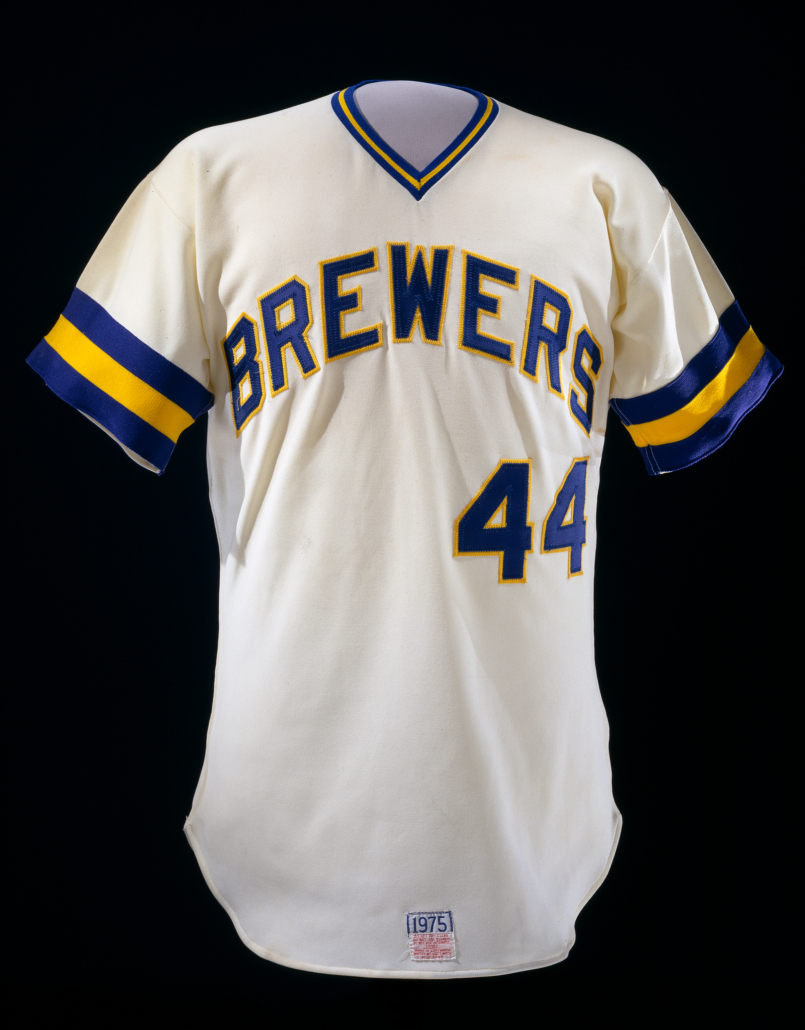 Among the highlights in this section are early design pamphlets and guides for sporting manufacturers, including never before exhibited items from the R. J. Liebe Athletic Lettering Company, who began creating their elaborate, circular chain-stitched lettering in 1923, and who continue to provide lettering and other materials for major manufacturers’ uniforms. Also included are a wide range of jerseys spanning early examples as a 1908 Boston Red Sox Uniform Shirt worn by Jesse Tannehill and a 1909 Chicago Cubs Uniform shirt worn by Johnny Kling through to contemporary jersey designs that look to the future of innovation. 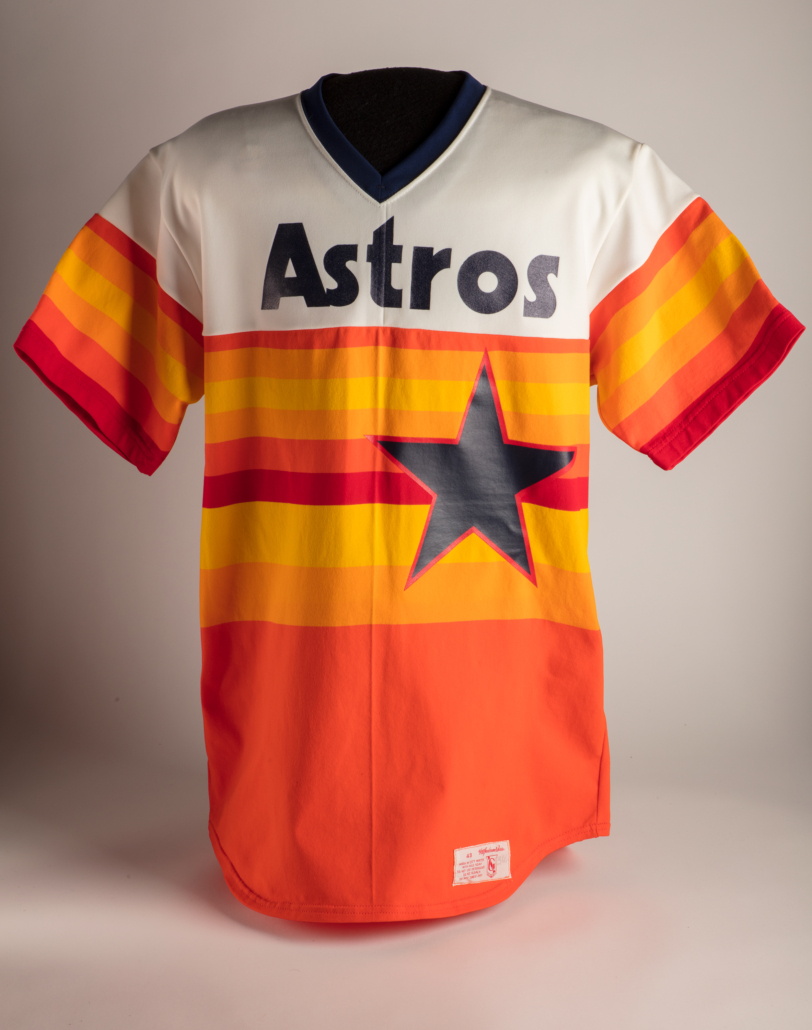 While the classic button-down jersey is recognized as the quintessential look of baseball, there have been many moments of inspiration and innovation within jersey design across its 170-year history. This includes fanciful and unorthodox ideas such as satin jerseys, sleeveless shirts, and the incorporation of rainbow colors to designate player positions that were quickly discarded by teams and fans alike. In this portion of the exhibition, audiences will be treated to an array of these unusual style decisions, with a particular focus on uniforms from between the 1970s and 1990s — particularly fertile decades for daring uniform design choices. 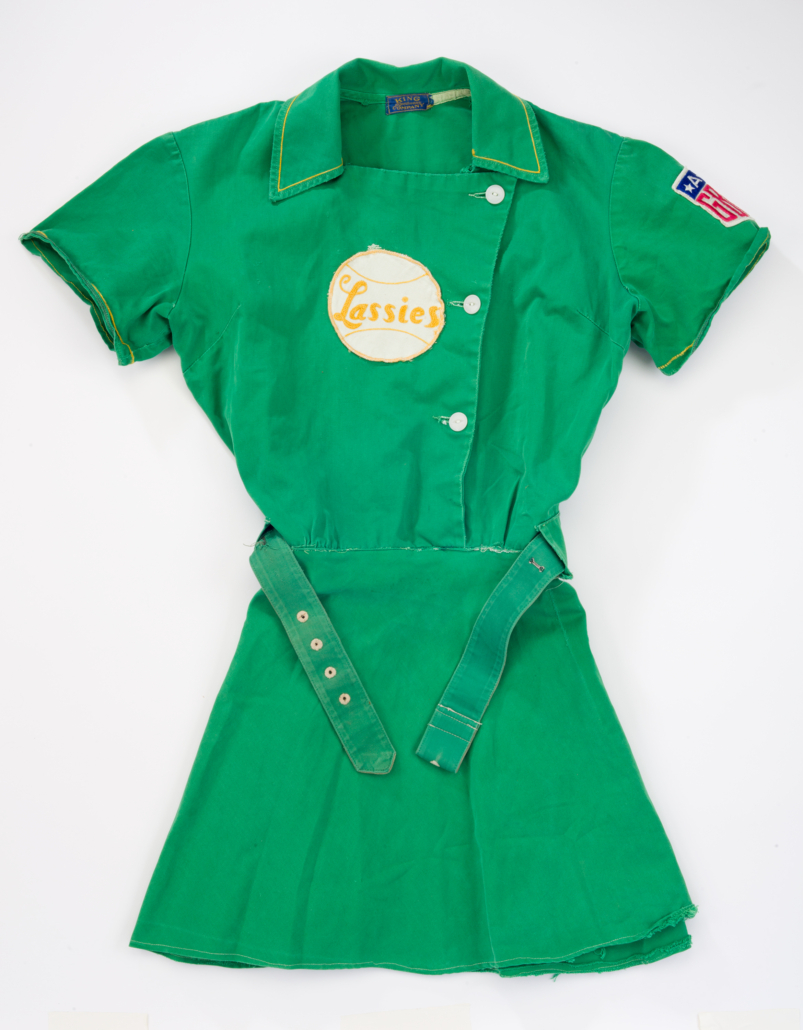 One iconic design from this period is the Houston Astros’ “rainbow” pullover, created not by fashion designers or even manufacturers, but by New York ad agency McCann Erickson, which was hired to rebrand the team and refresh its visibility, with a jersey of different colored stripes. Another highlight is an initiative introduced by the Seattle Mariners, titled “Turn Ahead the Clock,” which explored the jersey of 2027. The “Turn Ahead the Clock” jerseys were baggy and sleeveless and featured enlarged logos and new “techy” colors of metallic silver and maroon. The initiative proved popular and was later adopted as a League wide event, although the jerseys themselves were not used beyond promotional opportunities. Another, the 1950s uniform of Isabel “Lefty” Alvarez, a Cuban ballplayer who came to the United States and played for the Kalamazoo Lassies, shows how gender-specific design actually hindered performance by female players on the ball field. 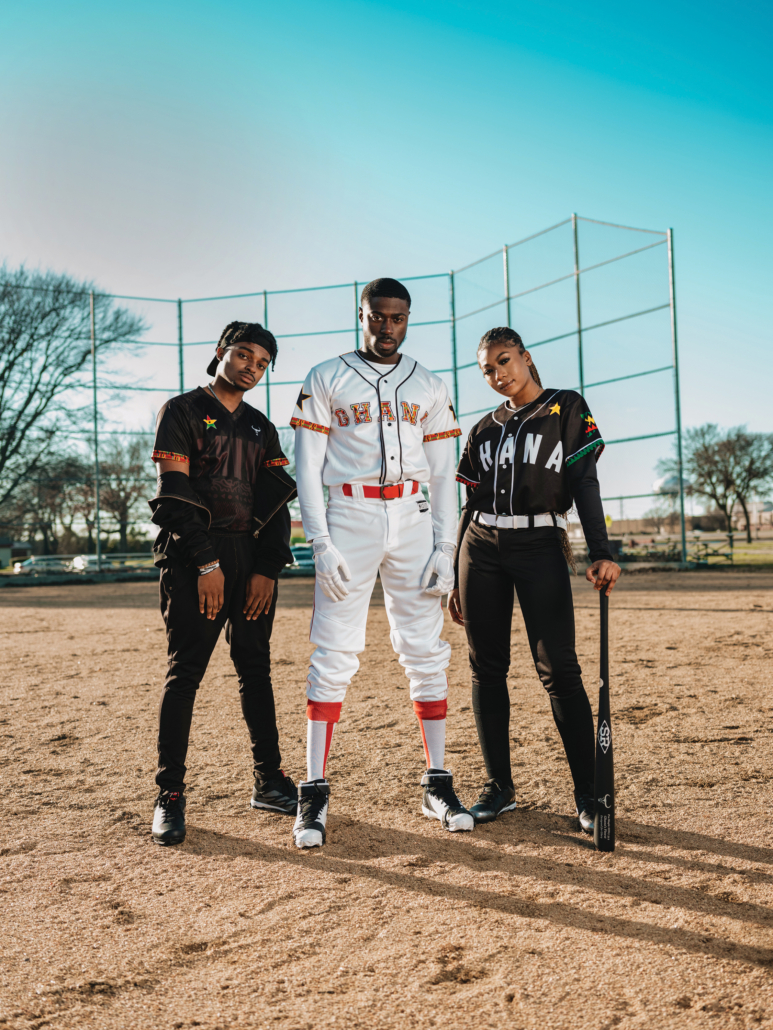 When fans began donning replicas of baseball jerseys in the 1970s, they transformed the shirt from athletic uniform to a symbol of both communal and personal expression. As replica jerseys grew in popularity among everyday fans, they were further adopted by celebrities and musicians, who gave the shirts heightened creative and cultural significance. This led to interest in jersey design from fashion houses such as Gucci, Dolce & Gabbana, and Moschino, among others. 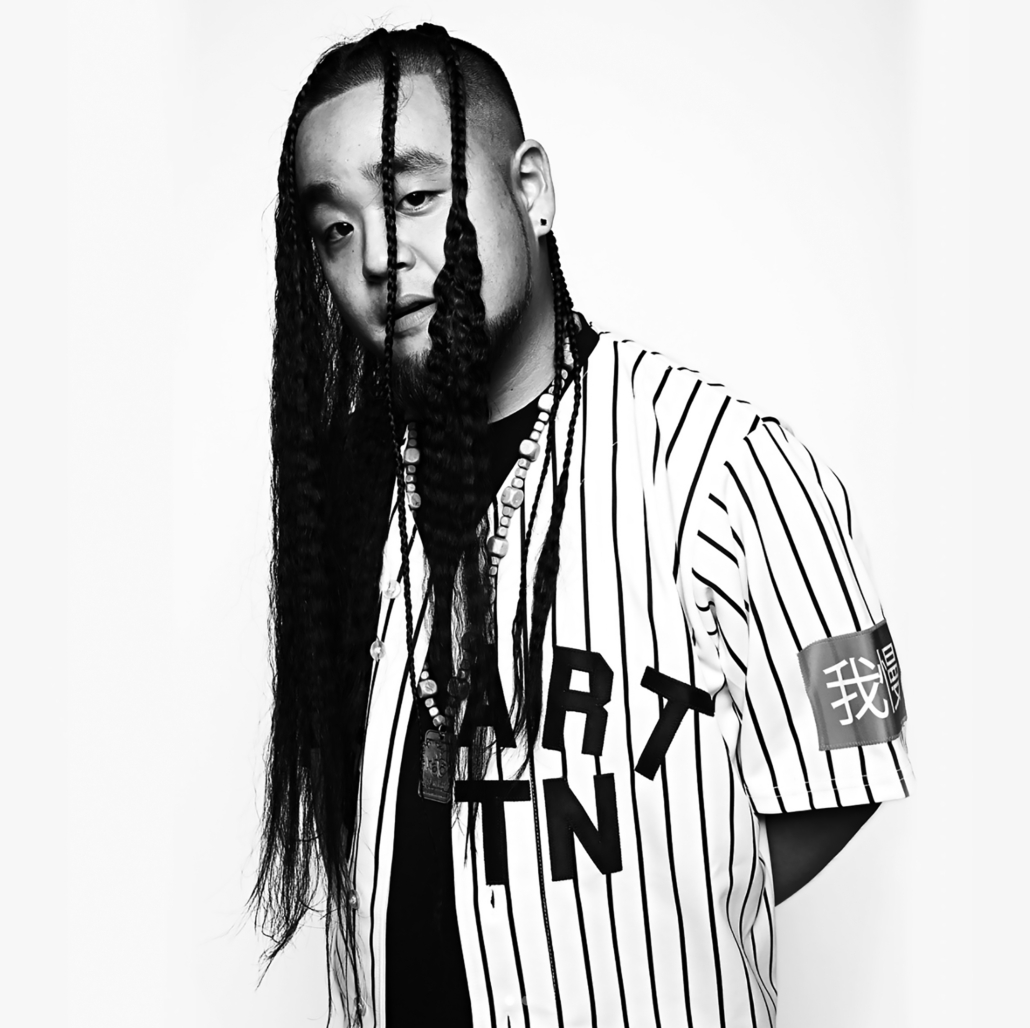 This section of the exhibition explores the life of the baseball jersey in popular and fashion culture. It pays particular attention to the important role that Hip Hop artists of the 1990s such as Ice Cube, Notorious B.I.G., and Outkast played in bringing the jersey to streetwear styles, opening the door to the jersey’s incorporation in mainstream fashion, as well as to significant collaborations between designers, artists, and activists within wider political and social movements. This includes Runaway x G Yamazawa, a 2017 collaboration on a jersey to honor the Japanese American ballplayers at the WWII incarceration camp Heart Mountain Relocation Center, and the creation of a Black Lives Matter jersey by MIZIZI, a streetwear brand representing the African diaspora that has been worn by protesters across the globe.

Visit the website for the Worcester Art Museum and see its dedicated page for The Iconic Jersey: Baseball x Fashion. 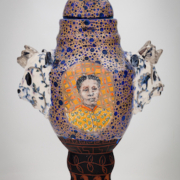 Worcester museum’s ‘Us Them We’ surveys socio-political landscape