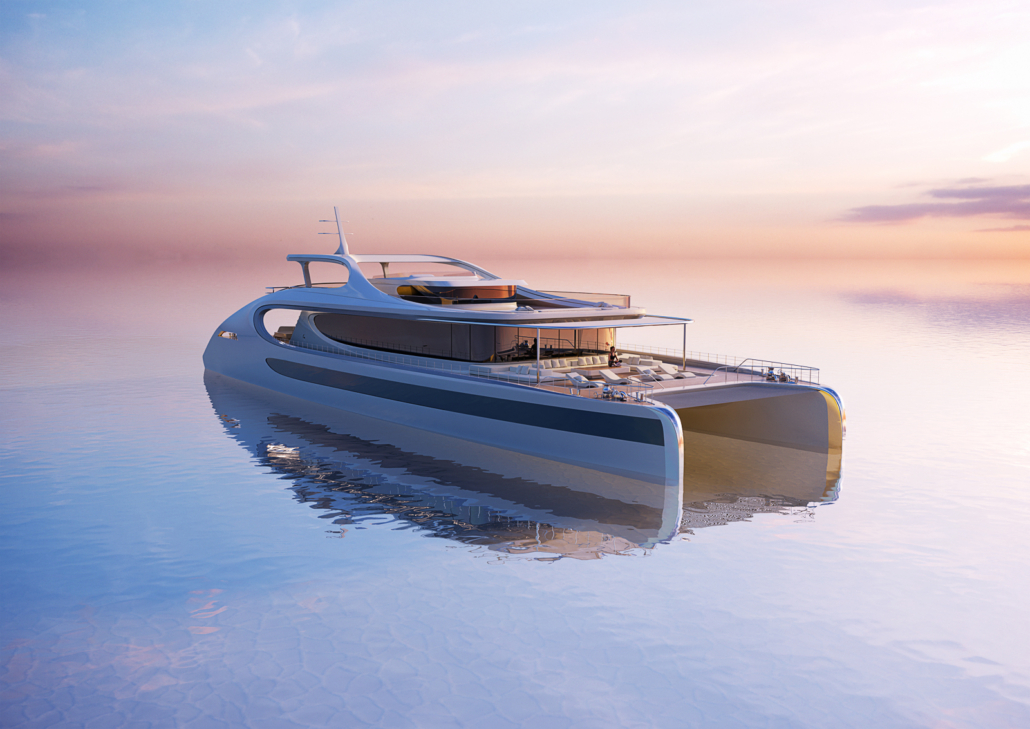 LONDON – The Italian shipyard Rossinavi, in collaboration with Zaha Hadid Architects (ZHA), together established a new era of sustainable yachting with Oneiric. Combining the signature of ZHA’s design with maximum functionality and cutting-edge technology, the Oneiric is designed and engineered without compromise, providing an unrivaled experience for the owner and guests while prioritizing the health of the ocean. The concept yacht was presented at Fuorisalone, an event that took place during Milan Design Week, which was held from June 6-12.

The Oneiric is a Rossinavi green-technology flagship. Three levels of solar panels are seamlessly integrated into the design to charge a highly efficient battery pack. An artificial intelligence-driven control center monitors energy consumption and battery status as well as observes the vessel’s environmental impact to advise the captain and crew on the most sustainable navigation. 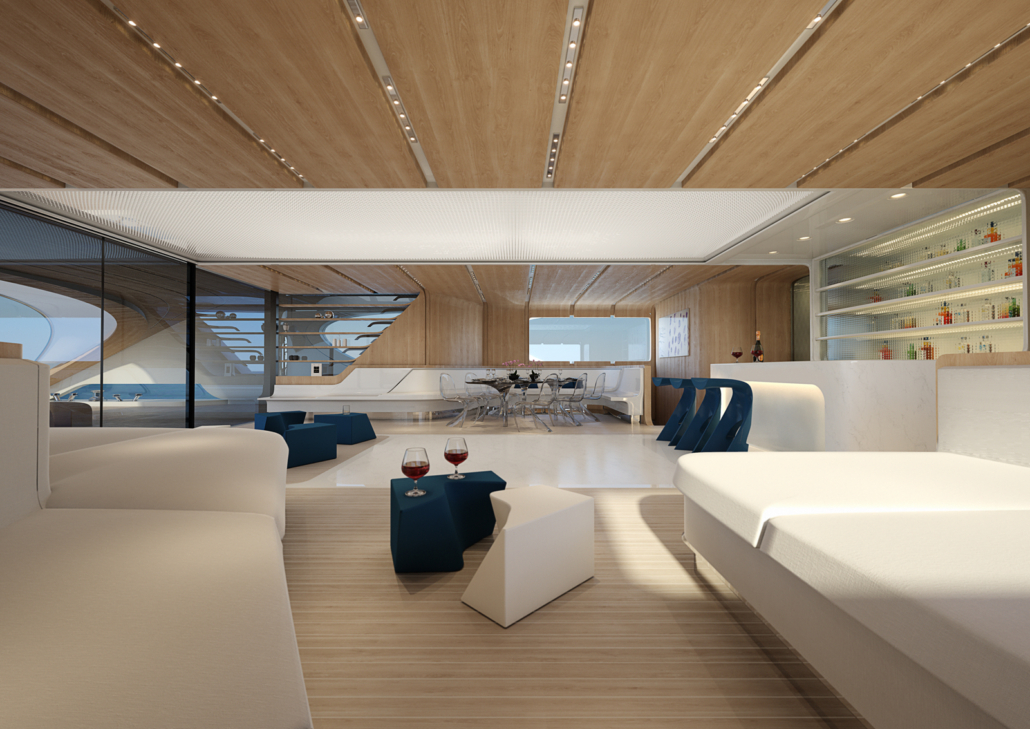 On a day trip, Oneiric can cruise up to 100% of the time in full-electric mode with zero emissions. On transatlantic crossings, the yacht can cruise in full-electric mode up to 70% of the time, saving approximately 40 tons of CO2 compared to a conventional vessel. The solar panels, which continually charge the battery pack during daylight hours, are also designed for the periods when the yacht is not in use and, when moored, it can power a family villa on land. 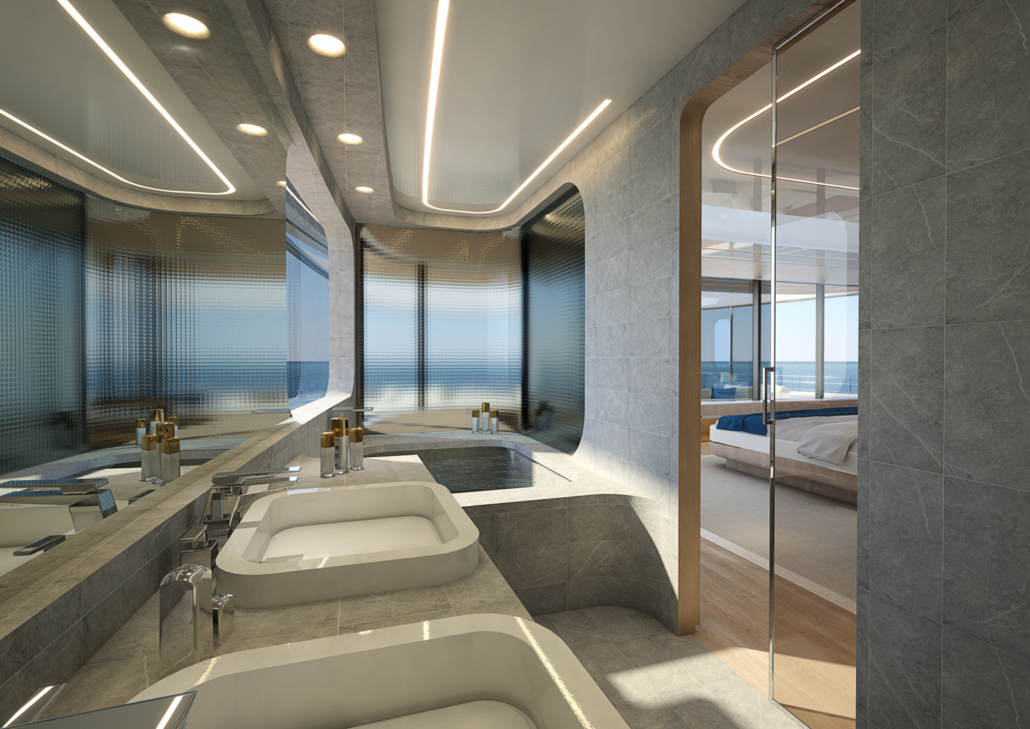 The Oneiric‘s multihulls are more energy-efficient than a conventional monohull yacht, due to their weight distribution and the hulls’ length-to-width ratio, which provides greater hydrodynamic efficiency.

This pursuit of environmental sustainability is driven by the desire to conserve the well-being of the ocean’s ecosystems. Rossinavi’s technological innovations and philosophy of sustainability are inspired by phytoplankton, a small marine algae that converts sunlight into energy and provides more than half of the Earth’s annual oxygen production. These billions of microscopic organisms remind us that, working together, we can all contribute to a healthier environment. 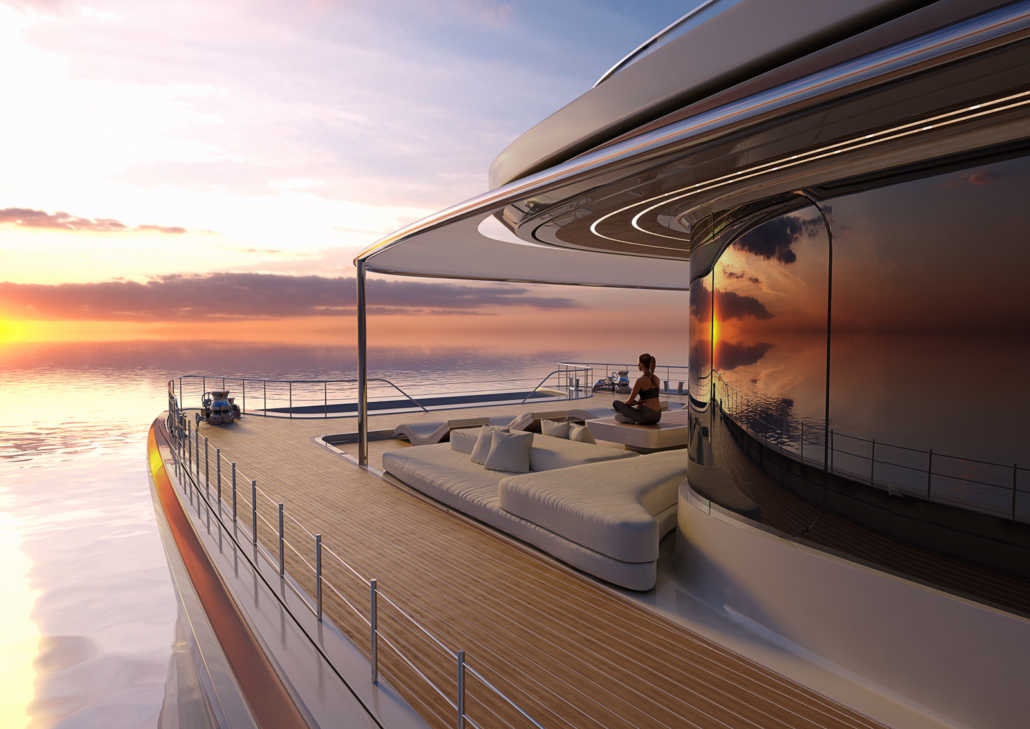 Rendering of an angle on an exterior deck of the Oneiric catamaran concept yacht. Art courtesy of ZHA

The design of Oneiric‘s exterior and interior is informed by the fluidity and dynamism of ocean waves. The sinuous lines and reflective surfaces of the yacht’s exterior are continued throughout the interior, blurring the boundaries between ship and sea.

The main deck cockpit is composed of a patio with walls and ceiling which are slightly curved to create a continuity that significantly opens the views to the water. Going down the stairs to the swim platforms, the area widens, shedding the walls and ceiling to give a direct connection with the sea. 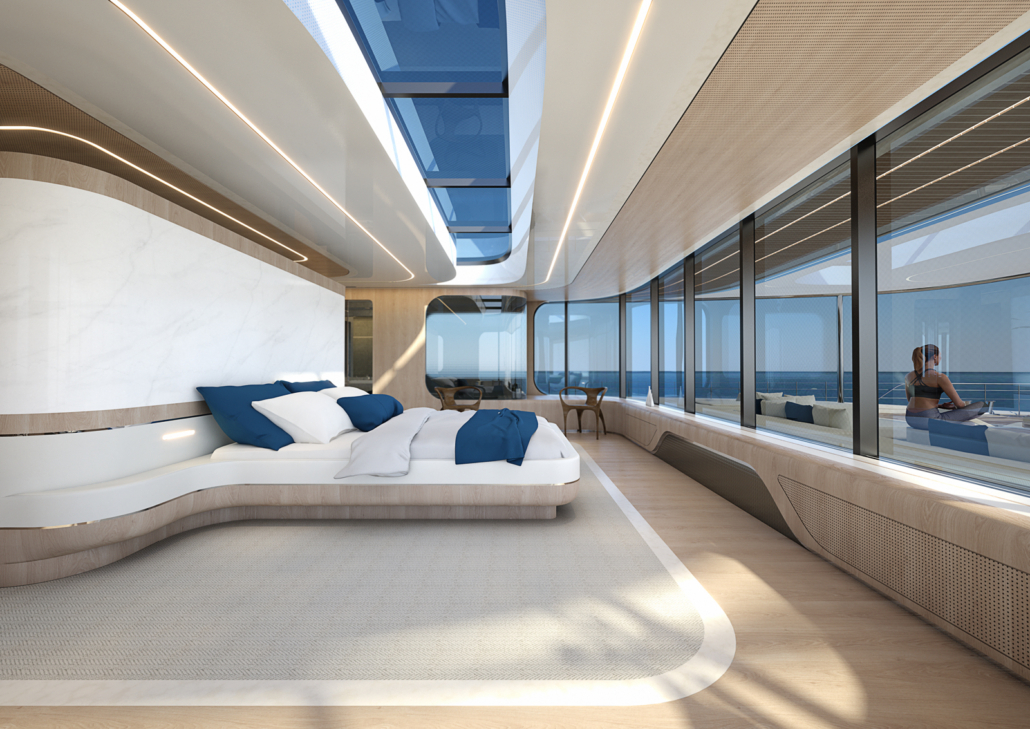 Multiple interior and outdoor lounging and dining areas, as well as a media room with entertainment technologies, are integrated into the design together with a large owner’s suite and four guest cabins. The size of these areas is exceptional: the master bedroom enjoys a 180-degree view with a composition of skylights that allow light to filter in from above. The yacht’s interior spaces interconnect, a feature that makes the design unique. The owner’s suite provides access to the forward outdoor lounge area, which can be shaded by retractable structures. 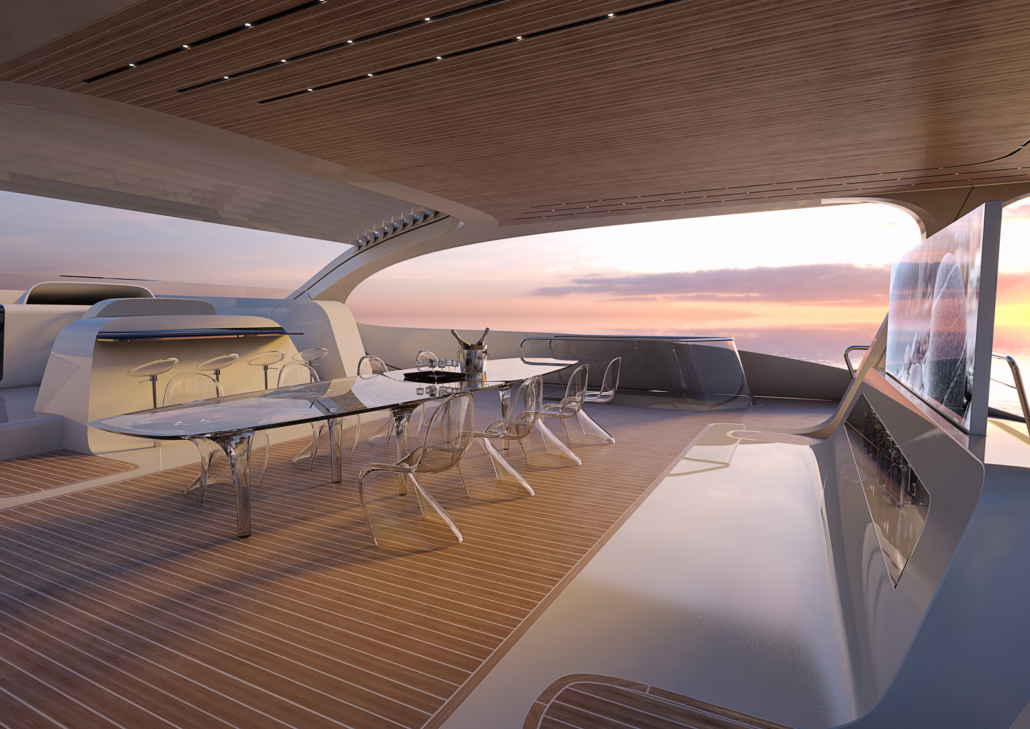 The visual and tactile characteristics of the materials within these spaces were selected and arranged to define an immersive environment that accentuates the fluidity of the design. The consideration of weight is crucial to all yacht design and for Oneiric the lightweight interior materials – many of which are recycled and recyclable – were chosen for energy efficiency and optimal performance. 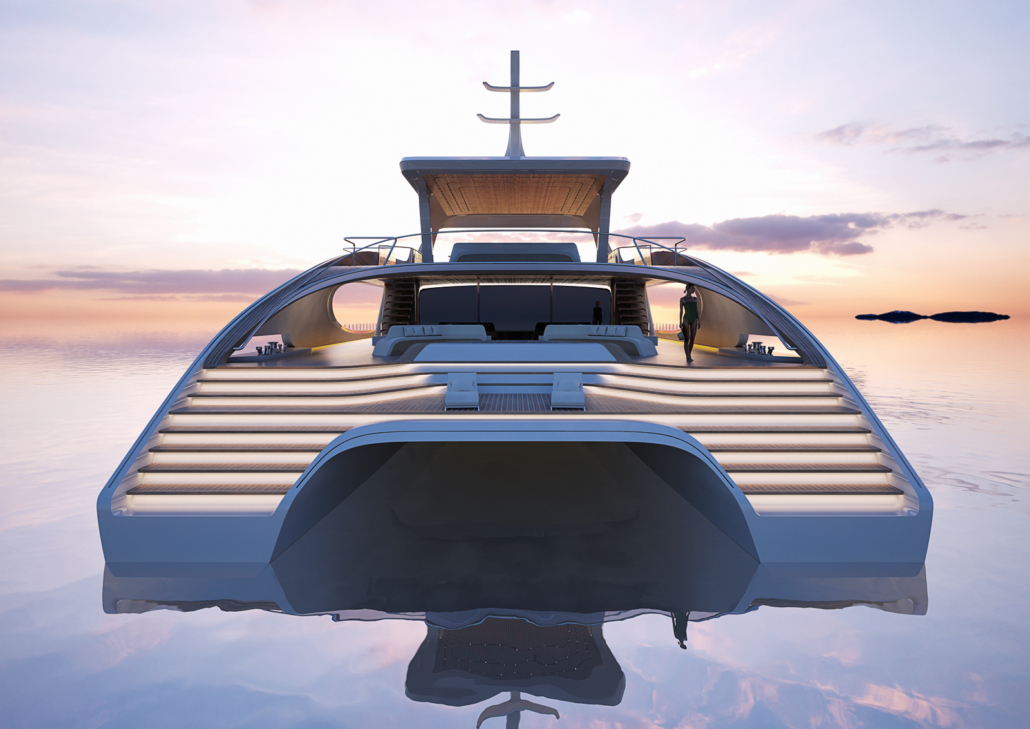 The serenity on board is visual as well as auditory. Oneiric‘s full-electric mode is capable of silent operations. In addition, the yacht benefits from the effects of Rossinavi Zero Noise technology that isolates all noise on board from the original source. This innovation has been installed on board all Rossinavi yachts for several years. With sound reduction already high, on this electric vessel the sound isolation will be even more efficient.