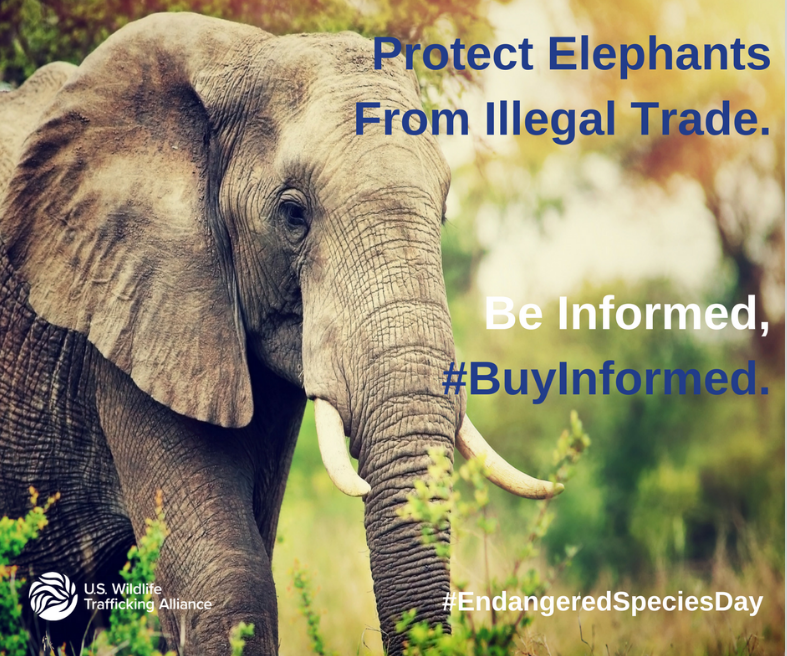 Endangered Species Day 2017 will be celebrated around the world, with major events led by the U.S. Fish and Wildlife Service (USFWS) and the Endangered Species Coalition that will take place all over the country. The USFWS is promoting a variety of engaging activities at zoos and aquariums across the nation on endangered species day to educate young people on conservation efforts being made for endangered wildlife and how they can be a part of the solution. The Endangered Species Coalition aims to educate people of all ages about the importance of protecting endangered species and everyday actions they can take to help protect them locally for impacts on a global scale.

About the U.S. Wildlife Trafficking Alliance

The United States Wildlife Trafficking Alliance is a coalition of nonprofit organizations, companies, foundations and media interests working closely with the U.S. government to combat wildlife trafficking by raising public awareness, reducing consumer demand for wildlife and wildlife products, and mobilizing companies to adopt best practices and help close off wildlife traffickers’ supply chains. Since its formation in 2016, the Alliance’s network of partners has expanded across the corporate and nonprofit sectors, including leading companies in travel and tourism, e-commerce, fashion and jewelry, communications, non-governmental organizations, and other key sectors. 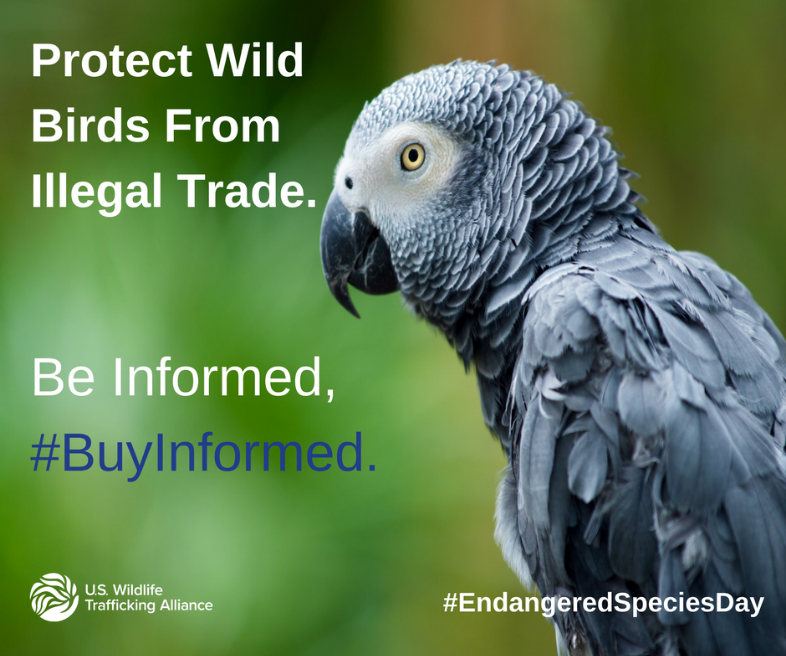 Wildlife trafficking is an international crisis, with an unprecedented increase in illegal wildlife trade throughout the world in the past thirty years. Populations of endangered species have plummeted, yet the illegal trade shows no indication of slowing down. An unprecedented global demand for exotic wildlife products has triggered an industrial-scale killing spree of endangered species like elephants, rhinos, tigers and other endangered animals. Wildlife trafficking, which depends on the killing of hundreds of thousands of animals, is a multi-billion-dollar criminal industry. Money from the illegal wildlife trade has been linked to terrorist organizations, drug lords, gangs, and corrupt governments—all at the expense of wild animals, the environment, and our national security.

As one of the largest markets for illegal wildlife products, the U.S. can help lead the way to reduce the scourge of killing around the world. In February 2014, the White House released the National Strategy for Combating Wildlife Trafficking, which called for a collaborative effort across all of society–including the corporate community–to raise awareness, change buying behavior, and fight wildlife trafficking by cutting off the demand for illegal wildlife products.  The U.S. Wildlife Trafficking Alliance was formed to help recruit and coordinate efforts by the non-profit, media, and corporate sectors to combat wildlife trafficking, in close collaboration with governmental entities.  The Alliance fosters joint activities and messaging that leverage the involvement of multiple actors and voices, including the business community.

The fight against wildlife trafficking is a bipartisan effort.  A unanimous Congress enacted the Eliminate, Neutralize and Disrupt (“END”) Wildlife Trafficking Act in October 2016.  The Act legislatively endorsed the Task Force and the National Strategy that, among other things, encouraged formation of the Alliance.  This bipartisan effort was led by U.S. Senators Chris Coons (D-DE) and Jeff Flake (R-AZ) and U.S. Reps. Ed Royce (R-CA) and Eliot Engel (D-NY). 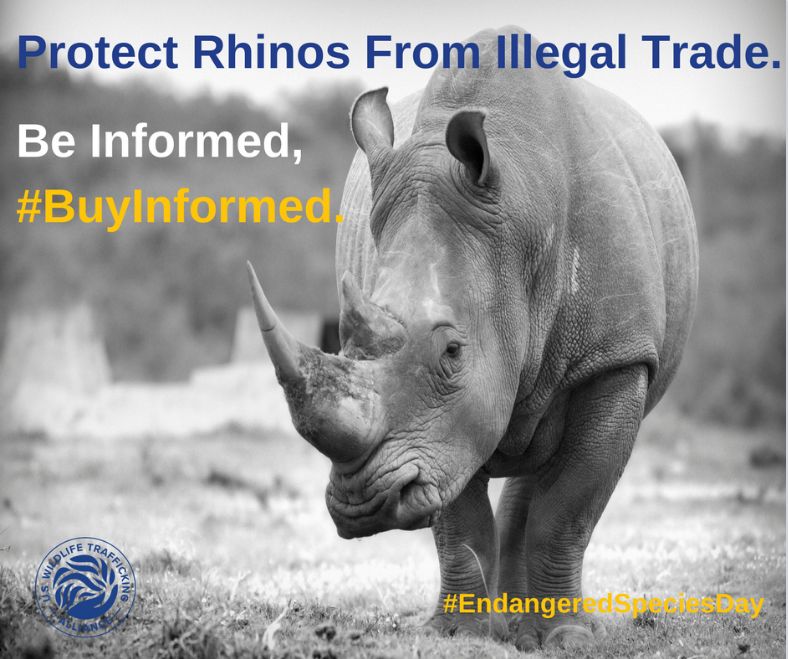 Although the loss of African wildlife garners the most attention, wildlife traffickers are decimating important wildlife populations in many nations. Important species are being poached in Latin America, the Caribbean, South America, Asia, and the U.S. And once the products are smuggled out of the home country, they enter an industrial-scale illegal trade that spans the globe. Wildlife experts have confirmed that if we don’t act quickly, trafficking will wipe out many endangered species in our lifetime.

Wildlife trafficking is a multi-billion-dollar transnational criminal activity that is not only a critical conservation issue, but is also a threat to security. It is ranked as the fourth most profitable transnational crime, only behind the drug trade, arms trade, and human trafficking. Wildlife trafficking undermines conservation efforts, fuels corruption, threatens the rule of law, and destabilizes communities that depend on wildlife for eco-tourism revenues.

The Root of the Problem: Demand

Consumer demand is what is fueling the industrial-scale killing of wildlife. The desire to own exotic items like jewelry, carvings, fashion items and accessories, is driving animals to extinction. Because the demand is so high, the price of illegal products on the market is skyrocketing. Rhino horns can fetch prices as high as $30,000 a pound, and ivory can command prices as high as $3,000 a pound. As long as there is demand, the price will be high enough to ensure there will always be poachers willing to kill animals. 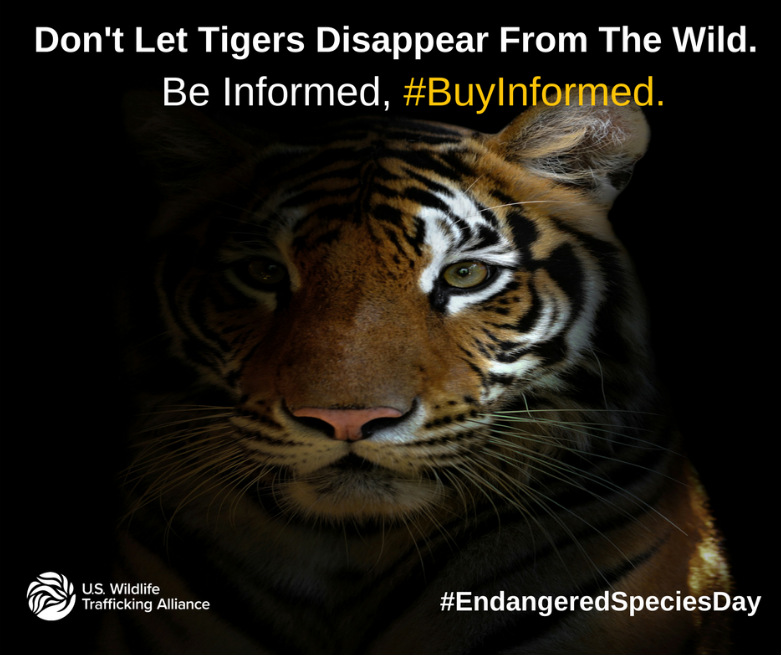 In September 2015, the United States and China announced a deal to work together to enact “nearly complete bans” on the import and export of ivory. The agreement between U.S. President Barack Obama and China President Xi Jinping means that China, the world’s largest consumer of ivory, will begin cracking down on a booming domestic trade. The U.S. made good on its promise, implementing a near-total ban on the sale of ivory in the United States in mid-2016. And China recently announced that it will ban all commerce in ivory by the end of 2017.

Countries around the world are taking a stand against the illegal trade and burning elephant ivory and rhino horn stockpiles—sending a clear signal to the traffickers that their activities are not welcome there. The U.S. Fish & Wildlife Service organized an ivory crush in November 2013. In Denver, home of the USFWS repository of illegally confiscated wildlife parts, they crushed over six tons of ivory. Two years later, another one ton was crushed in Times Square. Similar events have been held in Hong Kong, the Philippines, Gabon, Kenya, Vietnam, and elsewhere. The ivory burn in Kenya in April 2016 destroyed an unprecedented 105 tons of illegal elephant ivory and rhino horn.

The recent CITES conference in Johannesburg, South Africa was another positive step in the right direction. CITES (the Convention on International Trade in Endangered Species of Wild Fauna and Flora) is an international regulatory treaty among 182 member states.  It was formed in 1973 and regulated the international trade in over 35,000 wild species of plants and animals.  The Conference meets about once every three years.  The 17th Conference of the Parties to CITES (CoP17) was held this year in Johannesburg and was considered one of the most successful conferences in its history. The United States, along with other countries and partners, pushed for, and achieved, the highest level of protection for pangolins —the world’s most trafficked mammal —the African grey parrot, and fishhook cacti and greater protection for the chambered nautilus, devil rays, softshell turtles, and chameleons. You can read more about the CITES wins for wildlife here.

Governments can, and should, be doing more to stop the illegal trade. The recent U.S.-China agreement to end domestic ivory markets gives us hope that diplomacy is working.

But because consumer demand for animal products is fueling the illegal trade, the killings will continue as long as there is demand in the U.S. and in other major markets for illegal wildlife products. In a very real way, consumers hold the key to ending trafficking and helping to save the world’s most iconic species for the benefit of generations to come. As WildAid’s tagline explains it: “When the buying stops, the killing can too.”