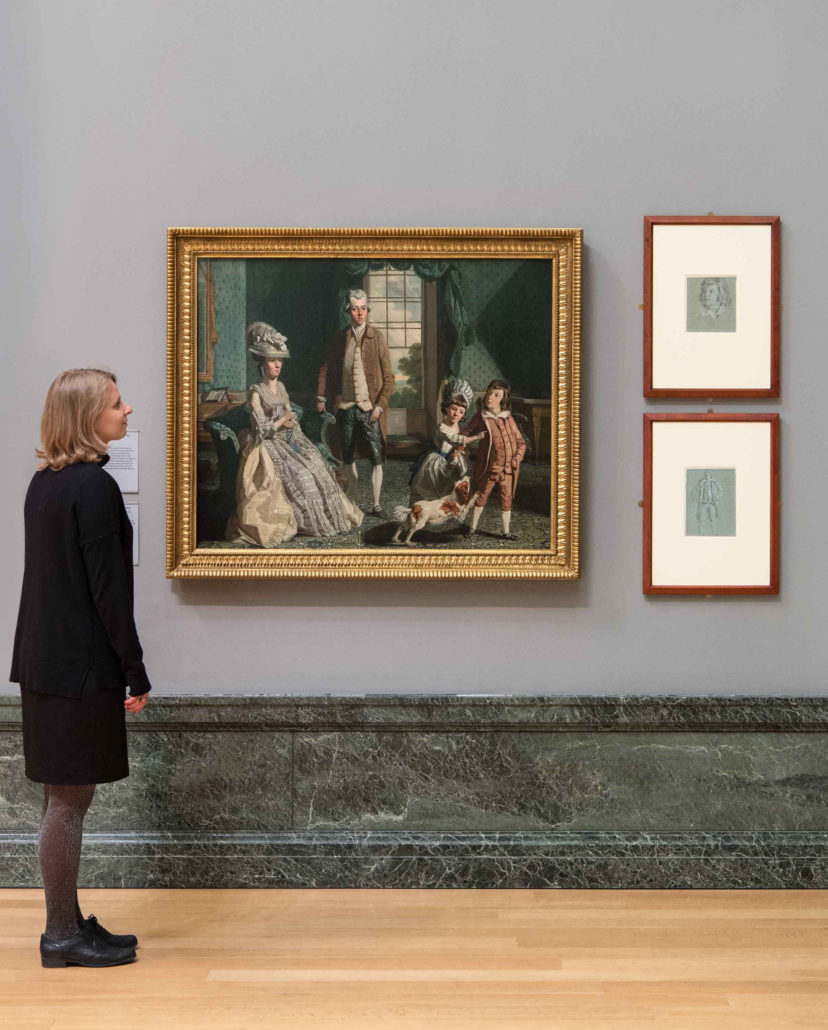 LONDON – John Singleton Copley’s The Fountaine Family 1776 has been accepted for the nation through Arts Council England’s Cultural Gift Scheme and allocated to Tate. Copley was considered to be the leading painter of his day, and this is the only conversation piece by the artist to enter a public collection in the UK. The group portrait, donated by David Posnett OBE, is a rare example of work from the beginning of the artist’s career in England. It is now on public display for the first time and is accompanied at Tate Britain by two preparatory drawings which feature the young boy in the painting, Andrew Fountaine.

Copley was the greatest American artist of the 18th century. He was active as a portrait painter in Boston from 1753 to 1774, establishing himself in London in 1775 where he was elected a Royal Academician. The Fountaine Family shows how Copley adapted his style to the British market, emulating the work of Johann Zoffany (1733-1810), whose renewal of the conversation piece format in the 1760s greatly influenced British art.  The painting depicts Brigg Price Fountaine, a wealthy member of the Norfolk gentry, standing in the center of an elegant drawing room at Narford Hall, the Fountaine ancestral home. To the left is his wife Mary and to the right are their two children, Andrew and Elizabeth, with a spaniel playing at their feet. Andrew is also depicted in the two preparatory drawings by Copley hung next to the painting.

The painting remained with the Fountaine family for many years, before being offered at auction in the late 1980s, described simply as English School, circa 1780. Art historical research and technical examination since then demonstrated the attribution to Copley. The two preparatory drawings discovered at The Courtauld Institute of Art in 1988 provided decisive evidence of Copley’s authorship. These drawings will be hung alongside the The Fountaine Family for the first time as part of Tate Britain’s new display.

The Fountaine Family sheds light on a new dimension of Copley’s career and adds substantially to Tate’s representation of this leading 18th-century painter. The work is uniquely important in showing an American painter making the transition into the British art world, at precisely the moment of the Declaration of Independence and the foundation of the United States. Copley, a loyalist, would never return to America.

Alex Farquharson, Director of Tate Britain, said: “We are delighted to have received this generous gift from David Posnett OBE through the Cultural Gifts Scheme. Examples of Copley’s early British portraiture are rare, and this work adds great depth to our understanding of his career in London.”

The Cultural Gifts Scheme was introduced by the Government in 2013 as an initiative to encourage life-time giving to UK public collections. The addition of The Fountaine Family not only improves Tate’s existing collection of eighteenth-century conversation pieces, but it also illuminates how an ambitious American artist adapted to a distinctly British format and style. The work complements the three Copley works already in Tate’s collection – Portrait of Mrs Gill c1770-1 painted in America; and two major subject paintings painted in Britain, The Death of Major Peirson 1781 and The Collapse of the Earl of Chatham 1779-80.