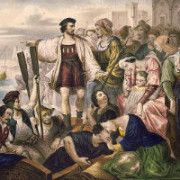 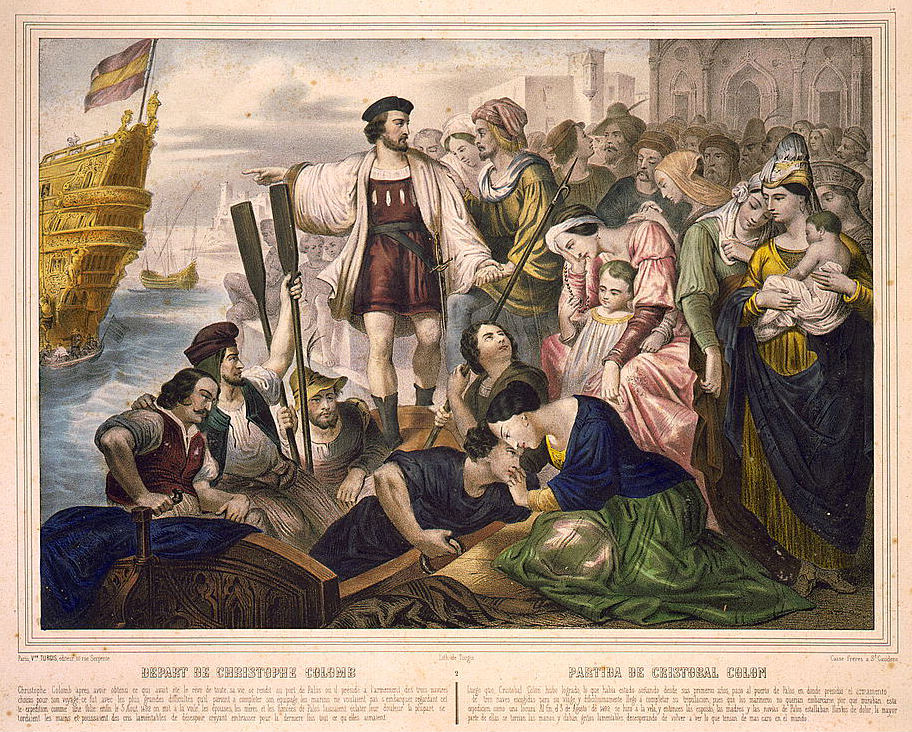 A 19th century lithograph depicting Christopher Columbus and his crew leaving the port of Palos, Spain, for the New World. Image courtesy of the Library of Congress

ROME (AP) – The U.S. has returned to Italy a letter written by Christopher Columbus in 1493 announcing his discovery of the New World that was stolen from a Florence library and unwittingly acquired by the Library of Congress.

END_OF_DOCUMENT_TOKEN_TO_BE_REPLACED 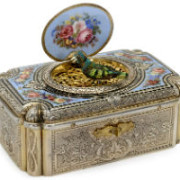 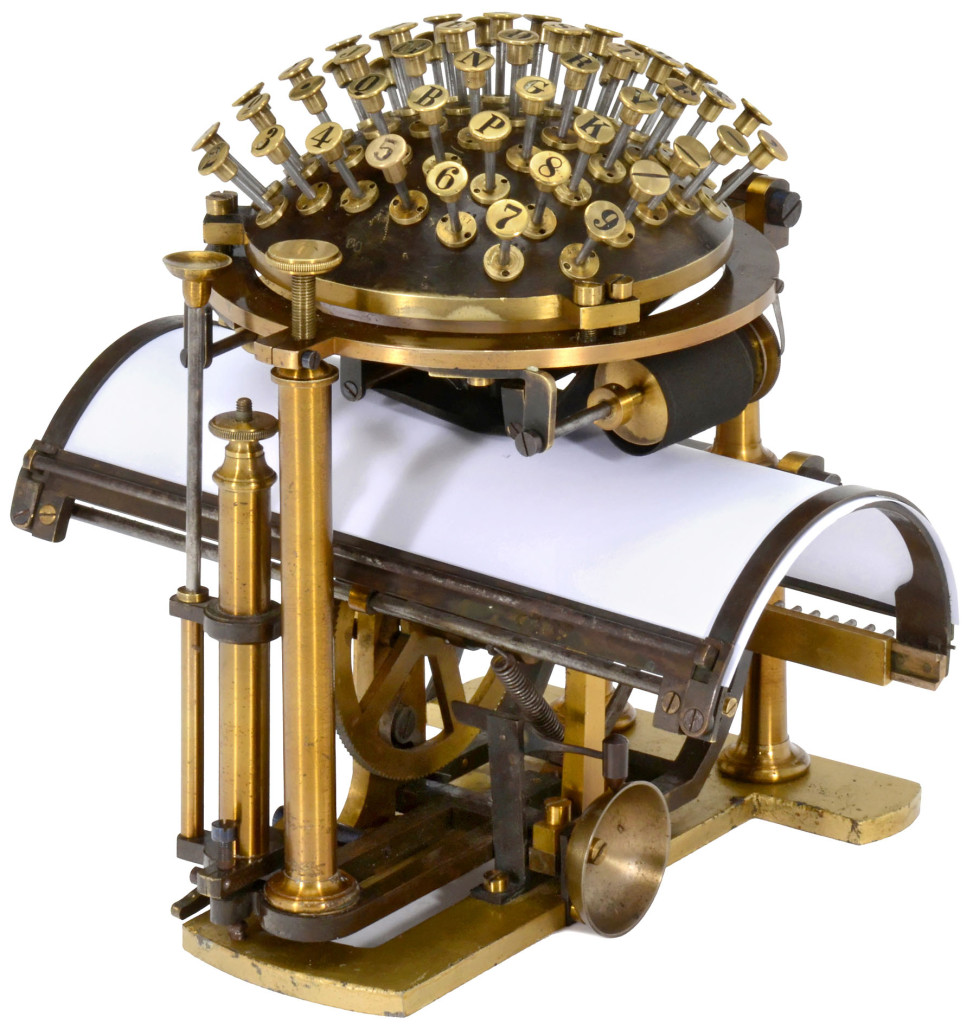 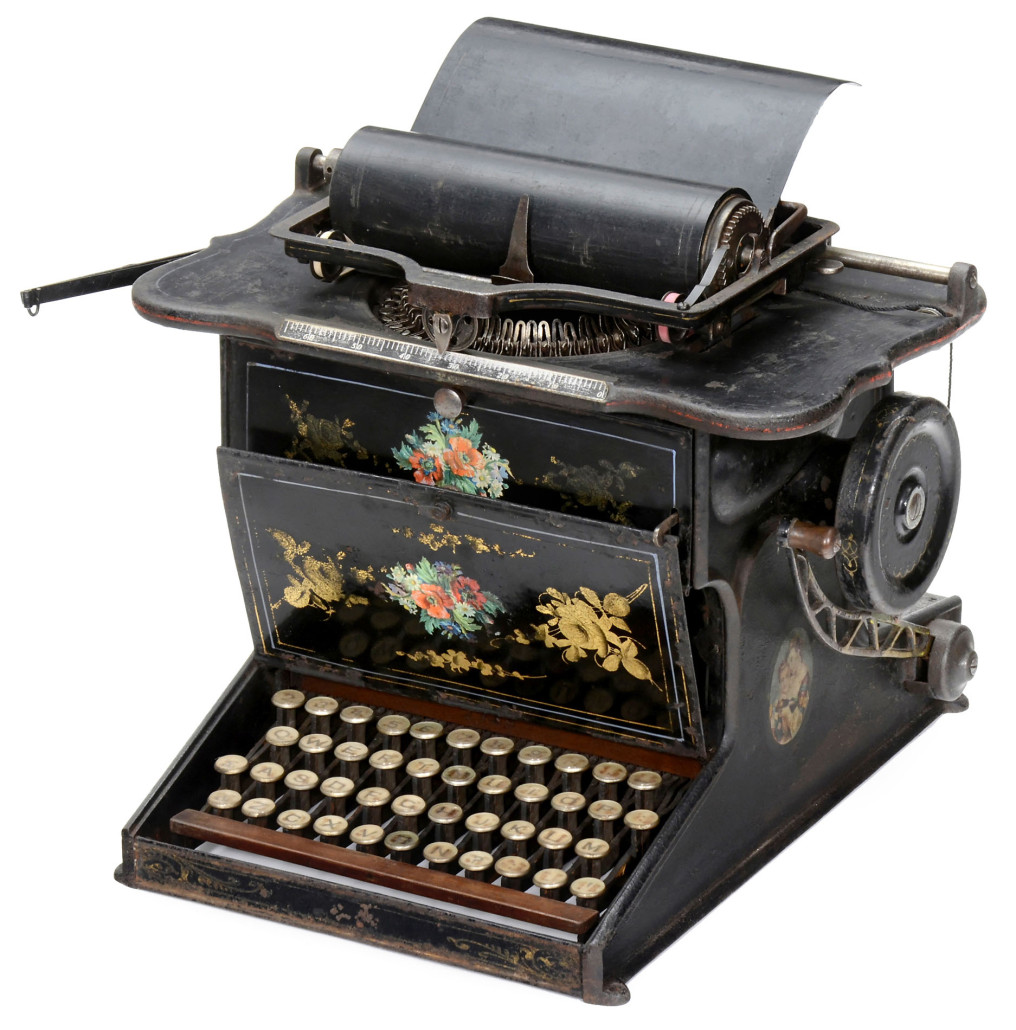 Absentee and Internet live bidding will be available through LiveAuctioneers.com

The auction captures mechanical complexity in many forms, from calculation and cryptology to instruments of science and philosophy.

Sometimes a function of time and navigation is indicated, for example in the equinoctial dial by Andreas Vogler, which combines a compass, sundial and the engraved latitudes of six European cities in a form of late 18th century pocket navigation system (Lot 201, below, estimate: €2.000–€3.000 / $2,200–$3,300). 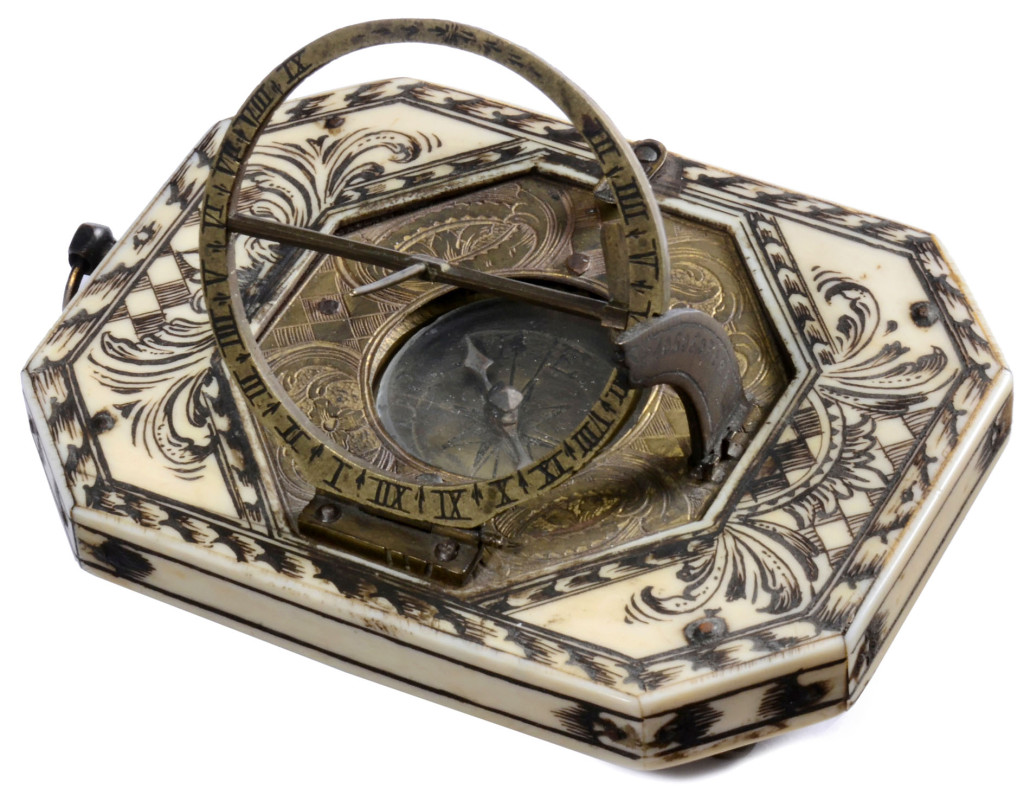 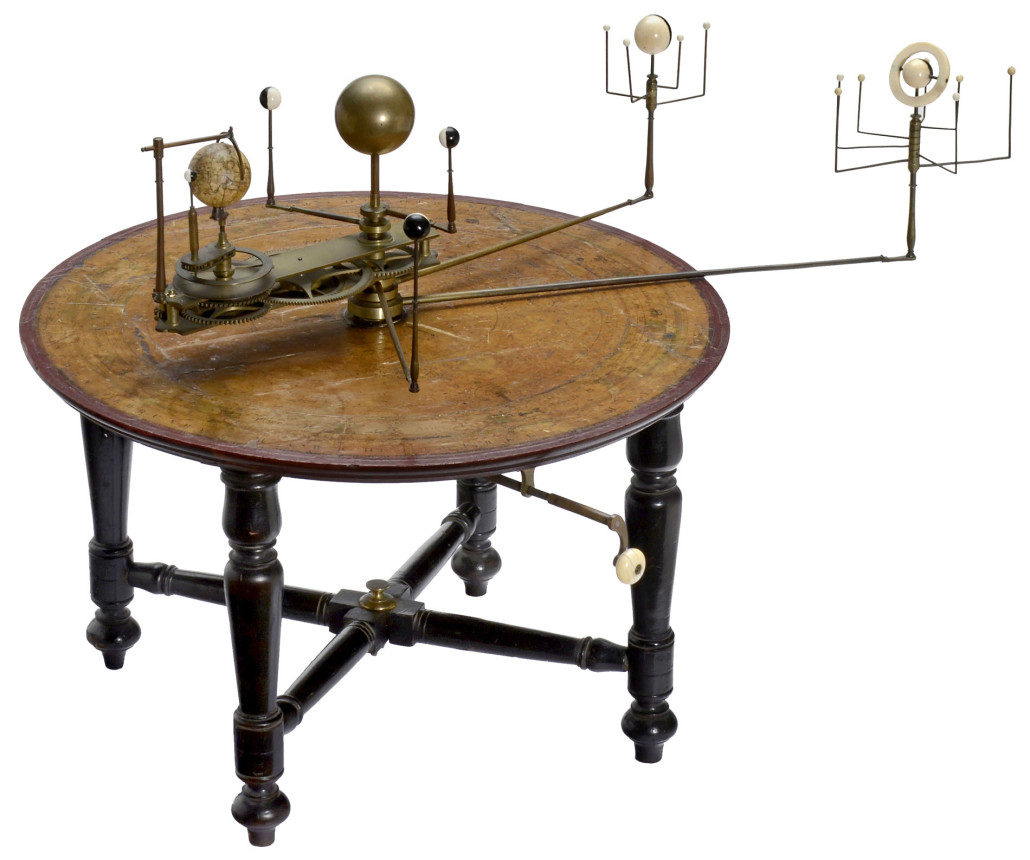 Meanwhile in Geneva, the Bruguier family had perfected the creation of miniature singing bird automata in princely boxes, such as this silver-gilt example decorated with enameled garlands of wild flowers and an Alpine scene on its lid (Lot 399, estimate: € 25.000–€30.000 / $28,000–$33,000). 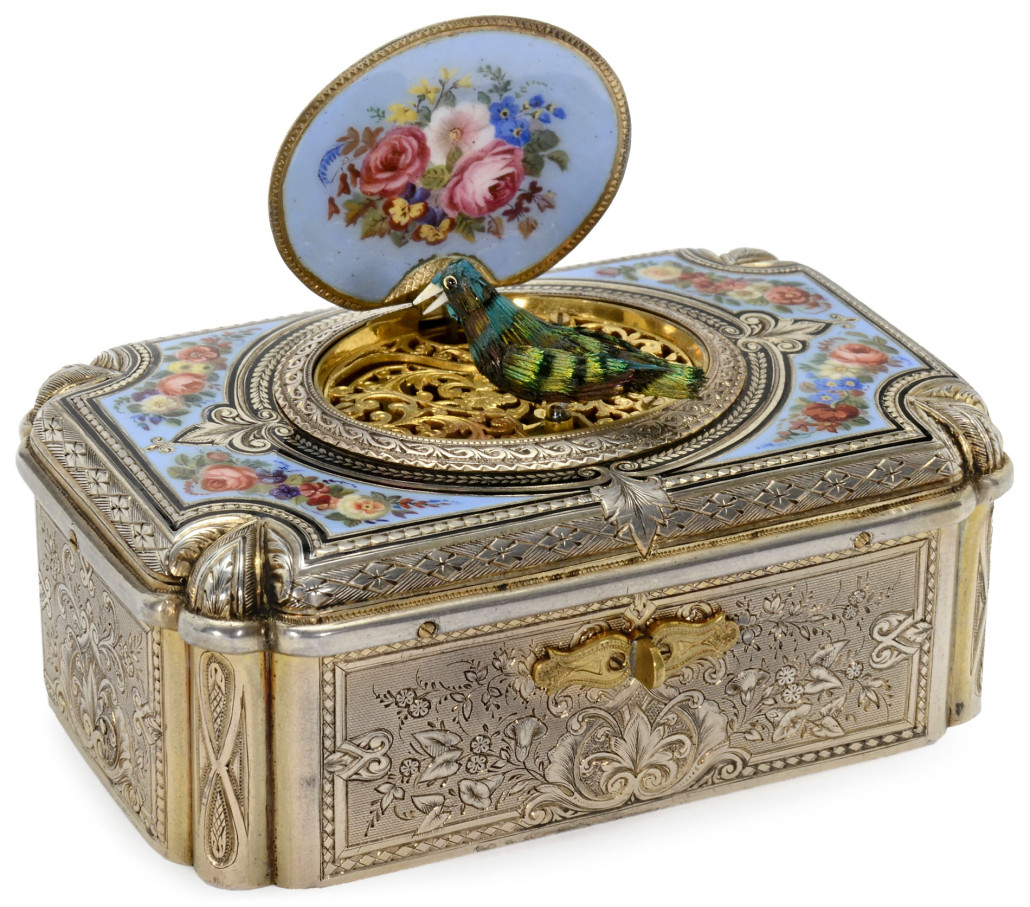 Artificial life was not only born in Switzerland. Parisian maker Blaise Bontems was prolific in the creation of singing bird automata in cages. Whereas the majority of his cages had lightweight gilt-wood bases, he also produced a small series in ormolu (bronze doré) and porcelain in reverence to the work of the 18th century master Pierre Jaquet-Droz. Breker’s auction presents a particularly fine model of an architectural cage that resembles an aviary, its base with four Sevres porcelain panels depicting courting couples (Lot 395, below, estimate: €15.000–€25.000 / $17,000– $28,000). 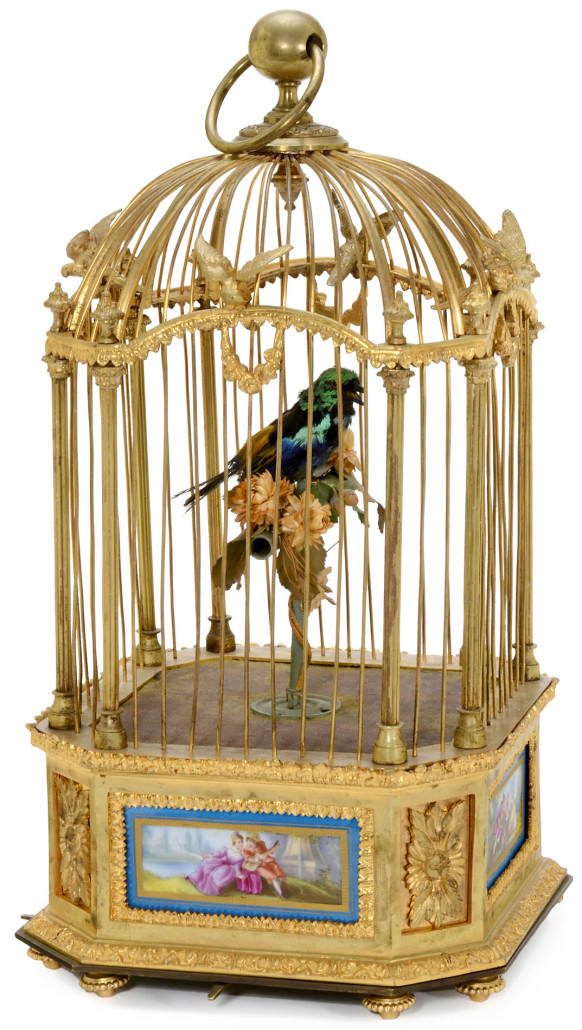 These and more than 600 other high-quality items will be sold at the Auction Team Breker event. 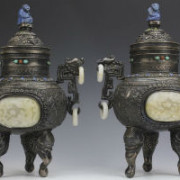 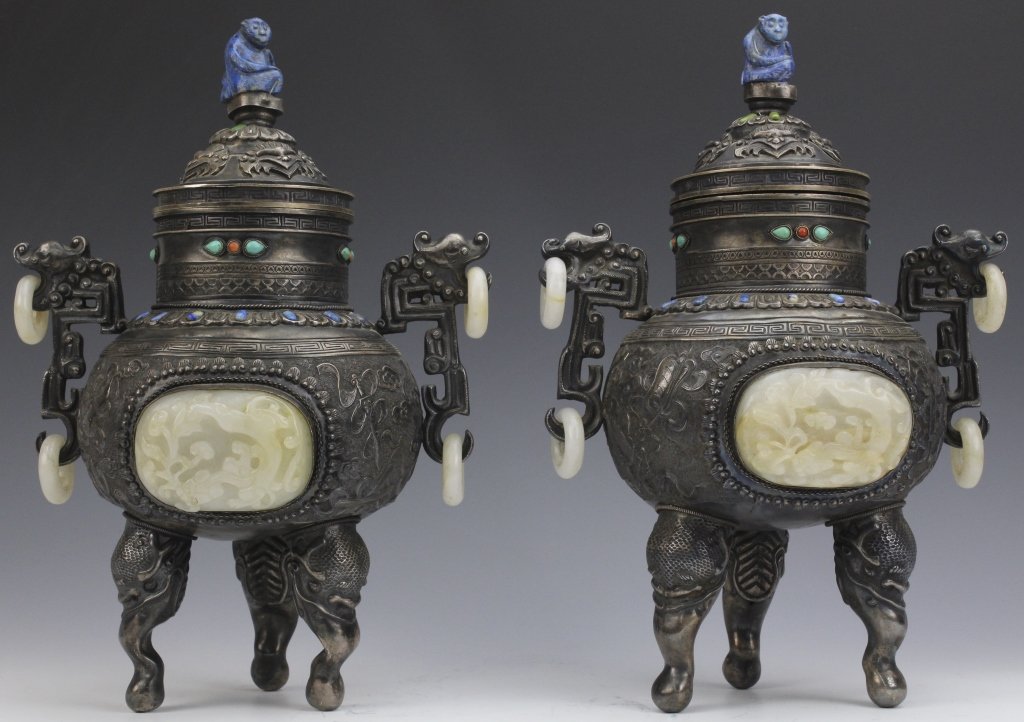 SUNRISE, Fla. – Hill Auction Gallery will sell the high-end collection of a Hollywood, Fla., socialite on Wednesday, May 25.

Absentee and Internet live bidding on the more than 400 lots will be available through LiveAuctioneers.com.

Asian pieces are highlighted by a pair of Chinese urns or censors (above) of sterling silver and carved white jade. They stand 11 inches high and are estimated at $3,000-$5,000.

Another highlight is a signed LaVerne “Chan” occasional table (below) by Philip and Kelvin LaVerne (below), which is pictured on page 17 of the Philip LaVerne Galleries catalog. The small table of bronze and pewter features polychrome detailing and an outstanding etched surface. 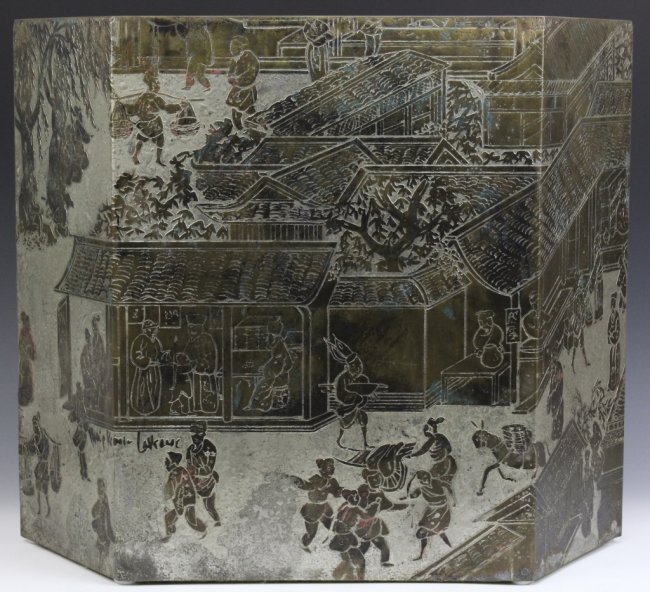 An authentic Bill Mack (Minnesota, b. 1949) bonded sand sculpture depicts a reclining female nude, whose hand and hair extend beyond the stepped frame. This large work (below) has a $1,200-$1,500 estimate. 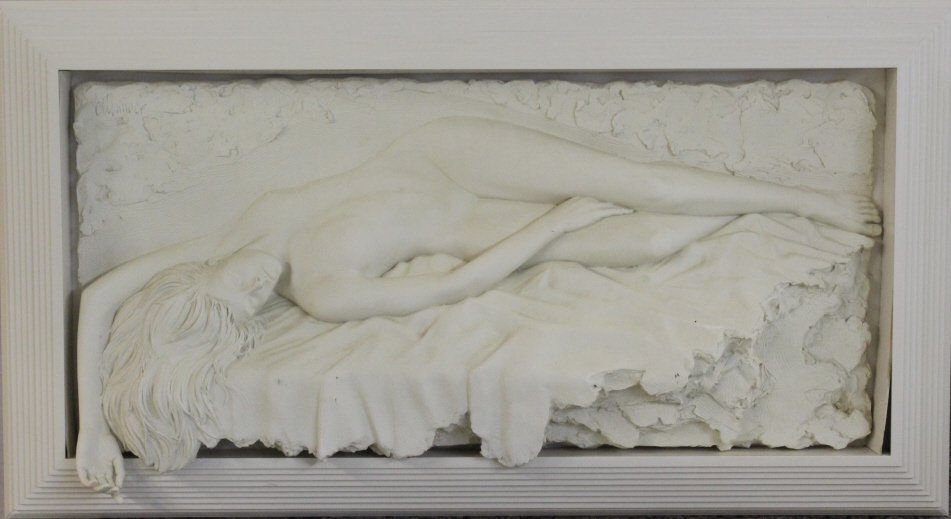 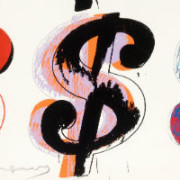 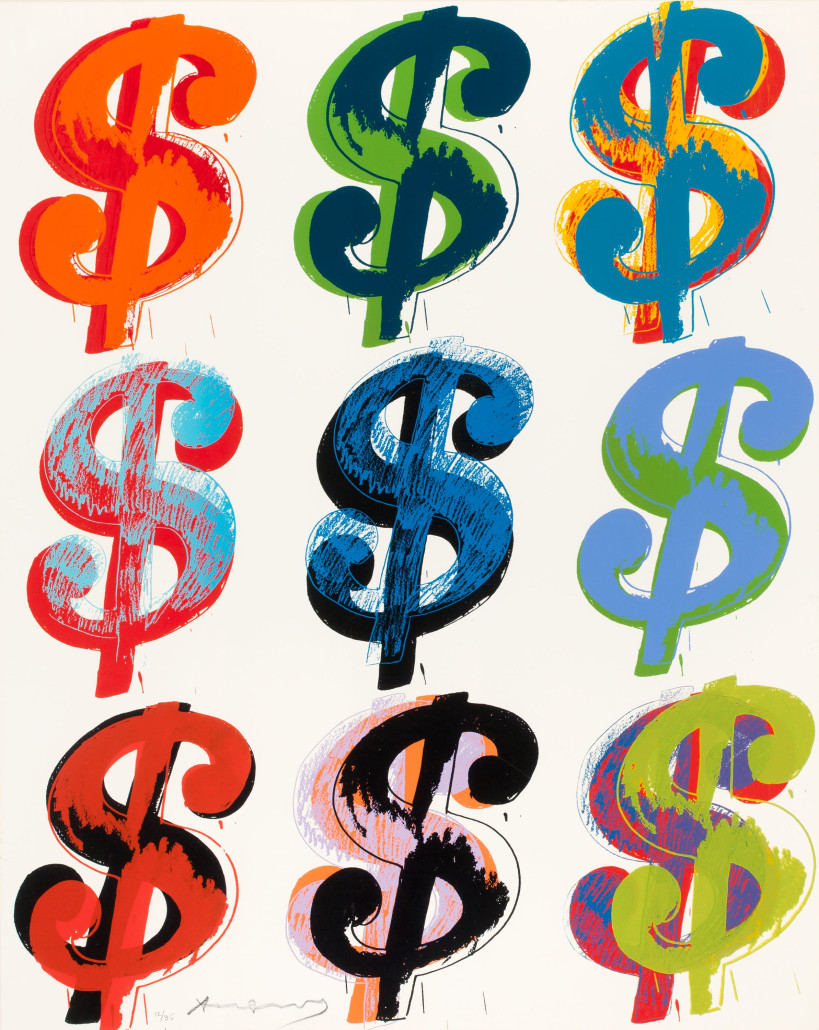 DALLAS – Heritage Auctions will present its first fine art auction dedicated exclusively to modern & contemporary prints and multiples on May 24.

END_OF_DOCUMENT_TOKEN_TO_BE_REPLACED 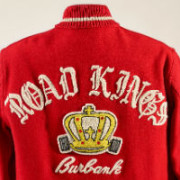 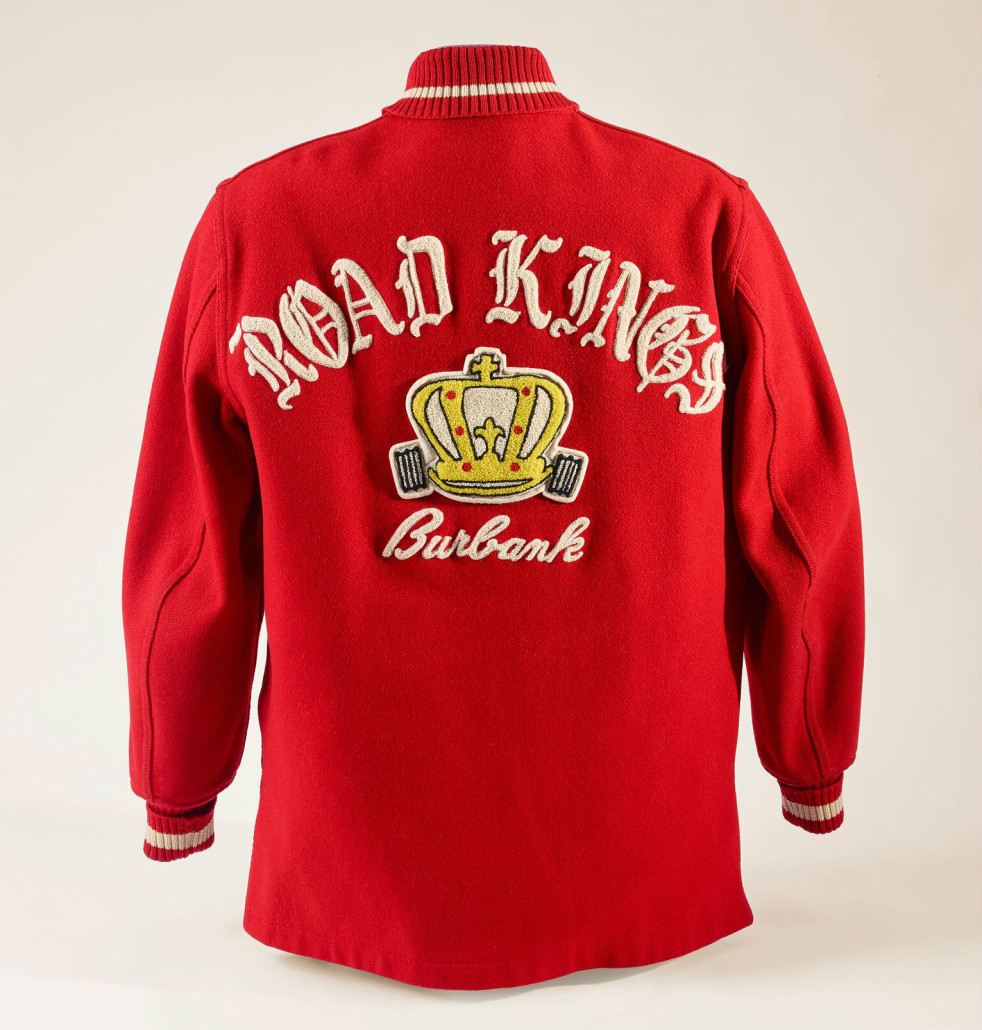 MILWAUKEE – The year of racing at the Harley-Davidson Museum continues to burn rubber this summer when “Drag Racing: America’s Fast Time” blows open its doors on June 17. Hot on the heels of the museum’s earlier exhibit openings – “Racing Machines from the KR to the XR” and “Photos from the Flat Track – Drag Racing” will go under the hood with the mad scientists of speed to see just how much blood, sweat and elbow grease hot rodders pour into their machines, two wheels or four, in their race against time.

END_OF_DOCUMENT_TOKEN_TO_BE_REPLACED 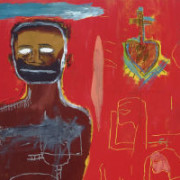 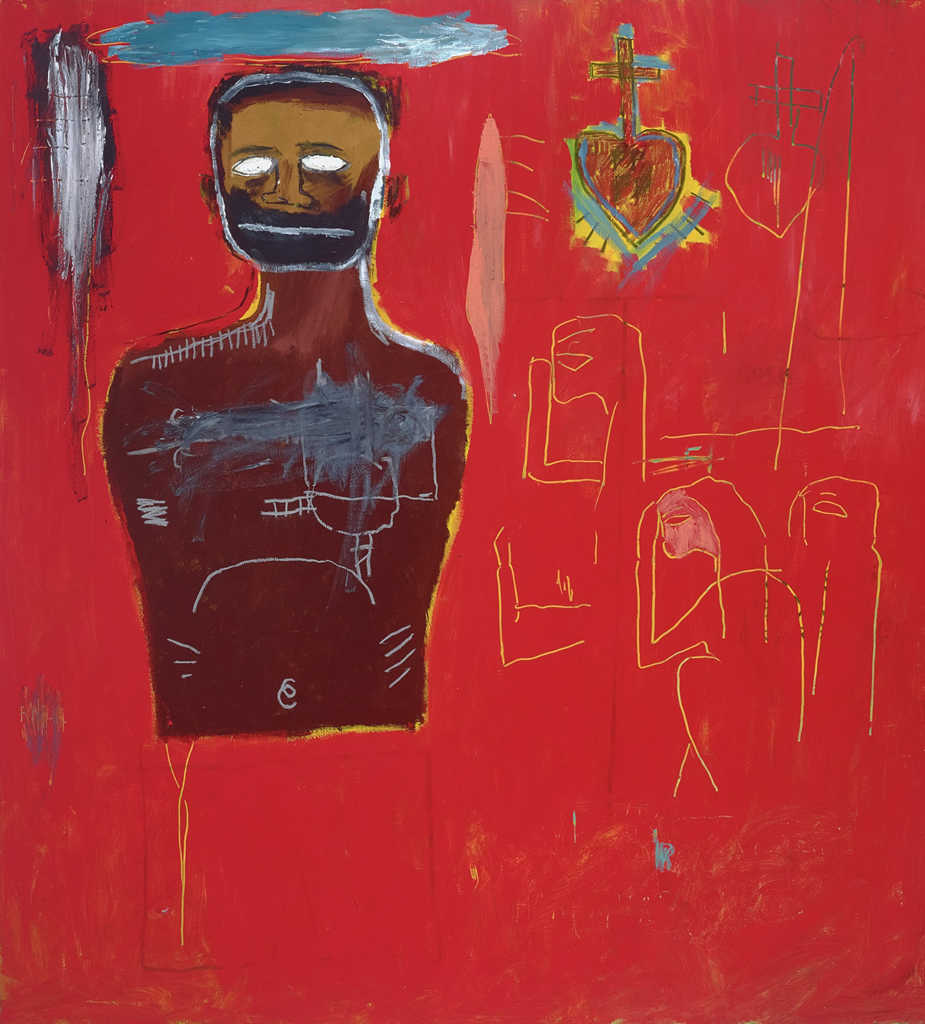 Jean-Michel Basquiat, Untitled (Cadmium), 1984, oil, oil stick, and acrylic on canvas. High Museum of Art, Atlanta. Basquiat drew his cryptic visual vocabulary from numerous sources ranging from ancient Egyptian art to books to the symbols of the Depression-era hobo code. Images of the Sacred Heart, a Catholic symbol of pain and suffering, symbolize personal anguish and the artist’s Haitian heritage. Basquiat continually juxtaposed such emblems in different combinations as if they were phrases of a personal language, like a visual diary.

ATLANTA – “Basquiat: The Unknown Notebooks” will close at the High Museum of Art on May 29. This exhibition features rare notebooks created by Jean-Michel Basquiat (1960–1988), offering an intimate look at the life of the influential contemporary artist who died tragically at age 27.

END_OF_DOCUMENT_TOKEN_TO_BE_REPLACED 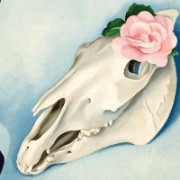 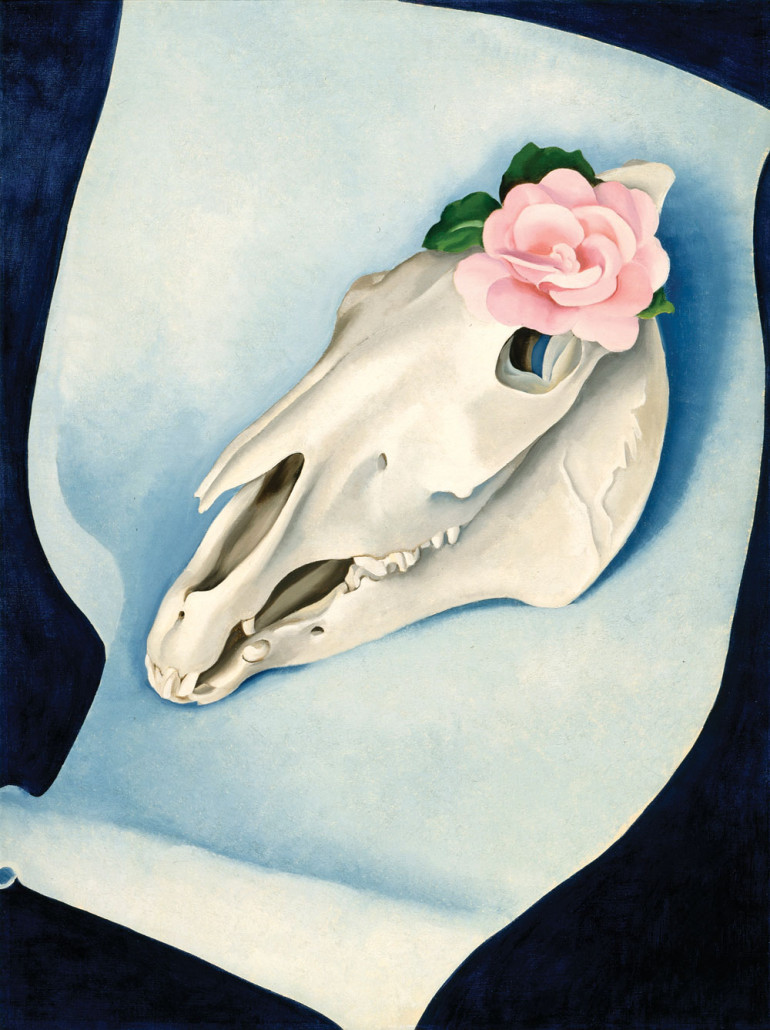 PORTLAND, Maine – “O’Keeffe, Stettheimer, Torr, Zorach: Women Modernists in New York” examines the art and careers of four pioneering artists and their contributions to American modernism in parallel for the first time.

END_OF_DOCUMENT_TOKEN_TO_BE_REPLACED 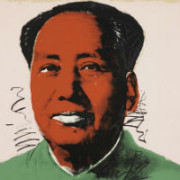 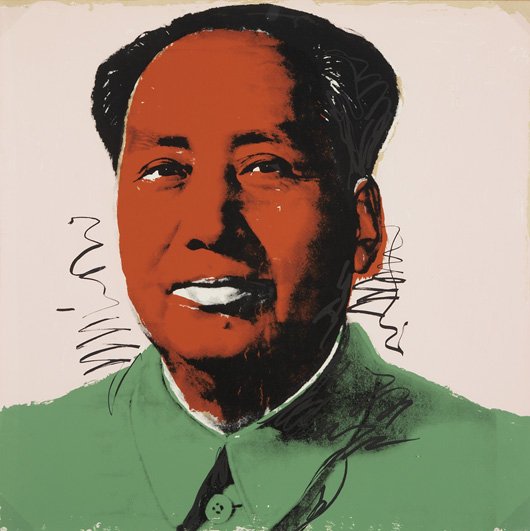 BEIJING (AP) – Exactly 50 years ago, China embarked on what was formally known as the Great Proletarian Cultural Revolution, a decade of tumult launched by Mao Zedong to revive communist goals and enforce a radical egalitarianism. The milestone was largely ignored Monday in the Chinese media, reflecting continuing sensitivities about a period that was later declared a “catastrophe.”

END_OF_DOCUMENT_TOKEN_TO_BE_REPLACED 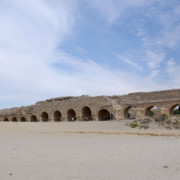 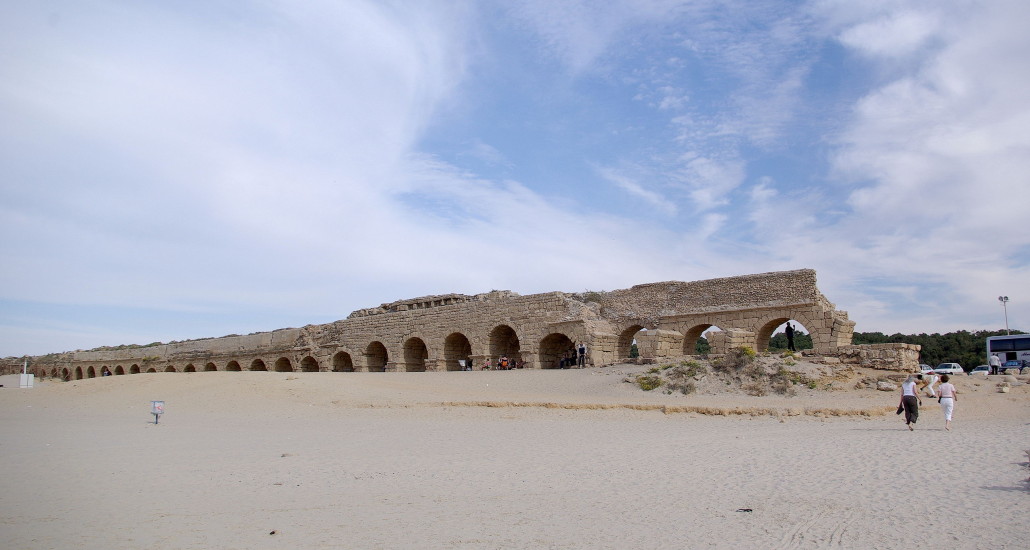 Roman high-level aqueduct on the beach at Caesarea. Image by Berthold Werner, courtesy of Wikimedia Commons

END_OF_DOCUMENT_TOKEN_TO_BE_REPLACED 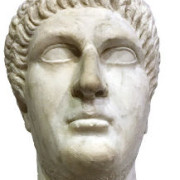 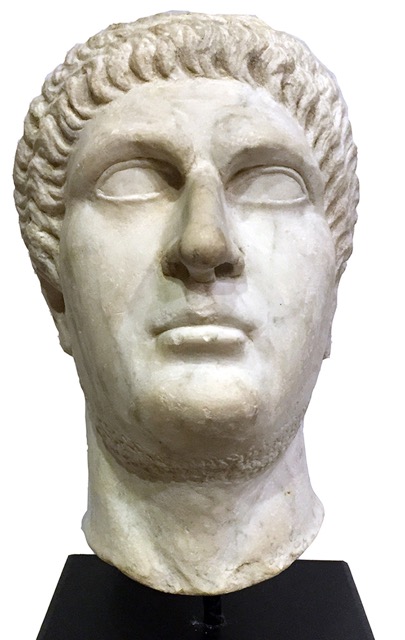 An oversized Roman Imperial marble portrait head, Neronian–Flavian Period, circa mid to late first century, most likely of the Emperor Nero with a partial ancient recut to more closely resemble the Emperor Otho. While portraits of Nero are rare those of the short-lived Otho, who ruled for only three months, are rarer still. Estimate: $50,000-$75,000. Ancient Resource LLC image